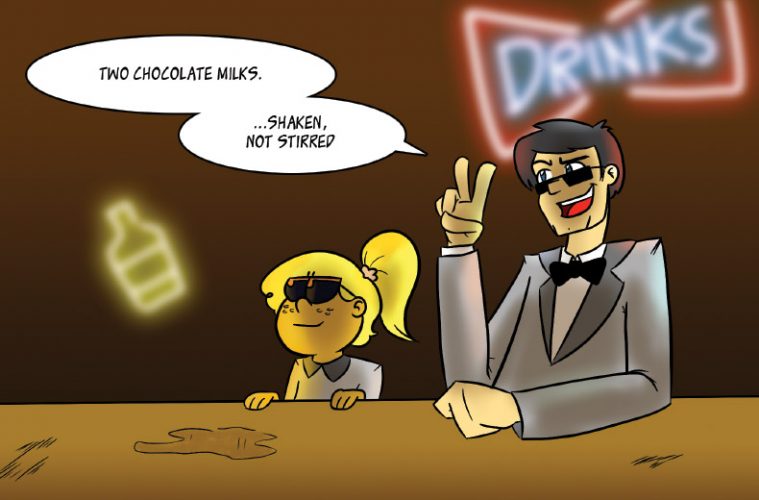 Ukulele Shopping in the Big D

After enjoying my trip to Minneapolis to check out drums last month, I got the call from my boss, M. She said to venture down south this time.

“We need you in the Big D,” she responded.

I took a moment to compose myself. “I’m sorry, M, but it just sounds really weird when you use a nickname for anything, let alone one as ridiculous as ‘the Big D,’” I replied. “It’s so not you. Just say Dallas for the sake of humanity.”

“You know, I’d fire you in a second if you weren’t so good at your job,” M shot back. “Do you ever stop wising off?”

“Do you really need to ask a question you already know the answer to?”

I arrived in Texas, where, as they say, everything is bigger. But this MI Spy doesn’t conform to anything, so I decided to look for one of the smallest instruments available: the ukulele, which is red-hot these days. (Almost as hot as the weather in the Dallas area!) Although the MI Spy always travels alone — with the exception of downing a few cocktails with some femmes fatales, of course — I figured I might be a bit over my head searching for a ukulele, which isn’t exactly my instrument of choice. (Yes, I admit it, but may never do so again.) Hence, I asked M for help. At first, I thought her suggestion was unusual, but it made plenty of sense — bring along a kid. Ukuleles are very popular with the youths, you see. So, I ventured out with one of our junior Spy trainees, Agent 0011, who oddly enough was about to turn 10 years old. It also just so happens she is obsessed with the Disney movie “Moana,” which features a ukulele-heavy soundtrack, so this worked out really well. So, we headed off to the Dallas area in search of her first-ever ukulele.

(On a serious note, I want to send out my deepest sympathies to all the people south of Dallas in Texas that dealt with the tragedy brought on by Hurricane Harvey, as well as the devastation caused by Irma, Jose and Maria in Florida, Puerto Rico and the Caribbean, the earthquake in Mexico and the horrific shooting in Las Vegas.)

Our first stop was Sky Guitars Music Store. There were only a few spots to park in the front of the store. Luckily for me, there was a spot open. The store is large, and the counter is the first thing you see, which I liked. As 0011 and I walked in, we were immediately greeted by a salesman. He asked if there was anything he could help me with, and I replied that my daughter was interested in ukuleles. He brought us to the right side of the store, where they had a wall full of ukuleles. I was surprised to see so many in one store. They started at $39.99 and went to a few hundred dollars. Different colors and sizes were also available. I was under the assumption that my non-Texas accent would give away my spy status, so I told him we had just moved to Dallas. Luckily, as the suave MI Spy, I know how to think on my toes.

The salesman told us that the Savannah Ukulele is a good starter instrument for $40. He also let us know that the more money we spent, the better the sound. His advice was also to find one that would inspire my daughter, which I thought was nice. He even decided to take a ukulele down and play us a little song. All in all, I thought that Sky Guitars Music Store was a great place to visit. It was welcoming and informative.

Guitar Center is located in an enormous mini mall. The parking lot was packed, and the 100-degree weather was wearing me down so much I had to ditch my tux. I gave myself a pep talk and concentrated on the mission. As we walked in, the air conditioning was a welcome greeting. There weren’t many employees around, but I did find a salesman behind the counter. I asked him if they had ukuleles, and he lead me to the back of the store. As we were walking, there was a customer playing an electric guitar. (I must say, he was a very talented man of mystery.)

In the back was a room dedicated to acoustic guitars. The corner held a few rows of ukuleles. I asked the employee if he had any recommendations for a kid who is just starting out. He replied by asking what my ideal price range is, and I told him I did not have one. He pointed out a Mahalo Kahiko Series, which did not have a price tag. He guessed it was around $40. He let me know that for a starter I should pay between $40 and $60. I asked if there was a favorite or best brand, and he said not for this price. We shook hands, and he let me know that if I had any more questions to ask one of the other salespeople. It seemed that this Guitar Center could probably prioritize training their employees better. Even a quick tutorial on guitars during orientation would be nice. I understand it’s a large store, but maybe someone should be looking out for the lost ukulele price tags.

McBride Music & Pawn is located in the downtown section of Denton, Texas. It exudes a historic feel. You could easily spend an entire day in the area. There is a lot of shopping and plenty of restaurants where you could stop and have a bite to eat. As 0011 and I walked up to the front of McBride Music & Pawn, I noticed that the store seemed as if it had been there forever. The store offers customers the option to pawn an instrument or purchase one.

I entered and asked if there were any ukuleles, and I was told by the employee that they had just sold out of them. He did follow up by adding that they had just put in an order for more. I must admit, I was a little disappointed that they were all out. I wanted 0011 to try them out. The employee told me that Kala is a popular brand for ukuleles. He told me to come back in about two weeks, when the order comes in. He also mentioned that they could even be in sooner than that. I thought that he was very helpful for someone who wasn’t really able to help me. Although the building is older, the staff is very helpful, and I would visit here again.

Glen’s Pawn Shop & Music Store is located on a busy street, but its bright-blue exterior makes it easy to spot. It is a large store with large, U-shaped counters. One employee was helping a customer over to the left, so 0011 and I decided to just take a look around. The employee soon let me know he would be with us in one minute. I thanked him, and told him to take his time. In the interim, I looked at everything they had to offer at the store. I was actually happy that it was busy because there was so much to look at, even oddities like collectable coins. Did they have a 1933 Saint-Gaudens Double Eagle? No luck! Originally worth $20 when minted, it’s now worth many millions of dollars if you ever find one … but I digress.

Anyway, back to music. It only took a few minutes before I was greeted by a salesman asking if I needed any help. He was very polite and helpful, even though they, too, were currently out of ukuleles. He informed me that they had an antique one in the back, but they were working on it. Nonetheless, he still went out of his way to help me. He let me know that the nicest brand they had in the store was Lanikai. He asked me the size that Agent 0011 wanted, and informed me that the smallest one is called a soprano. He then showed me a catalog of all the Lanikai ukuleles. Afterwards, he asked me to come back in a week or two, and said that he should have something in by then.

After a long day spent in the hot Texas sun, I was ready for a nap. But knowing an MI Spy’s work always comes first, I knew I had to pick a winner. It really was a close call. I would honestly shop at three of the four stores anytime. Although the stores were, for the most part, excellent, I decided the best place was Glen’s Pawn Shop & Music Store. (Leave it to M to save the best for last.) Glen’s impressed me because the employee (who I later discovered is the owner) took it upon himself to make sure I was helped. He was also very attentive to what 0011 and I were looking for. He listened well and helped where he could. I also got the impression that if his other employees weren’t being so attentive to other customers, they would have helped me, too. The store was clean, located on a busy street, and the bright blue and yellow exterior was extremely helpful when looking for the address.