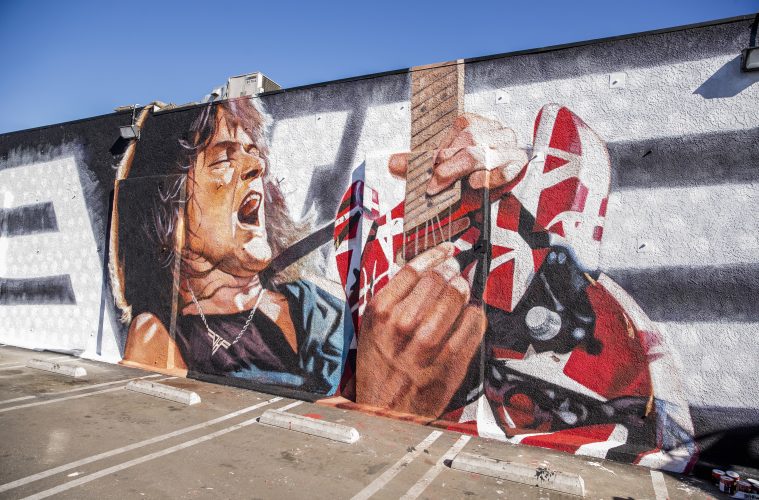 Guitar Center unveiled a new mural of Eddie Van Halen on the outside wall of its flagship store in Hollywood, Calif., located on the famous Sunset Strip. Since Jan. 26 marked the late guitar legend’s 66th birthday, renowned muralist Robert Vargas teamed with Guitar Center to pay tribute to the legacy of Van Halen with this striking mural, which depicts Eddie playing his iconic “Frankenstrat” guitar. Vargas donated his time and talent to design and create the mural, which measures approximately 17 feet tall x 105 feet long and covers the entirety of the store’s outer wall at its rear entrance.

“Eddie was one of my creative heroes,” Vargas said. “When I was young, the debut Van Halen record was the first album I ever owned. He influenced me over the years in so many different ways. As soon as the news hit of his passing, I knew I had to do something creative to memorialize him, and Guitar Center was the obvious venue. Right here on the Sunset Strip, where the band made their bones — I can’t think of a better place for this tribute to him, and I thank Guitar Center for giving me the canvas to share it with the world.”

Guitar Center’s Hollywood location has a history of paying tribute to Eddie Van Halen, with Eddie’s handprints being a centerpiece and main attraction of Guitar Center’s iconic RockWalk outside the store, along with several of his prized instruments and other memorabilia on display behind glass.

In addition to the monumental Eddie Van Halen mural on the flagship Guitar Center Hollywood store wall, the store also features a Jimi Hendrix mural, unveiled Nov. 3, 2018, in tribute to the musician. Outside the entrance to the store are concrete blocks bearing the signatures and handprints from more than 150 notable musicians (including Van Halen), producers, iconic bands, and music instrument manufacturers which have been recognized for achievements with induction into the world famous RockWalk.