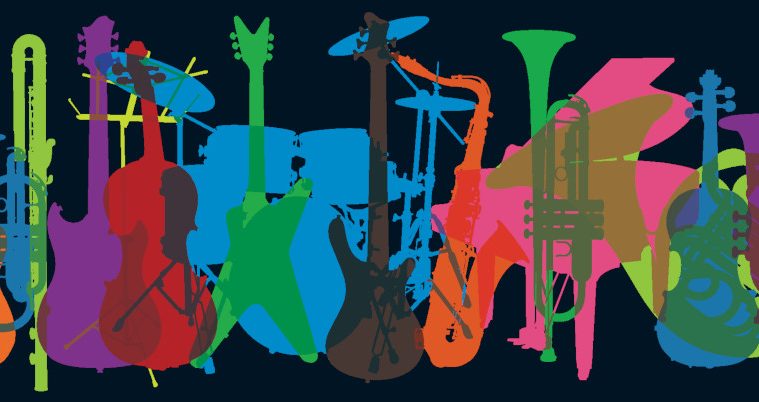 As the Music & Sound Retailer has detailed often, the COVID-19 pandemic lifted sales of certain MI products, while others saw a precipitous decline due to a lack of in-person schooling or live events. Pattern Data did a deep dive into online sales for musical instruments and accessories on Amazon. Which musical instruments experience the most online demand? Which ones saw the biggest bump right after lockdowns last year? What were the long-term effects of COVID-19 on musical instrument sales?

“Based on the data, it’s clear that the pandemic has been equal parts feast and famine for the music instrument industry. Instruments that are commonly picked up as a solo hobby, like guitars, ukuleles, pianos/keyboards, and drums, saw a significant boost in year-over-year demand while consumers spent more time at home,” Dallin Hatch, an expert from the Pattern Data science team, told the Retailer. “In contrast, instruments that are commonly associated with performance in a band or orchestral ensemble, like trombones, clarinets, and violas, experienced even bigger decreases in demand. This is representative of what we’ve been hearing anecdotally from K-12 music educators that many students are opting out of band-and-orchestra classes when they are not able to rehearse and perform in person due to the pandemic. Look for this trend to reverse over the course of the next year, as the U.S. phases out of social distancing measures.” 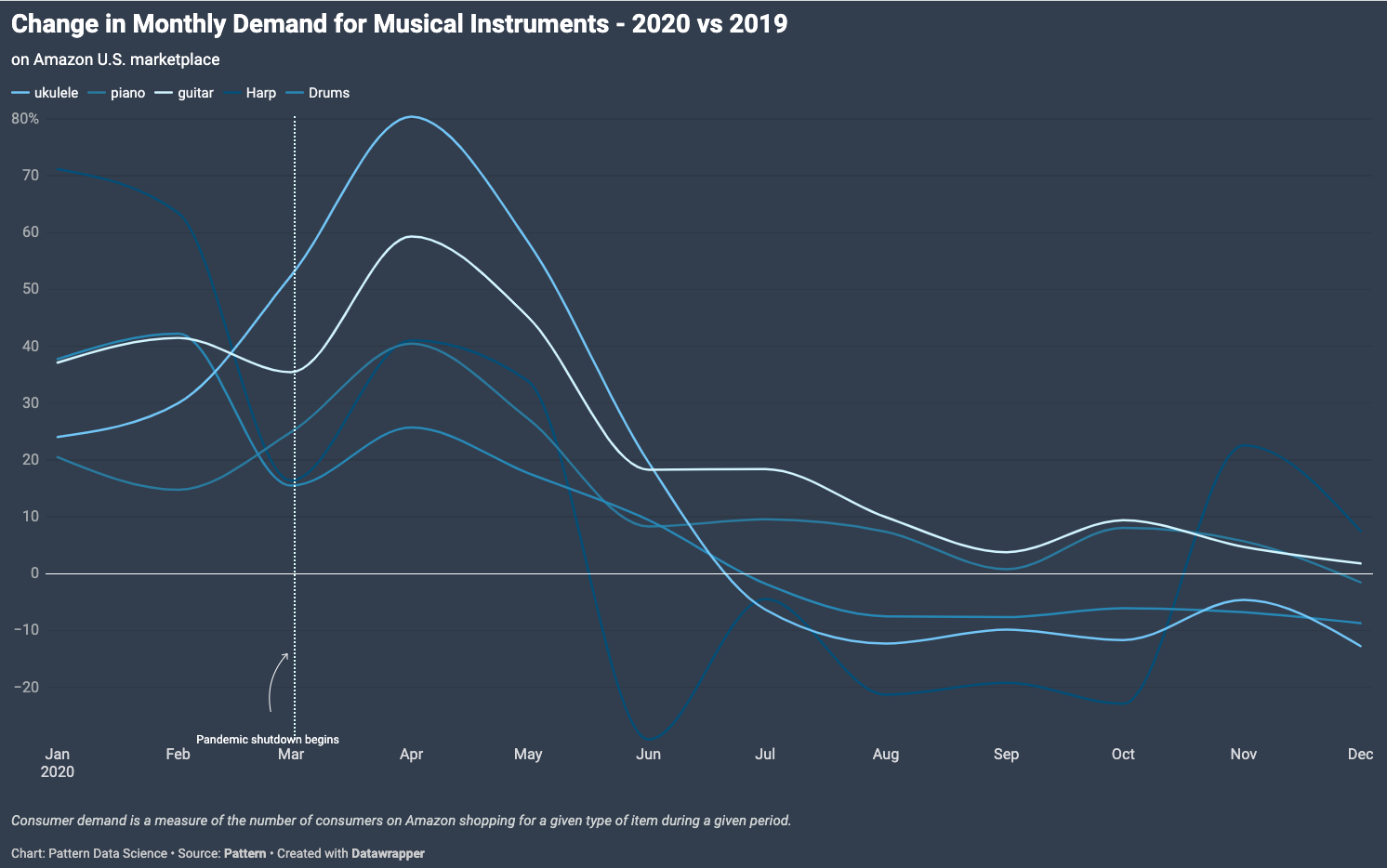 According to Pattern Data, no instrument saw a bigger surge in year-over-year demand during the first months of the pandemic than ukuleles (+66 percent). Guitars (+47 percent), pianos/keyboards (+32 percent), harps (+28 percent), and flutes (+27 percent) round out the top five. Conversely, trombones and violas saw the largest negative shifts in year-over-year demand during the beginning of the pandemic, each down -27 percent compared to March/April 2019. 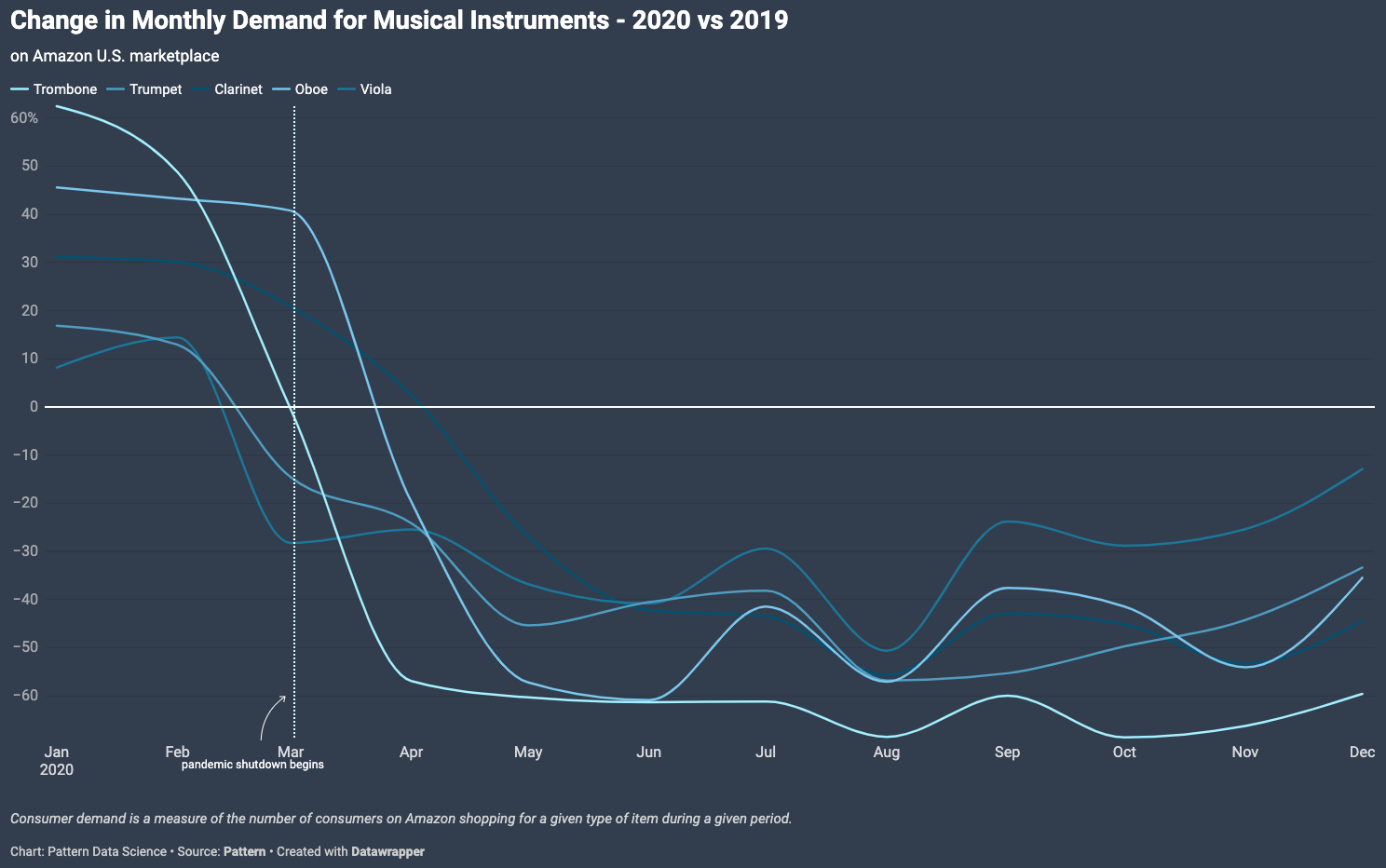 Which musical instruments were the most popular on Amazon in 2020?

Before diving deep into the data, Pattern started by comparing the major types of musical instruments on Amazon. Here’s a list of the instruments in our analysis and the total demand each received in 2020. “The piano may be the most commonly played instrument in America, but it’s no surprise that on Amazon it’s the guitar that reigns supreme. The guitar is so popular that it received 87 percent more demand than the rest of the instruments in our analysis combined,” stated the research firm. “The piano (which for our analysis includes keyboards) received the next most demand, while drums received the third most. Ukuleles were a strong fourth place, as you might expect people are far more willing to purchase a ukulele online than a more specialized or advanced instrument.”

How did COVID-19 impact market demand for guitars?

As the chart suggests, demand is likely to be extremely different depending on which musical instrument you examine. But since guitars represented such a massive slice of the pie, Pattern decided to start first by examining demand for guitars throughout 2020. Here’s what it found: Initially, COVID-19 appears to have had a negative impact on demand for guitars. Demand plummeted in early March during the uncertain early days of the pandemic. But by the week of March 22, as Americans began to understand the implications of a future sheltering in place, demand rebounded sharply. Demand for guitars then settled to consistent levels before reaching their highest levels during the holiday shopping season. 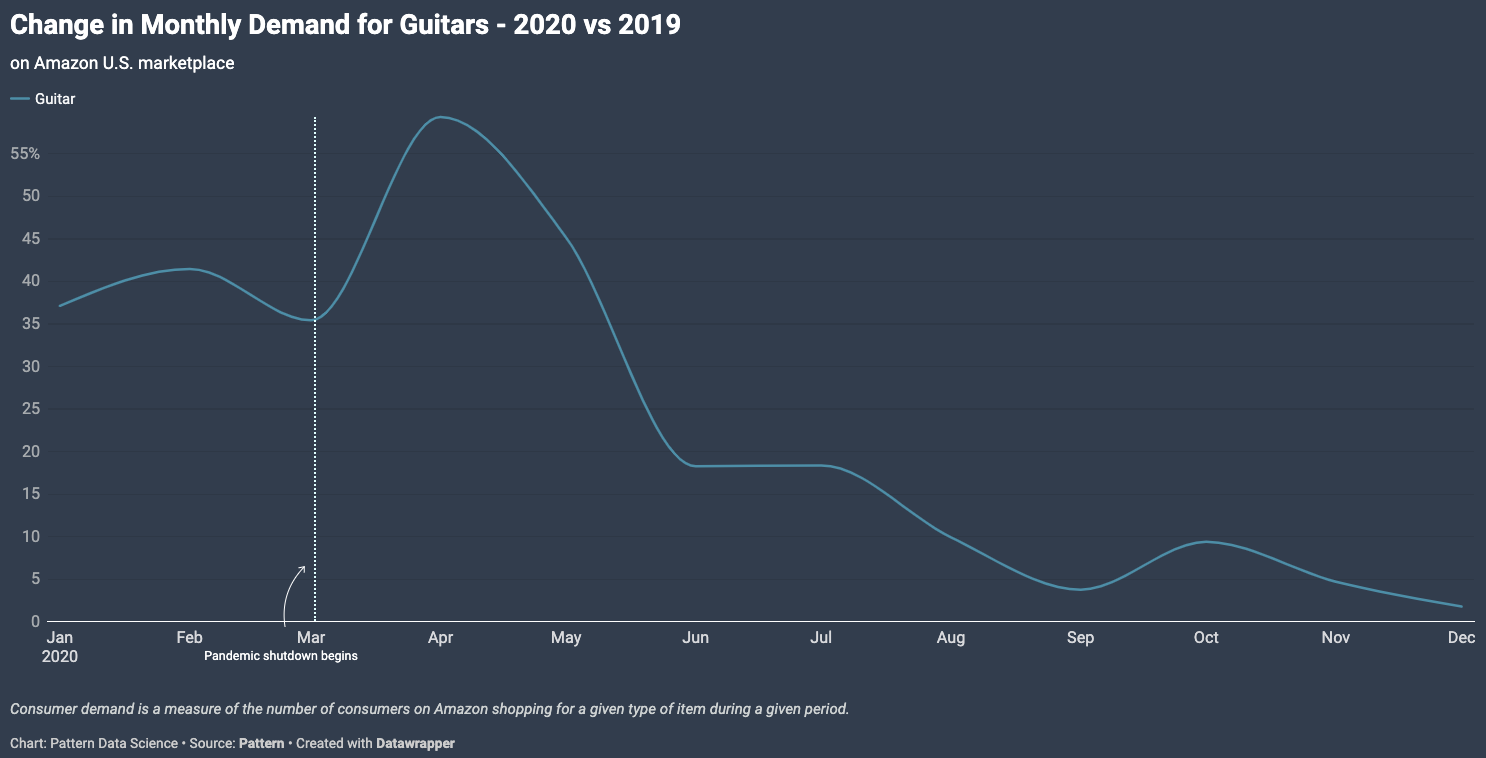 The chart shows that there was a clear impact in the early weeks of the pandemic, but to even better understand the overall impact of COVID-19 it is necessary to compare 2020 to the previous year: Monthly demand for guitars started the year high, with demand in January 2020 37 percent higher than January of 2019. And it’s here where you can see even clearer evidence that many Americans decided early quarantine was a perfect time to learn to play the guitar. Demand stayed higher than in 2019 throughout the entire year, though the boost clearly waned as the year went on, with December’s demand only outpacing December 2019 by 2 percent.

How did COVID-19 impact market demand for musical instruments?

After seeing how COVID-19 impacted the instrument with the highest demand, Pattern next wanted to see if other instruments experienced similar trends. First, it took demand for the months of March and April 2020 and compared them to the same months in 2019 to see which instruments got the biggest “quarantine bumps.” According to Pattern analysis, the ukulele was by far the most popular early quarantine musical instrument. Demand in March and April last year was 66 percent higher than in 2019. “A cheap, fun, and comparatively simple instrument, its pandemic popularity is no surprise,” stated Pattern.

The guitar got the next largest boost, followed by the piano, and then far more surprisingly, the harp got the fourth largest early-pandemic boost. Not all instruments in its analysis had a better March and April in 2020 than in 2019, though. Trombones and violas both saw demand drop by 27 percent in those months. Trumpets and saxophones also saw demand dip in that timeframe. But, as it saw in the monthly year-over-year chart for guitars, the early-pandemic bump only tells part of the story. So, Pattern next compared total demand for all of 2020 to total demand for all of 2019 to determine the longer-term impact of COVID-19 on each instrument.

Most of the instruments in Pattern’s analysis experienced an early-pandemic bump, but others experienced a decline. Guitars, pianos (and keyboards), ukuleles, harps, and drums all experienced more demand in 2020 than in 2019, but the rest of the instruments in Pattern’s analysis saw demand fall last year. A possible explanation is that instruments well-suited for self-teaching at home did well in 2020, but those more associated with traditional in-school learning environments (like high-school band class, etc.) suffered long-term, stated Pattern.

For an even clearer picture, let’s take a look at the monthly year-over-year comparison for some of the most impacted instruments. First, here are the instruments who saw the biggest increase in demand: Each instrument started the year strong before seeing demand surge in April. Demand for pianos and guitars remained slightly above 2019’s through the end of the year, while drum and ukulele demand settled to just under 2019. Here’s how 2020 looked for the instruments that experienced the biggest decreases in demand: 2020 started strong for these instruments as well, but their demand plummeted in April and never really recovered. The lack of an early pandemic bump makes sense as someone’s far more likely to decide to teach themself how to play the guitar while on lockdown than they would the trombone. The lack of any recovery and the dip in August during the back-to-school shopping season, meanwhile, lends further evidence to our theory that distance learning has had a severe impact on demand for specialized musical instruments.

How did COVID-19 impact market demand for musical accessories?

To close out its analysis, Pattern examined data for musical accessories. Here’s what it found: Strings and tuning supplies both experienced a modest increase in demand in the early days of the pandemic shutdown, but both pale in comparison to the run on rosin. Demand for rosin shot up by 79 percent in April 2020 compared to April 2019 and increased even higher to a 91 percent increase in May. It appears that string musicians felt adequately stocked up by the summer, though, as demand fell to normal levels for the rest of the year. Drumsticks, meanwhile, saw demand fall from above 2019 levels early in the pandemic and never recovered. 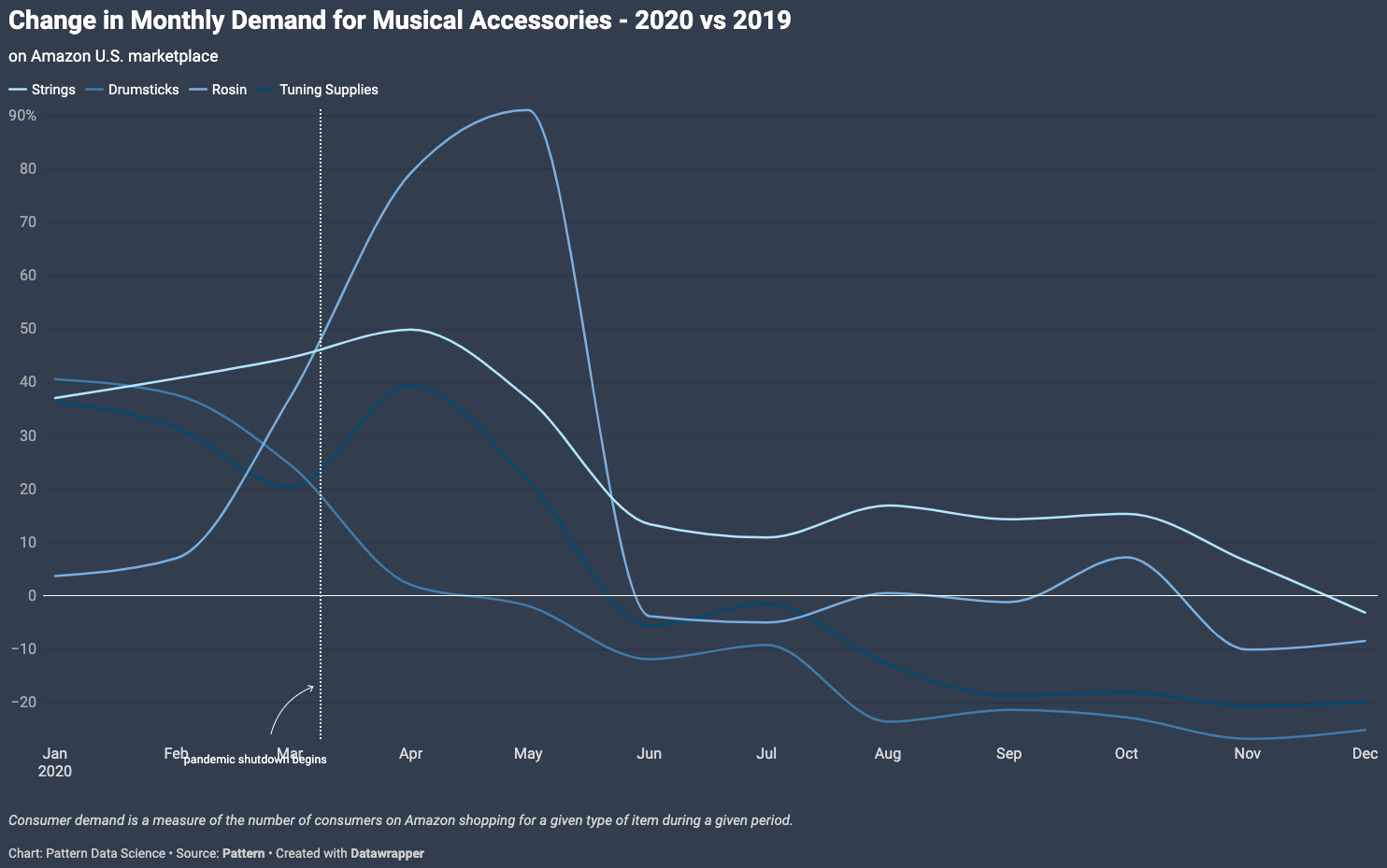 A lesson for brands