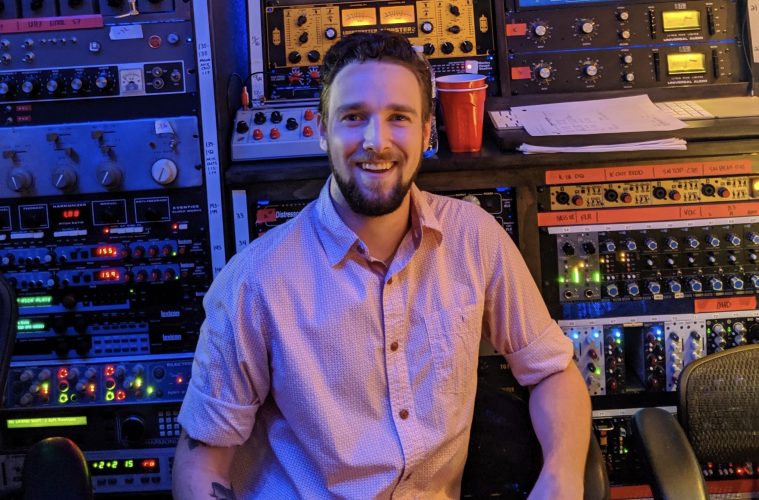 Ricky Mannion: I really look up to Rupert Neve. I admire his dedication to doing things the right way and not cutting any corners. The amount of proper planning and development that he’s always done is reflected in the quality and timelessness of his designs. I think Rupert designed the 1073 when he was in his 40s, so I suppose I’ve got about 20 years to put something decent together!

Mannion: My Opa always says “Nichts von nichts,” which means “Nothing from nothing.” You’ve got to put in the legwork to do anything cool. If you try and skip steps and go too quickly, whatever you’re trying to build won’t have the proper foundation.

Mannion: When I was very little, I started taking piano lessons. I think that formed the basis of how I understand music. I felt that I could express things through a piano which I couldn’t say with words.

Mannion: For roughly the last seven years, my favorite instrument to play has been the bass guitar. There’s something so soothing to me about the warm tone of a bass and the way it can just tie a song together. I’m always picking up my bass when I have a moment just to noodle around a bit and listen for the tones and harmonics.

Mannion: I’m part musician and part scientist. Besides being a designer and consumer of musical equipment, I’m an engineer in the aerospace industry. Since I dove into small-satellite research during my time as an undergraduate at the University of Illinois, I’ve loved being on the cutting edge of technological development. I love to work on open-ended problems because they allow me to develop creative solutions. I think the intersection of music and technology is profound, and we’ve only scratched the surface of the types of high-tech music gear that will come next.

Mannion: When I’m not working or practicing, I play video games. Of course, as a 22-year-old, though, my main priority is spending time with friends. I worry that we’re all growing apart a little bit at a time, and it’s critical that we make a conscious effort to stay connected. You can achieve a lot by hiding away to work on music by yourself, but I think you’ll find that playing together with other people is more rewarding.

Mannion: The first concert I ever went to was Paul McCartney at Wrigley Field in Chicago when I was about 14. My friend John and I were waving our arms around like lunatics right near the stage during the quiet part of “Let It Be,” and Paul just gave us this look. I think I peaked.

Mannion: I’m torn here. If I could’ve seen Pink Floyd playing together, I think I would’ve died. I vividly remember the first time I sat down and listened to “Dark Side of the Moon” all the way through. It totally changed my perspective on what music is and what’s possible through music. On the other hand, I was introduced to a lot of great music through my mom’s taste, and she’s always been a huge Bowie fan. We’ve got that in common, and I think it would have been so cool if we had been able to go see Bowie together.

Mannion: There’s a few on my list that I’m ashamed I still haven’t caught. My list of folks who need to come through the midwest so I can see them includes Rammstein, FIDLAR, Julien Baker and Anderson .Paak.

Mannion: As a little kid, my parents would put on “Rebel Rebel” by David Bowie, and I would jump around on the couch with this inflatable air guitar, just rocking out. There’s some home footage of that, and I think it’s hilarious. When I hear that song, it always makes me think of my home and being a kid.

Mannion: My classics are “Immigrant Song” (Led Zeppelin), “Dani California” (Red Hot Chili Peppers), “Ballroom Blitz” (Sweet), “We Will Fall Together” (Streetlight Manifesto), “Cheap Beer” (FIDLAR), “Elizabeth” (Ghost), “Moya” (Godspeed You! Black Emperor) …there’s so many! I’ve literally always got my monitors in my ears listening to something. Lately, I’ve been on an odd 2 Chainz/Behemoth kick.

Mannion: I got to play with a Rupert Neve Designs 5088 console. I swear I died and went to heaven. I came over to the booth just gushing about what a big fan I was. I told all of my friends as soon as I got home.

Mannion: Flea from the Red Hot Chili Peppers, Rupert Neve and David Bowie. I’d like to ask them about who they are as people. When you listen to someone’s music, you sort of get the feeling that you know them, when in reality it’s just a very one-dimensional, shallow image of a person. I’d like to know how they felt about their lives and what motivated them to be who they are.

Mannion: I traveled to New York City with our high school band once to play some concerts, and while we were there, we had some time to wander about Times Square. I convinced my friends to come with me to a shop, which had a whole floor of beautiful basses. I was sitting, playing for my friends and gawking at an unbelievable Jens Ritter bass. All of a sudden, someone from the store came over and asked if I’d like to play it. There I was: a high school kid sitting in a boutique bass shop in Manhattan with my friends, playing a bass that was worth more than I was.

Mannion: The best aspect of the MI industry is its ability to bring people together. Not only are there so many incredible people working professionally in MI, but the instruments provided by the hard work of those people are what unite musicians and friends around the world.

Mannion: I admire our astronauts. I have a profound respect for scientists like our astronauts who dedicate their lives to pursuing that goal and pushing the boundaries of our understanding of the universe.

Mannion: I think machine learning and neural networks will continue to play a greater and greater role in the development and usage of music gear. As we are able to solve more and more complex problems by applying machine learning to them, we’ll be able to focus even more on being creative.

Mannion: I’m not originally from Champaign, Ill., but that was my home for the past several years while I studied at the University of Illinois. There’s something about Champaign — the way things quiet down during the summer and life seems to take a pause. I find myself returning there often.

Mannion: My most prized possession is definitely my Modulus Flea bass. It’s a ’98 model, so it’s got an original Lane Poor pickup in it, and the neck is so playable because there’s no truss rod. Plus, it’s finished in a solid red, which I haven’t seen on any other Flea bass from this era, so I think it may have been colored to order. Every time I see it, I am happy.

Mannion: Right now, I’m working on Trevor Noah’s “Born a Crime,” which details his life growing up in apartheid South Africa. Trevor’s life story is truly amazing, and he inspires me to be a better person.