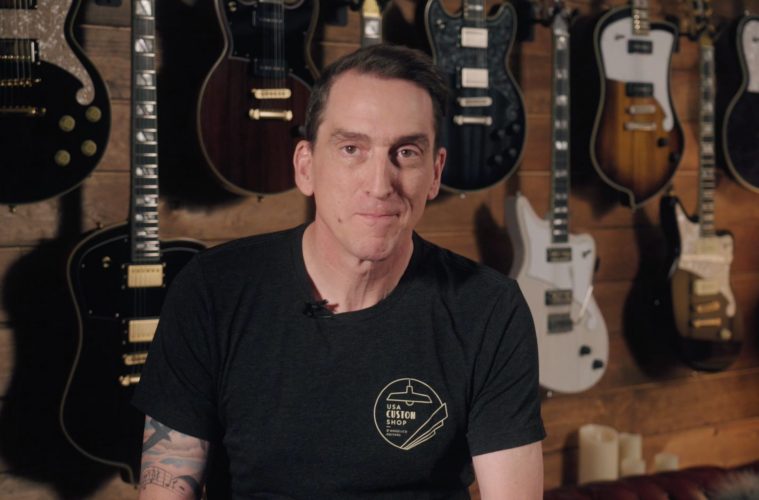 D’Angelico Guitars’ Jimmy Lovinggood has plenty of great MI memories, including when Aerosmith’s Steven Tyler walked into the company’s booth at The NAMM Show looking for cheeseburgers.

Jimmy Lovinggood: My former CEO Lacy Edwards. He taught me so much about business and life. He was an example of how to treat people with respect, kindness and honesty. One valuable lesson I learned from him was how to motivate people. That a method of motivation that works for one person does not necessarily work for another. A good manager needs to know what motivates each of their co-workers and proceed accordingly.

Lovinggood: Never tell someone to hit you first.

Lovinggood: My grandfather bought me my first guitar when I was about eight or nine years old. I wasn’t the best [at playing it], so I gave it to my friend and now brother-inlaw Gene Baker. Then I started playing bass.

Lovinggood: Bass guitar; though I’m slowly adding to the number of songs I can play on guitar, as well.

Lovinggood: When I was 17, I sold Kirby vacuums door-to-door. I was really bad. I think I sold one: to my mother.

Lovinggood: I’ve been to hundreds of concerts, so this is a really tough question. If I had to choose one it would be Iron Maiden, “Number of the Beast” tour.

Lovinggood: The Beatles, because they’re responsible for some of the best rock and roll songs ever written.

Lovinggood: Led Zeppelin, “Houses of the Holy.” My friends and I would listen to the entire “Physical Graffiti” album over and over again. But that song just reminds me of being a teenager and hanging with great friends.

Lovinggood: “Lions in Cages” by Rae Garvey, “Let it Be” by The Beatles and “The Funky Nation” by Jordan John.

Lovinggood: It was the first year D’Angelico Guitars had a room upstairs. At the time, the room was shared with my former company, Premier Builders Guild. On day two of the show, Steven Tyler walked in. Being a huge Aerosmith fan, I became very excited. He looked around and realized our room was not where he could get cheeseburgers, so he left. That was most definitely one of the funniest moments I’ve had at The NAMM Show.

Lovinggood: Elvis Presley: How did he handle all the negativity from the moral majority when he first broke into the business? John F. Kennedy: I would ask him to explain the entire Cuban Missile Crisis. And were there really aliens at Area 51? My mother: No questions. Just one last dinner to talk and be together.

Lovinggood: This is an easy one. I was visiting a dealer (also a friend) in the Chicago area. We walked out of a restaurant/bar. I proceeded to trip on the curb and needed 27 stitches on my face to repair the damage. I won’t soon forget that one.

Lovinggood: The people. I know that sounds like a standard and safe answer, but it is true. I have met so many great people in this industry. Many are now lifelong friends.

Lovinggood: My big brother Bob. Growing up without a father wasn’t easy. He taught me how to be a man and a good human.

Lovinggood: That is a difficult question. I have been doing this for so long it is hard to imagine myself doing anything else. I think something in manufacturing. That is what I know and what I enjoy. Bringing great products to consumers is something I truly embrace.

Lovinggood: My hometown is Southgate, Mich., which is about 10 miles south of Detroit. It is a small town with a big-city feel since we were so close to Detroit. Like all of the metro Detroit area, Southgate is filled with sports nuts. Everyone loves the Red Wings, Lions, Pistons and Tigers. I believe it is a law to own a jersey from each team or you get kicked out and forced to move to Ohio. The weather was just a bit too much for me. I moved many years ago to Los Angeles. I prefer one season all year around … warm.

Lovinggood: The American flag from my grandfather’s funeral. He was a WWII veteran, and I was chosen to receive the flag.

Lovinggood: I am not an avid reader. However, I do enjoy a good murder mystery. My favorite book would have to be “Along Came a Spider” by James Patterson. Really any of the Alex Cross books are among my favorites.

To learn more about D’Angelico Guitars, visit the company’s website.