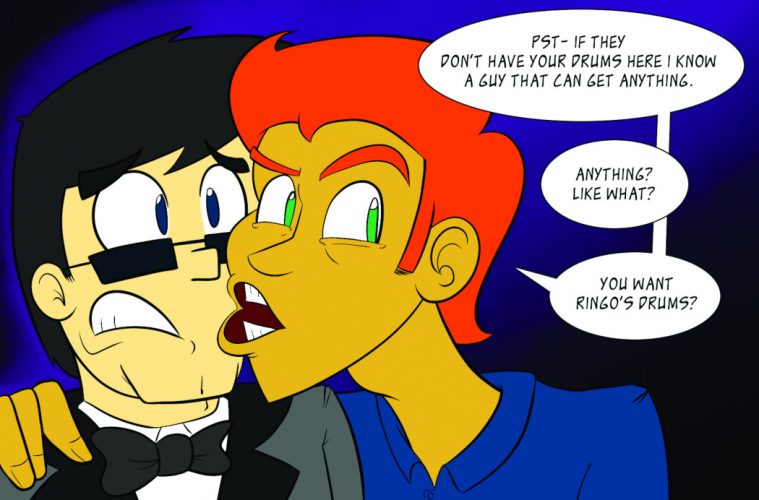 On the Beat In the Windy City

Spies love the big cities. How can you not? There are plenty of things to “spy” on, lots of bars that serve martinis and, of course, many women. So, when Q recommended I head to Chicago, I rushed to the airport. In fact, I was so excited to visit “The Windy City,” I think I was at the airport in about five minutes.

Picking up on last month’s theme of drums and percussion, I decided to check out a drum kit. I am on a hunt for a drum set that would serve a 20-something-year-old. I’m not looking for anything too fancy; just something for a young pro to grow into.

Kagan & Gaines Music is a decent-sized music store meant to serve the educational needs of its area. The store has a more basic range of instruments, but it is fairly comprehensive and has agreements with most of the major manufacturers. The repair department, which I discussed with a very nice young man who helped me at the store, was primarily geared to be helpful for all sorts of fretted instrument players and band and orchestra musicians.

When I walked in the door, help was instantaneous and courteous. On the floor was a Yamaha Tour Custom Maple 4-Piece Shell Pack with 20-inch bass drum at $1,300. The salesperson suggested I try it out. The Yamaha was of good quality. It was responsive and looked good.

While the offerings on the floor at Kagan and Gaines couldn’t match the mega-store model, the store’s willingness to acquire any product I wanted was expressed several times. If there was anything I’d seen elsewhere that I liked, the store would order it in at a comparable price. Also, it has a loudly expressed policy of “take it home and play it.” If I didn’t like it, I could bring it back. For your normal local musician, this deal can make life easier, of course. A store with a willingness to help you get what you need is worth a lot. The store also offers private and group lessons, so it thoroughly covered many aspects of things, plus they will service your professional needs if you know what you want.

My next stop was at Sam Ash Music in the outer suburb of Lombard. In an effort to keep the feeling of community alive, the Lombard city council is surprisingly active in a variety of events geared toward involving the citizenry in the community during the summer. “Lombard’s Cruise Nights and Summer Concert Series” was going strong this year. This is a longstanding summer project in its 20th year. The summer lineup featured 10 live music concerts on Saturday nights in downtown Lombard. Residents and visitors experienced live music, viewed the large collection of classic and custom cars, and enjoyed evenings in downtown Lombard’s stores, restaurants and parks. These are well attended, and the musical offerings from local artists helped to foster a great ambience.

The Sam Ash salesperson was very knowledgeable and friendly at the drum department. After thoroughly questioning me to determine what I needed, he steered me toward a DW maple set that was on the floor. He said this would give a young pro the professional warmth they were hunting for. It was a nice kit that had just come in secondhand and would set me back about $1,400. It was a Performance Series 5 piece and usually cost about $2,400, according to the store. Sam Ash will price match on any gear, and they can order anything your heart desires. When I asked the salesperson for details on how quality is determined for kits, he explained that there was a variety of yardsticks to measure desirability of particular drum sets. “A specific kit can become popular if it becomes the signature kit for a particular drummer, and that can then bump up the price,” he said.

He also explained that a mix between a machine-made kit and a handmade kit is the sort of price range a young drummer would be stepping up to.

Sitting in a rapidly growing area of town is Vic’s Drums. The West Loop is a community that is experiencing great development because of its proximity to downtown Chicago and a number of major entertainment venues, like the United Center. The area is saturated with redeveloped industrial spaces, both commercial and residential.

As I approached the front door, I was met by helpful assistants almost instantly. Asking about Vic’s resulted in me getting a thorough primer on the various gear that they have available and the services they offer. Everyone working there is a professional drummer, so they know the intricacies of the instruments thoroughly.

Reasonable prices for rehearsal spaces and lessons make this a pretty popular venue with a lot of local groups, and the attached recording spaces make Vic’s a great place to get a huge variety of musical things done. There are also teaching spaces available.

I informed the salesperson that I was looking for a drum set that fit my criteria of a new rig. After discussing my situation thoroughly, he felt my needs were going to be in the $1,500-$2,000 range. For my purposes, Vic’s had a wide selection of drums to play with.

For those who salivate over the delights of vintage gear, Vic’s maintains an enormous selection of choice goods that has quite a reputation. Its other claim to fame is the giant number of choices it offers in all sorts of instruments, including congas, bongos, triangles, and even add-ons like mallets and other goodies a drummer craves.

When I popped in, there were a number of toys to play with on the floor. The first item I was drawn to was a Pearl Session Studio Select Series 5-Piece Shell Pack. You could instantly hear a nice set of harmonics that would be excellent in a studio or a larger venue. The fact that there was a free added floor tom was some nice icing on the cake, and while I tried several sets on the floor and liked them all, I felt that the birch and African mahogany seemed to guarantee good stage resonance. At $1,500 for this set, it seemed a good choice for the upgrade I was hunting for.

Vic’s also offers service for drums and cymbals. Not only that, but the prices for cleaning, hourly bench fees and specialties like cymbal edge crack repair were all readily available on its website and in discussion with the assistants. The possible future needs of a young drummer were brought to my attention, and all sorts of maintenance costs were easily figured into the overall long-term costs for her possible career path.

Wandering into Guitar Center on Halsted Street, I wound up playing with the electronic drum sets first because they were taking up the space near the front of the drum room. Do I sense a possible marketing ploy here?

There certainly seems to be quite a public relations push for more acceptance of digital drum kits. I found that the new Alesis Strike Pro Kit Red Sparkle at $2,300 is a mid-range digital set that has wood shells and mesh in a mix with the intention of giving you the best of both worlds. Since they are standard sizes, the drums are instantly comfortable for the musician. Playing with these drums was fun. Also near the front of the drum room was the new Roland TD-17KVX V Drums Electronic Drum Set for $1,600. The reviews from other drummers generally revealed that both of the above kits are a good buy and a solid alternative for drummers playing smaller rooms.

As for the sales staff, an assistant manager greeted me and was very helpful and knowledgeable. He suggested I have a look at one of his favorites: the Pearl Master’s Shell Pack line, namely the Pearl Masters BCX924XP Birch 4-Piece Shell Pack with 22-inch Bass Drum. It costs $1,599, and he told me he prefers the birch line rather than the maple, as his contention is that the overtones ring deeper with birch and that its natural EQ is excellent. But, generally speaking, he explained that the infrastructure of Pearl kits allows for more resonance because of their Optimount System. I was told that the system is a way of attaching the tom’s tension rods and floats onto rubber cushions. The mounting hardware is completely removed from the drum shell, so you get full resonance when you play.

As expected, I discovered that Chicago has an excellent group of retailers when it comes to drum kits. I was twice steered toward the Pearl line of instruments by completely different salespeople.

Three of my music store options had dedicated drum professionals on staff who were savvy about drums, so they were all well situated for this comparison. The only negative for Kagan & Gaines Music is that it didn’t have the specific advice a young pro needed, as it’s more student-based, but I will add this is not the store’s fault — just an observation for this particular story.

Sam Ash and Guitar Center both had excellent choices available on the floor and definitely had people who had a wealth of useful information about my specific needs on this trip. Either store would be a good choice depending on your other criteria.

The sale this time goes to Vic’s, though. The precise data and guidance a professional could get there was naturally the best for my needs. The availability and transparency of the repair and maintenance issues, the breadth of merchandise and the store’s other efforts to support drummers in getting better at their craft all give the sale to Vic’s.

I will admit, however, that Vic’s was the only specialty percussion store, so perhaps it had an advantage.