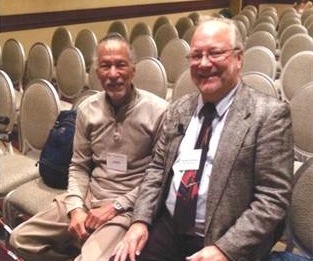 “If I had a screwdriver and a pair of pliers, anything that could be opened was in danger,” admitted Dr. James West about his curiosity as a child growing up in Prince Edward County in the 1930s and 40s. “I had this need to know what was inside.”

Shure is recognizing West’s achievements in microphone technology following his 90th birthday. According to Shure Historian, Michael Pettersen, “The majority of Shure’s condenser microphones offered since 1975 are electret types and directly linked to the groundbreaking work of Dr. West. The miniature mics employed in theater, broadcasting, and live music are feasible because of his innovations.”

West enrolled at Temple University in 1953. He studied physics and did summer intern work at Bell Labs in Murray Hill, N.J., in the Acoustics Research Division. Upon graduation in 1957, he was hired by Bell Labs.

In 1960, West worked with Bell Labs colleague Gerhard Sessler to develop a sensitive, miniature microphone element. In 1962, they completed the development on the electret condenser microphone. Six years later, it was in mass production. In 2021, electret mics are ubiquitous, having been used in mobile phones, computers, hearing aids and, as mentioned, pro-audio products.

West was the president of the Acoustical Society of America in 1997. He joined the National Academy of Engineering in 1998 and was inducted into the National Inventors Hall of Fame in 1999.

West retired from Bell Labs in 2001, then was named a full professor of Electrical, Computer and Mechanical Engineering at Johns Hopkins University. He became Dr. West in 2013 when he was awarded an honorary doctorate by the University of Pennsylvania.

During his long career, Dr. West has created initiatives to convince people of color and women to pursue careers in science, technology, engineering and math. West co-founded the Association of Black Laboratory Employees (ABLE), an organization formed to address placement and promotional concerns of Bell Labs’ black employees.

He was instrumental in the creation and development of the Corporate Research Fellowship Program (CRFP) for graduate students pursuing terminal degrees in the sciences, as well as the Summer Research Program, which together provided opportunities for over 500 non-white graduate students. He has also served on the Board of Directors of the Ingenuity Project, a Baltimore non-profit that supports talented middle and high school students in science and math.

He has received numerous accolades for his development of more than 250 patents for transducers and related discoveries involving polymer-foil electrets.