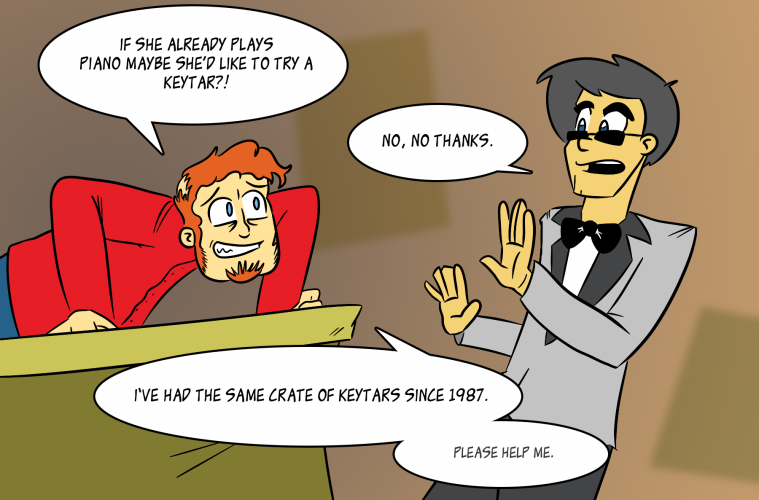 Seeking Gems in the Emerald City

I’ve traveled to a good mix of locations this year, visiting San Francisco, San Diego and Albuquerque in the west, Austin, Minneapolis and Dallas in the Midwest, and New York City, Philadelphia, the Jersey Shore and Harrisburg, Pa., in the east. Surprisingly, I haven’t ventured to the west since July, so I knew it was time. So, to close out 2017, my travels took me to the Pacific Northwest, searching for acoustic guitars.

Strong coffee and bad weather are two of the big reasons that Seattle has a reputation for being a hub of musical creativity, and, as such, there is a good amount of music stores that cater to both beginners and pros alike. From the early days of jazz in Pioneer Square and the underground speakeasies to the psychedelic thunder coming from Jimi Hendrix and his Stratocaster, Seattle has been inspiring artists for generations. While trends rise and fall, the musical community has always remained a present and defining feature of this city and is very much a source of civic pride. You can’t go more than a block or two in this town without running into a club or some other landmark that’s tied to the industry.

The MI Spy should never risk being tied down by a significant other. That’s why I usually choose to ride solo: no liabilities. But, on this trip, I decided to bend the rules and take along a beautiful woman. I will call her my “girlfriend” because what else would I call her? Anyway, my girlfriend is important for this mission, since she’s been wanting to learn how to play Spanish guitar for a while. We traveled to four stores, spending about 30 minutes in each place.

For the record, she’s a proficient piano player who has played music since she was seven and has a better ear than I do, and I’ve played guitar for almost 20 years. While I’m far from talented, I know what a warped neck looks like and I know that sometimes the pretty guitars sound horrible. I also know when someone is being shady or trying to scam me. The customer service at three of the places was excellent. The people seemed more interested in seeing my girlfriend get into playing than they were in just making a sale, and it’s clear that most of the people working in the shops in Seattle truly love music and want to share that passion with others.

Located just a few blocks north of the U-district, this place has been supplying Seattle musicians for years with top-quality gear and great service. Tucked just off of the main drag, it’s easy to get to from the city and well worth the 20-minute drive from downtown. A throwback to the ’80s, you can’t miss the giant spinning guitar-head sign that’s been around for so long that it’s become a Seattle landmark on its own.

This is a small, indie shop with a nice mix of both new and used guitars, as well as some other odd vintage gear that you won’t find at other shops. Despite being fairly large, it also feels slightly cramped since it has a lot of stuff to choose from. Customer service was a friendly “hello” and wave from two of the guys behind the counter, one of whom asked if we needed help. Once we told him what we were looking for, he showed us the acoustic section, gave my girlfriend and I a few options, and encouraged her to pick them up. He seemed to be genuinely stoked to get her into playing music, but wasn’t pushy, and after a minute he told us to look around and that he would be in the next room if we needed anything. With the selection they had, we found two guitars that we really liked. We felt like we could have sat in the shop and played all day without anyone giving us strange looks. This is a musicians’ music store at its best.

By far the biggest of the four places we visited, this is where you can go for things like picks or extra strings, if you don’t have time to run up north. I know it carries what I need, and this Guitar Center is open most nights until 9 p.m. and located just south of Lake Union in Downtown.

The salesgirl came up to us quickly and not only showed us where the guitars were, she showed my girlfriend some of the pros and cons of various models and neck sizes. She was well informed, yet didn’t make my girlfriend feel stupid for asking what a “cutaway” meant and why she would want a guitar with one. The customer service was tremendous overall.

Unfortunately, we visited American Music on a day that the store associates were not in the mood to speak with or deal with customers. We walked in, and no one said “hello,” so we looked at a few acoustics in the main showroom before finding the acoustics on our own. While American Music had a nice selection, there was no one around to help us at all in the 15 minutes we sat in there playing various instruments. Finally, we came to the conclusion that it just wasn’t a good day and left without saying a word. For a small place that is normally staffed with friendly and enthusiastic people, based on prior visits I had, this was a major letdown. It may have been only a bad day, however.

I have only been in Dusty Strings once before. This place does not sell cheap instruments. That does not mean that it doesn’t sell affordable guitars, it means that if it sells an instrument, it’s going to be top of the line. That’s not to say it’s a bad thing. High-end product has made a comeback along with the economy, and many NAMM Show speakers have alluded to aiming to sell low-end products or high-end products, with nothing in between.

Located just north of the Fremont Bridge and in a basement, you could easily walk right by Dusty Strings and not notice it. Once you go down the stairs, you get the vibe that you are walking into someplace special. Opening the door strums a guitar hanging above you that lets the staff know they have guests, as well as letting you know that you are very much in a boutique music store. Signs are posted that ask that you please take off your jacket before playing the instruments, since most of them cost more than I make in a month and are, for all intents and purposes, functional works of art. Customer service was top notch, and the salesperson was very easy going and approachable without any pretentiousness. After he showed my girlfriend a few options for a Spanish guitar, he took the time to sell me on one of the new plastic ukuleles that they carry, and it sounded as good as promised. This is not where you go if you think that maybe you might want to sorta kinda learn how to play guitar; this is where you go to make an investment into a top-of-the-line instrument that will sound amazing for a few generations.

If you live in Seattle, you have a lot of options depending on what you are looking for and your price range, and there are many other stores that are worth the time to check out. Each place that my girlfriend and I checked out had its pros and cons, and it’s really a matter of what you’re into.

Guitar Center had a great selection of the Spanish-style guitars that we wanted, in our price range and with a variety of options, such as neck sizes and pickups. Also, the salesgirl wasn’t pushy and really took the time to ask my girlfriend a lot of questions, so that she could help her find a great guitar.

American Music knew we were in the store and not a single person took the time to check on us or say “welcome.” We were in there for a good 20 minutes and, even though it is a large store with a decent selection of both new and used gear, the lack of customer service bugged me.

Dusty Strings was by far the nicest store we visited and also had great customer service. The staff was warm and, while it doesn’t have as much in terms of selection compared to the other stores I visited, everything in the store is top of the line.

It was close. We had a good experience overall in three of the four stores. If I had to take my pick, I would have to say that The Trading Musician would be my first choice. The store might be a bit crowded, but it has a great selection of both new and used gear with the kind of service that encourages people to play instead of intimidating them. Even though it’s a smaller store, you will want to plan on spending at least an hour in there looking at and trying instruments and talking with the staff. Chances are that you will walk out with a great guitar at a fair price, along with some helpful advice from a friendly saleseperson.

Happy holidays. I’ll see you in 2018 for The NAMM Show issue in January. M, my boss, has already determined I will travel to Music City, Nashville, Tenn.