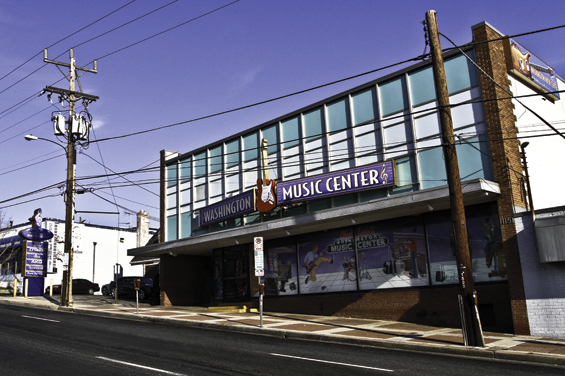 Out Of The Ashes

In 1958, Chuck Levin’s mother owned a pawn shop in Washington D.C. Eventually, Chuck evolved it into a music store down the street. All went well until 1968, when they were burned out by riots. Out of the ashes, the family decided to move the music store to Wheaton, about 30 minutes from their location in Washington D.C. Eventually, Chuck’s two sons and daughter, Alan, Paul and Abbe, carried on the store. Now, with Paul’s son, Adam, there are four generations of experience. This family clearly knows what to do.

Chuck Levin’s Washington Music Center (WMC), colloquially known as Chuck’s, is a full line-plus store. As Chuck’s son, Alan, said, “We do everything!” In fact, it’s easier to list what the store doesn’t do. It does not sell acoustic pianos, or lessons. It does sell a full line of band products, orchestra products, recording equipment, sound equipment and music software, as well as acoustics, electric guitars, electric basses, amps and other fretted instruments. Its Web site is amazing. You click a button and everything is in Spanish. “Everything we do, we do pretty well,” Levin stated. “We are still a mom-and-pop store, even though there is no longer mom and pop,” he explained. Paul is usually on the floor and knows who the customers are. The manufacturer’s warranty is one thing, “but, what is right is right,” Levin added. “It really is that old-time music store. If you want to say it’s micro-managed, then it is. We want to know what is going on.”

WMC stands behind its instruments with a repair or replacement for the customers, and then returns an item to the manufacturer. The repair shops have been there since the beginning. Some 18 to 20 technicians service the store’s 10,000 rentals. It has its own guitar, horn and orchestra shops. It recruits new techs from the technical schools. Some techs, in fact, have been there for 20 years. The newest person has been there for six. When salesmen have been someplace for 30 years, it just does not compare to other stores, where six weeks might be closer to the average turn-around time for salespeople.

Asked about the kinds of activities that WMC initiates to build strong community connections and earn the loyalty of people in its town, Levin had a ready answer. “We work with schools, universities, and community festivals and events through financial sponsorships, donations or equipment,” he remarked. “If it is a Battle of the Bands, we donate prizes.” Asked about how the store has evolved over time, Levin answered, “We started as full line and have maintained it. We have expanded the different departments and have evolved. We are now including software in the recording department.”

Levin was asked how he feels about Best Buy and Target selling instruments. Has it impacted business? He responded, “I don’t think they are doing a service to our industry. It is not like stacking paper. People want to touch it. They want to ask questions. We want you to leave with what will fit you. We don’t want them just to buy it, keep it for 30 days, return it and then try something else.” He elaborated, “We want to have a conversation. What kind of music are you learning? What do you plan to do with it? Are you playing jazz? Are you playing concert?” He added, “Let’s get the fit right from the beginning. We try to get them to come down and try it. We aren’t going to make every sale. But, if a customer has bought something online from a competitor and now wants us to explain everything about it, we will charge a fee sometimes and educate them.”

Levin had been on the advisory board for NAMM years ago and has participated with Sesame Street Musicworks. The store has also participated in fly-ins and music education. Levin has been to the NAMM show since he was 13 years old, and has only missed one show in almost 50 years. Typically, about eight staff members go out to the Winter NAMM show.

Chuck’s continues to improve and inspire loyalty, both from customers and from manufacturers. Levin remembers the loyalty of years ago. As noted, the store was leveled in the 1968 race riots in Washington D.C. After the assassination of Martin Luther King, Jr., many community members felt stores should have closed as a sign of respect. This prompted bricks being thrown through store windows and stores being burned. Eventually, rioting and looting happened across 110 cities throughout the nation. After WMC was leveled, Levin remembers his father getting calls from Mr. Martin at Martin Guitars. Martin told their rep, “You give them anything they need. If they need anything to get opened, you get them anything they need.” Levin affirmed that “nobody lost any money from us,” adding, “Our credit was stellar and still is.” That is something the new generation was told by their father: “This store has your name on it.” WMC also shows its support to other stores if they are in need of something.

A hilarious story with which Levin ended was about a customer who admittedly had no knowledge of musical instruments but, nevertheless, wanted to buy a trombone for his child. After purchasing it, the customer wanted a new one in a box. The customer noticed that, when he unzipped the case, the pitch of the zipper was different between the display one and the boxed one. Levin told him, of course, that it didn’t matter. It bothered the customer so much that he insisted on having Levin order him another one from the factory.

Of course, Levin took the opportunity to send the manufacturer’s Head of Production a note complaining about the low standards and inconsistency in their zipper pitch. The Head of Production called him and said, “I know this has to be a joke…but, at the same time, I know some customer actually must have complained.” It’s a great story, and it’s also a great store.