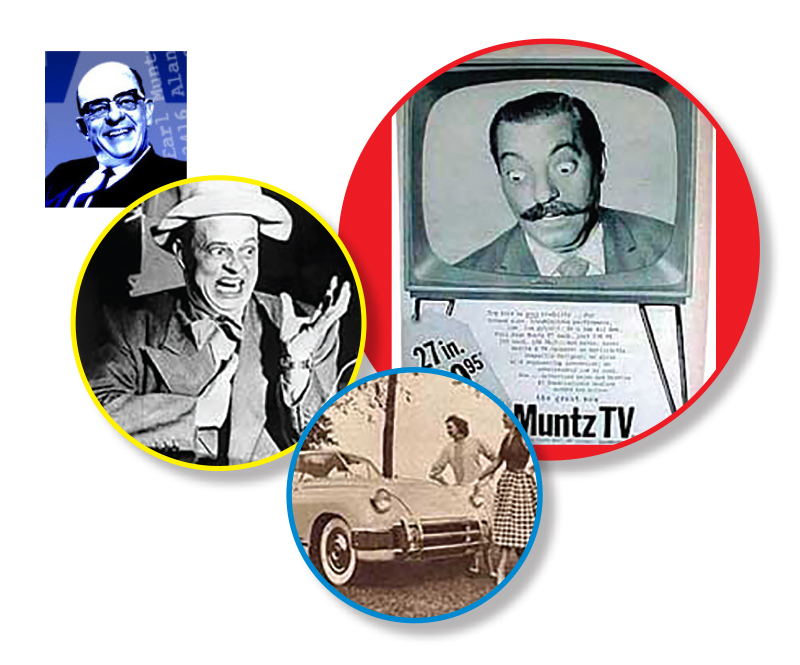 The Most Interesting Person I Ever Met

I’ve met hundreds of rock stars and country stars, but the most interesting person I ever met was not a musician; he was a master marketeer. His name was Earl “Madman” Muntz.

I learned that he was developing a six-foot projection television and I got the bright idea to buy some for Sunn and offer them to dealers for a $12,000 order.

When the NAMM show was held, I arranged to go to the Muntz factory and talk to Mr. Muntz about my proposition. It was in Van Nuys CA. I met him and made my presentation to purchase the televisions. He was in production and he agreed. Ironically, while I was there, I met Mickey Jones, Kenny Rogers’ drummer, who was there buying a television. He told me he was changing careers and was going to become an actor. He definitely did, because I’ve seen him in many television shows. Anyway, upon meeting Mr. Muntz, I felt I was with a marketing genius…and he definitely was. He is in the history books as the inventor of the car stereo. He built Muntz cars and he had many movie stars as his friends.

He took a liking to me. When I told him I was staying in Anaheim, he said, “How are you getting around?” I replied that I was traveling in a rental car. He said, “No, you’re not. I own a dozen cars. Turn that in and you can use one of mine.” He told his assistant to take me to “Burt’s” house and get a car that had been left there. I wondered who “Burt” was and, when we drove through the gates of the estate, I had to ask. “Whose house is this?” I inquired. I was told, “Mr. Lancaster’s house.”

A beautiful woman came to the door and told us Mr. Muntz’s car was in garage number 10. We drove to the garage and I drove out in a limo with lots of electronic gadgets in it. I gave dealers rides in it when I went back to the NAMM show. After the show was over, I drove it back to Mr. Muntz’s house. He said he was going to open a retail store in a new mall, and he asked me if I wanted to go with him. You can bet I said yes!

He was driving a Lincoln he said he’d bought from Dick Clark. As we were driving down some hills, the car started to sputter. It was running out of gas. He said, “Help me rock this thing.” Sure enough, as we rocked it, it started to get gas to the engine. Mr. Muntz said, “Andy Granatelli taught me that trick.” We made it to a gas station.

Mr. Muntz told me that I would see the best demonstration on how to make a deal. He said he would get the first year rent-free; he would start a renters’ association and be its leader; and he would end up being paid to rent there. He did all those things. I never saw anything like it!

He convinced the mall that he would be an asset to it and he’d bring in more customers. He said he would start a renters’ association and he’d be the President. And, he convinced them he should receive some compensation for doing all this, to which they agreed.

Sadly, Mr. Muntz died in 1987. He was truly a giant of industry. He came out with the Muntz car and he was buying them all back. He owned six of them. He started out as a car dealer and had these wild commercials that gave him the nickname “Madman.” But, in my eyes, he was one of the greatest salespeople I’ve ever seen.

You would want anything he was selling because he made you a believer in five minutes. His enthusiasm penetrated you, and you felt good in his presence. I had a great NAMM show that year because I went to the show with his aura around me. And, we were offering the televisions as an incentive to buy more Sunn.

You must have positive people around you every day. Do not tolerate negativity. Negativity is the cause of all failures. Have pride in what you do. Look in the mirror every morning and see a professional salesperson.

Give everything you do 110 percent, no matter how menial the project. I don’t care if it’s polishing up guitars. Polish them ’til they sparkle.

Go to work on time and look forward to having a great day. Smile, and people will smile back at you. You all know the saying: “Laugh, and the world will laugh with you; cry, and you’ll cry alone.”

I feel excited just thinking back to my experience with Mr. Muntz and remembering how good it felt to watch him do what he did so well.

People don’t remember what you did. They remember how they felt when you did it.

So, make everyone around you feel good about working with you, doing business with you and, most important of all, just knowing you.

You will have a great life when you learn to do this.

Have a great fourth quarter. Go for the gusto!

I wish you great selling.