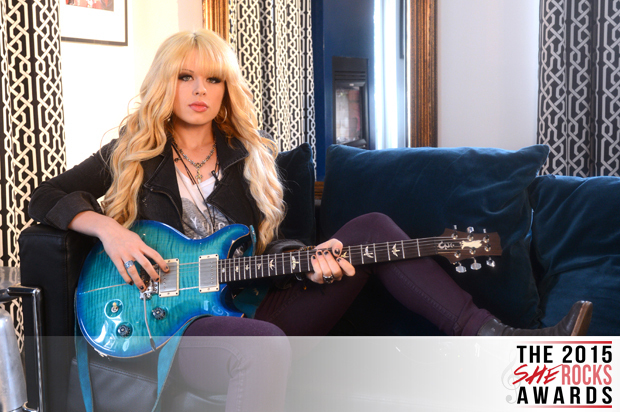 Orianthi To Co-Host The 2015 She Rocks Awards

The Women’s International Music Network (the WiMN) has announced that Orianthi will co-host the 2015 She Rocks Awards. Honoring women who stand out as role models in the music industry, the She Rocks Awards is slated to take place Friday evening, January 23, in Anaheim CA during the NAMM show.

“The She Rocks Awards does so much for women in music, and I’m excited to be a part of it,” stated Orianthi. “This event recognizes women who truly rock, and it will be my honor to be there to congratulate them!” A 2013 She Rocks Awards honoree, Orianthi is a platinum-selling solo artist and known around the world for her masterful guitar playing, having performed with artists such as Michael Jackson, Alice Cooper, Carrie Underwood and others.

Hosting duties will be shared between Orianthi and Laura B. Whitmore, the WiMN’s Founder. “Orianthi is such an amazing role model for female musicians all over the world,” Whitmore commented. “I can’t think of a better partner for leading the She Rocks Awards!”

The She Rocks Awards pays tribute to women who display leadership and stand out within the music industry, and it’s become a standard at the NAMM show. Previous award recipients include female industry leaders such as Orianthi, Sheila E, Gaby Moreno, Malina Moye, Dinah Gretsch, Janie L. Hendrix, Mary Peavey and others. The event brings together industry professionals, music icons, artists, educators, fans and media to celebrate women in music.

The WiMN also recently announced its first honoree for the 2015 award show: Grammy-nominated saxophonist, singer and songwriter Mindi Abair. One of the most dynamic and accomplished performers in music today, her latest album, “Wild Heart,” debuted at number one on the Billboard Jazz and Contemporary Jazz chart. Abair was a featured saxophonist on “The Late Show with David Letterman” and “American Idol,” and she’s toured with rock legends Aerosmith. Additional award honorees will be announced soon.

The She Rocks Awards will take place from 6pm to 8:30pm in the Pacific Ballroom at the Anaheim Hilton Hotel.