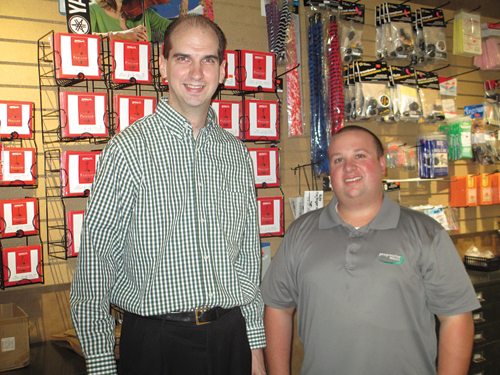 Longevity is a true rarity these days across all industries and especially in the music products industry, where new sources of competition, growing economic pressures and an increasingly distracting everyday life are making it harder to gain and retain customers. And yet, despite all that, in the heart of McKeesport PA sits Progressive Music, a neighborhood institution that is approaching its 70th year. Since opening in 1947, Progressive Music has expertly adapted to the changing times and created a beloved community space dedicated to the art of making music.

Many things have changed since Progressive Music first opened its doors. One of the store’s Founders, Ed Garbett, was the band director at McKeesport High School at the time and, despite there being “a few music stores already in town, the thought was that it would be best to have one that focused more on private lessons,” said Mark Despotakis, who serves as Director of Market Development at the store.

It opened up as a destination for those seeking lessons, repairs and a place to buy instruments, and it quickly became a “lesson hub,” said Despotakis, who noted that the store even taught baton twirling lessons in the early years. “There was a passion for music and music makers, so, although the goal was to be a profitable business, the goal was also to have a place for private lessons and to serve the needs that the high school band director [saw in his students].”

One of the biggest changes Progressive Music has seen over the years is a move away from those all-important private lessons as a core business. Although the store still does offer lessons, renting out its rehearsal space to teachers, “It’s not even close to what it was then,” Despotakis said.

“Not as many students take private lessons as did even 10 years ago because kids have busier schedules now than they ever did, and extra lessons are not a priority like they once were. Many elementary music teachers tell us that they know their students don’t practice outside of their weekly in-school lesson because they participate in so many activities after school,” Despotakis continued. “Lessons today are not a primary money maker; instead, they’re a service we offer for those who are interested.”

These days, most of Progressive Music’s business comes from school band and orchestra instrument rentals, as well as its full-service repair shop, which famously once employed Bill Schultz, the future CEO of Fender Musical Instruments Corp.

To maintain a presence in the local schools, the store creates a catalog and customized order forms for the school band directors, thus making it easy for them and their students to place orders. “Then, our sales representatives deliver items right to schools,” explained Despotakis, who taught the Baldwin High School Band woodwinds before, as well as shortly after,

joining the store and who, in addition, sometimes visits schools as a sales rep. “The breakdown has certainly changed since the business originally opened,” he continued. “You could say that the customer almost exclusively used to come to us and, now, we almost exclusively go to them.”

The store also makes a point of sponsoring a lot of marching band- and drum corps-related activities and events as a way to remain in the hearts and minds of its core customers. “We’ll send a repair technician to be on site for a show to help with emergency repairs. We’ll provide gift bags for directors and, in exchange, we get exposure and, many times, the opportunity to speak to the audience about what we do and about music advocacy,” said Despotakis. “It’s a good place to get our name out to current and potential customers.”

By far the biggest endeavor Progressive Music has undertaken to support its school music business is in the area of advocacy, a cause in which the store became very heavily involved approximately eight years ago. “Of course, it’s a business decision because, if school music programs survive, then we survive,” admitted Despotakis. “But, it’s also a philosophical decision. We’re all connected to music in some way, so we have a passion for music and music education.”

The role of advocate allows Despotakis not only to espouse his love for music but also to make use of his bachelor’s degree in communications and his prior experience working for CNN. Despotakis is also a member of the SupportMusic Coalition’s Steering Committee, the Pennsylvania Arts Education Network Steering Committee and the Pennsylvania Music Educators Association, where he serves as the Chair for advocacy work.

“It’s important to partner with these organizations because it shows our customers that we are bigger than our business and we care about music and music education, and that we’re willing to do so much work outside the normal scope of a business like ours,” Despotakis explained. “By partnering with a school to help them with advocacy-related issues, we see a return in the way of loyalty from the teachers in that school. We’re willing to invest in them, and they’ll do the same in return.”

Despotakis said, is the key to the store’s long-term success.

“I think we’re seen as a partner,” he said, “and not always just as a business. We’re not just selling stuff. We’re impacting lives by exposing students to music, and that’s why I really love this industry.”