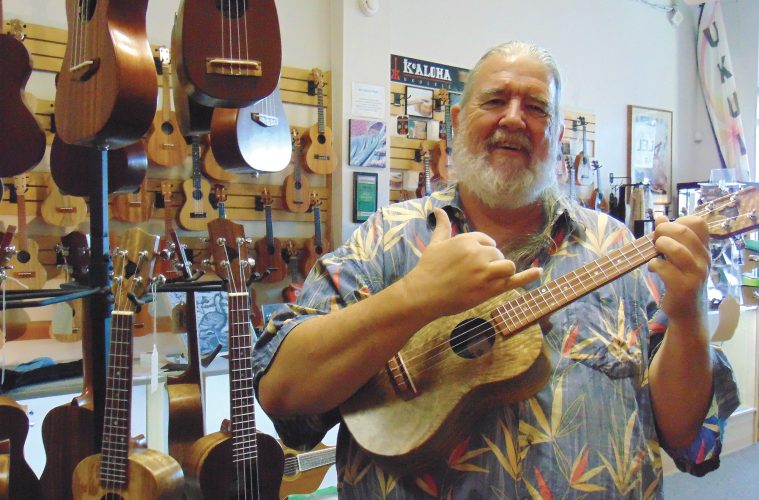 It is something few MI retailers try because of the risks involved. But if executed correctly, MI dealers can create a formidable business when manufacturing products themselves. Officially entering the fray this year to sell its products industrywide (i.e. beyond just its two stores) is Hawaiian Ukulele & Guitar, operator of two MI stores in Waikoloa Beach and Hilo Bay, Hawaii. At The NAMM Show in January, the company introduced its HUG Ukulele Exotic Mango Wood Series, handcrafted instruments made from mango wood and designed to deliver the warm tones of their tropical origin. “With beautiful styling, all-solid wood construction and high-quality resonance, the HUG Ukulele Exotic Mango Wood Series captures the sounds of Aloha and transports players to a sunnier state of mind,” stated the company.

Just as there are different varieties of mangoes, there are different styles in the HUG Ukulele Exotic Mango Wood Series, including Super Soprano Pineapple, Concert, Super Concert, Tenor and Super Tenor, with MSRPs varying by model. Each ukulele has a styling that’s classically refined and sleek, and crowned with HUG’s signature Ocean Wave headstock with figured acacia overlay. Enclosed-gear tuners have the proper tuning ratio for the Aquila 10U New Nylgut Tenor Ukulele Strings. These strings are made in Italy from a patented synthetic material that’s close in sound to authentic gut strings.

This new product series, as well as the decision to become a manufacturer, is the brainchild of “Uncle Uke,” aka Robert Yates, majority owner of the business. He spent his formative years growing up on the island of Oahu and began playing ukulele at the age of 9. At 10, he began playing guitar, studying with a young man who was learning under the legendary Andres Segovia. After high school, he studied music education at Columbus College (now Columbus University) in Columbus, Ga., and began studying guitar building in his spare time. After graduation, Yates started raising a family, and life seemed to quickly get in the way of his musical passions, but he still found time to perform when he could. When he retired from the business world, Yates began playing and performing on a more serious basis, and eight years ago, began building instruments again as part of his retirement. This is how HUG Ukulele was born. Believing that quality does not have to be expensive, Yates has dedicated his efforts to making the HUG Ukulele line second to none in quality and playability. 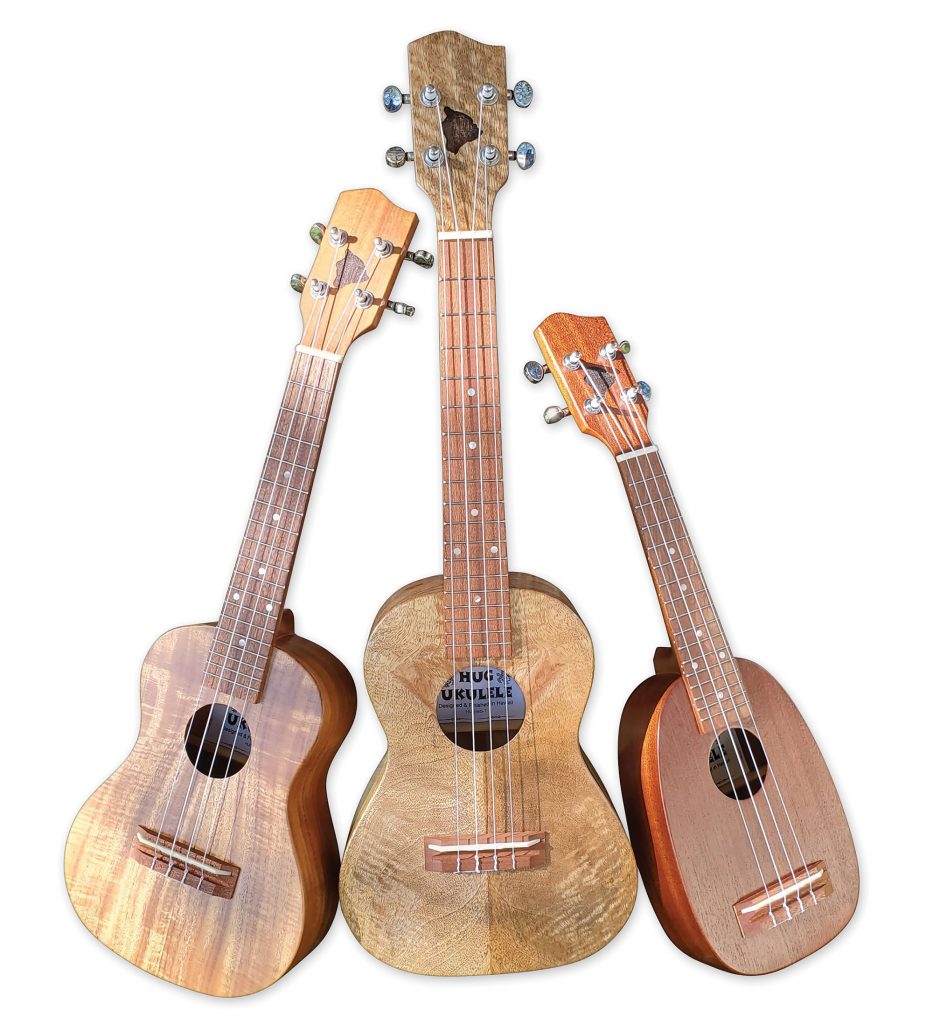 By why make the jump to become an industrywide manufacturer? “Here at Hawaiian Ukulele & Guitar, we have been building HUG Ukuleles full time for the last eight years and selling them in our shops on the Big Island of Hawaii,” Yates told the Music & Sound Retailer. “Soon after we started, we began supplementing our handmade Hawaiian-built ukuleles with less-expensive production models from other well-known companies that we felt were of sufficient quality and playability so as to complement our handmade ukuleles. We became aware very early on that, in order to find high-quality ukuleles to offer to our clients in the lower and mid-price range, we would need to find alternative sources rather than those readily available through the conventional market.
“That is when we began developing professional relationships with master luthiers around the world,” added Yates. “Beginning with a partnership with a small workshop in Taiwan, we began producing a line of solid mahogany ukuleles that were built by hand to my design specifications. This line of handcrafted instruments quickly became an important part of our store’s offerings, and we seemed to always have a problem keeping enough stock on hand.”

This leads to our next question: Why become an industrywide player now? Why choose The 2020 NAMM Show for this launch? “For years, the HUG Ukulele line of fine instruments has not only been a pillar of our business success, but, over the years, dealers from all across the U.S. and Canada have been asking us to wholesale the HUG Ukulele line of instruments to them. The only thing keeping this from happening was the logistics of volume production allowing us the ability to supply all of those who have expressed interest while maintaining the highest quality at the most reasonable price possible. We felt that there was no better time and place to launch the national debut of HUG Ukulele then at The NAMM Show among our friends and colleagues and celebrate the beginning of the newest chapter of our company’s life,” Yates answered.

However, although ukuleles represent one of the fastest-growing segments in MI, HUG has officially entered a crowded field with several players. What makes the company different? “The HUG Ukulele line of fine instruments has grown from this humble start born out of necessity to an offering of more than 60 different ukulele models produced by a network of small independent workshops around the world,” responded Yates. “From Taiwan, Indonesia and China to the Philippines, Canada and the Big Island of Hawaii; this partnership has allowed us to create a line of affordable instruments of the highest caliber by allowing each of us to do what we each do best. HUG Ukuleles have been so well received by ukulele players from around the world who have been making the journey to our shops here on the Big Island of Hawaii for years and returning to their homes with their ukulele treasures. The HUG Ukulele line has been so successful that we knew we needed to find a way to share it with the rest of the ukulele world.”

Also on HUG’s side is its knowledge of MI retailers and their needs. “Being an instrument retailer as well as a builder and performer has given me a different and somewhat unique perspective on the needs of the modern music store,” relayed Yates. “As a builder, I intimately understand what is involved in designing and building a quality instrument. As a performer, I understand what the serious player is looking for in an instrument and what the beginning player needs in order to have the best chance of success. And as a music store owner, I am acutely aware of the shop owner’s need to maintain a livable profit margin in an ever-increasingly hostile business environment.”

Perhaps the final step to success is knowing how to market the brand in order to ensure that not only MI retailers, but consumers, know the product as well. Here is Yates’ game plan: “For more than 20 years, sales of ukuleles had been outpacing guitar sales, and successful ukulele companies raised the quality of their offerings to the consumer. Then, for the last couple of years, new companies entering the market began offering ukuleles that can best be described as being little better than toys more at home on the shelves of Toys ‘R Us than in a music shop,” he said. “This decrease in the quality of instruments being offered on the market has coincided with a downturn in ukulele sales, taking them below the sales of guitars for the first time in more than 20 years. Hawaiian Ukulele & Guitar and HUG Ukulele has been built on the belief that quality and an educated consumer are the best recipe for success in the music business. HUG Ukulele will continue to develop programs and materials to help educate the ukulele world and the buying public and continue to strive to raise the standard of quality of instruments on the market while keeping cost down for the consumer and [margin] percentages up for the retailer.”

To read other reports from the Music & Sound Retailer‘s Under the Hood, click here.