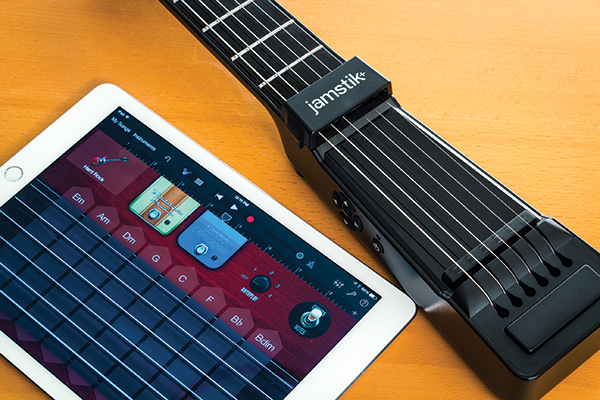 Joe Lamond, President and CEO of NAMM, frequently emphasizes the importance of growing the music products industry, arguing that we mustn’t merely fight over the pieces of the existing pie but, rather, grow the pie so that everyone’s share becomes larger. A major part of doing that is to expand the ranks of music makers. And, because a large percentage of potential music makers are young people, it’s essential for our industry to embrace next-generation technology that integrates with the devices that are already pervasive among today’s youth. Few manufacturers exemplify this drive for technological integration better than Minneapolis MN-based Zivix.

The company, known for its jamstik and PUC, “lives at the intersection of technology and musical experiences,” said Chad Koehler, Vice President. And, with its newest creation, the jamstik+, the company has attained even greater heights. The jamstik+, he noted, is the first real guitar controller built for mobile devices that takes the frustration out of learning to play guitar and that, as a MIDI controller, allows broad creative freedom for musicians at any level of mastery. Industry response has been extremely positive, with the product already having generated considerable excitement.

The road to creating the jamstik+ was, as the cliché goes, long and winding. At the time of Zivix’s founding, the company initially looked at creating a full-size guitar. But, according to Senior Producer Matt Cannon and Senior Music Product Specialist Chris Heille, the explosion of mobile devices caused the team to challenge themselves to create a music product that could go everywhere people’s favorite devices can. The creative process took more than five years, with countless prototypes and numerous small, incremental inventions. “Beyond making cosmetic changes, we had to deal with usability: the need for wireless connectivity and making it play like a real guitar, with real strings and real frets,” Heille explained. “In just the last year, we moved from Wi-Fi to the new Bluetooth MIDI spec, as well as adding a Fishman magnetic pickup, multiple firmware updates and a plethora of app updates.”

Zivix is one of the first developers to design products for Bluetooth MIDI; relative to jamstik+, it helps provide a seamless user experience. “The fact that the jamstik+ takes all its guitar control features and runs on Bluetooth MIDI means users get the fastest play experience possible and the lowest latency available,” Heille enthused. Developers also devoted meticulous attention to the feel of the jamstik+. “We went to great lengths get details like string action and string tension as close as possible to the feel of a full-scale guitar,” Cannon noted. “We had to build our way to a finished string design, and they’re real guitar strings!” Heille remarked that the solid, durable build quality often surprises users. “Although the body is ABS plastic,” he stated, “it’s steel reinforced and boasts real frets on our polished, finger-sensing fretboard.”

“The code that runs the fret scanning is incredibly complex,” Cannon explained. “And, to get the feel as close as possible to the response of a player’s favorite electric guitar, we added a magnetic pickup that drives how those fret scans generate MIDI and capture the fine nuances of playing guitar.” Product developers continue to evolve the code to improve and add features, such as string bend, slides, hammer-ons, pull-offs and tap mode. “In fact,” Cannon remarked, “we’re very excited that, as we enter 2016, we recently released our biggest-ever update. And even more features are coming, as well as efforts to broaden platform support, beginning with Android.”

So, what can a guitar player do with the jamstik+ right out of the box? According to Heille, “A complete beginner can download the jamTutor app series, power up and connect, and begin taking their first interactive guitar lesson in minutes. They’ll learn step by step how to fret, pick and play their first chords—no experience necessary.” A guitar novice who knows a few chords can jump right into the FourChords app experience and start playing one of more than 1,000 popular songs in the library, progressing at their own pace. An established guitar player can open up GarageBand, or any other MIDI-capable apps or DAWs, and start playing guitar with any imaginable type of sound. “It’s like having a recording studio with you anywhere you go,” Cannon enthused. “And traveling musicians love the portability…being able to take it anywhere.”

Progressive options through levels of experience are critical because, although Zivix built the jamstik+ as a learning device to create more guitar players, its development team believes it will continue to hold value as part of a seasoned player’s musical arsenal. “The jamstik+ is one of the most portable solutions for practicing or recording on the go,” Heille noted. “We’ve even had a number of musicians use it on stage in place of synthesizers or instruments they weren’t able to pack on the road.” Briefly summarizing the point, Heille said that, although Zivix hopes jamstik+ learners eventually graduate to a full-size guitar, the product’s nearly unparalleled creative options make him believe that, yes, “their jamstik+ will be around for a long time.”

Recently, Zivix has engaged with Hal Leonard as its distribution partner for the musical instrument retail channel. According to Koehler, the company’s excited to work closely with retailers to help tailor the right message. “We love traditional music retailers,” he affirmed. “The lessons side of that business is strong, and we feel the jamstik+ educational system will assist in creating new, lifelong customers for them.” Retailers also know that their customers don’t live in a tech vacuum, he said. “Those customers carry mobile devices, and they’re looking for new ways to integrate their musical experiences with the technology that’s having an impact on every other area of their lives,” Koehler emphasized. “Our products—in particular, the jamstik+—give retailers a new opportunity to make their brick-and-mortar business a resource for those customers and their technology.”

Zivix’s jamstik+ is currently shipping for $299.99. Through the company’s partnership with Hal Leonard, plans are already in place to put a strong emphasis on sales through the MI retail channel this year.