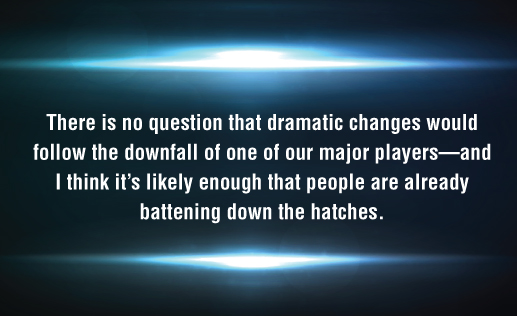 If you’ve been following the trades, you might be gleefully crowing over the difficulties Guitar Center seems to be having. Although I shed no tears for the reversals of those who live by the sword, I believe we could be heading for a Dickensian contrast: “It was the best of times, it was the worst of times….” Were GC to go down, or be radically changed or diminished, many would rejoice, of course. Too many retailers believe they have suffered at the hands of the giant to have much empathy for its plight.

But, realistically, where might that leave the industry? Although I certainly don’t subscribe to the “too big to fail” line of reasoning, there is no question that dramatic changes would follow the downfall of one of our major players—and I think it’s likely enough that people are already battening down the hatches, to the detriment of the industry and its smaller retailers.

In case you haven’t been watching the reality show, here’s a quick recap:

• Around the end of May, Standard & Poor’s cut its debt rating on Bain Capital-owned Guitar Center Holdings yet again, from “B-” to “CCC+” due to “weak operating trends.” Part of this is certainly due to the $1.56 billion in debt load and the quarterly interest payments of $41 million due on that huge amount.

• Reported first quarter results show sales described as “sluggish” or “lackluster” by some and as “disastrous” by others. A quarterly loss of more than $23 million is not upbeat news.

OK, so GC seems to be struggling. Aren’t we all? Eroding margins, declining orders and escalating costs are common. The difference here is that these guys account for a significant percentage of our industry sell-through, and many suppliers are either wringing their hands or strategically distancing themselves from the company. They have to. If GC were to go down before it insulates itself, it could be the industry equivalent of a nuclear winter.
Here’s the tipping point. One area where…