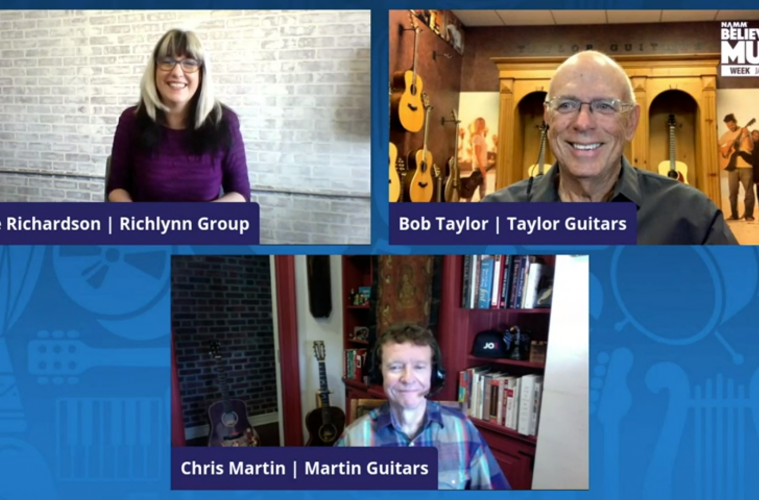 In “Titans of the Industry, Part II: 2021 Outlook and Beyond,” Taylor Guitars CEO Bob Taylor and C.F. Martin CEO Chris Martin IV joined Kate Richardson of the Richlynn Group to offer their perspectives on the future of the MI industry and the guitar market in particular. The session took place on Jan. 21, 2021 as part of NAMM’s Believe In Music Week.

Richardson started by asking both CEOs what products they were most excited about releasing in 2021. Martin responded that he is most looking forward to C.F. Martin trying to “re-engage with the ukulele community,” which he estimated is a $150 million global market. According to Martin, his company only currently has a 1% share of the global ukulele market, and he joked that his team hopes to double that number.

Taylor responded that Taylor Guitars released its American Dream and Grand Theater lines this year to “really try and help out our dealers.” However, he said that his main priority for 2021 is meeting the surging demand for his company’s existing products. “We’re always excited about what we’re putting out new, but at the exact same time, we have so many orders that we don’t know how to make them. So […] in 2021, we’re going to try and introduce stable production. And that right there is going to help dealers.”

Martin agreed, adding “We aggravate the situation by making more new products on top of the products that we can’t make enough of right now.” Both Martin and Taylor attributed the current high demand for their company’s products to an ongoing “guitar boom” the likes of which they have only seen three or four times before in their forty-plus-year careers.

The two then shared some perspective on how the guitar market and the art of guitar making have evolved in that time, attributing that growth to the camaraderie of the MI industry and the contributions of many great guitar makers over the years. Both agreed that cooperation between competitors is healthy for the industry as a whole.

Richardson then asked what the biggest challenge each company had to overcome this year had been, especially with the COVID-19 pandemic still looming large.

Taylor pointed to supply chain issues, although he added that when it comes to guitar manufacturing, “There’s not that much we have to buy, and everything else we make out of wood. So I would say we’re better off than a company that is subcontractor- and hardware-dependent, because we actually make the guitar.” Taylor also said that the pandemic’s effects on international trade haven’t been as severe as they could have been because guitar-makers are used to stockpiling raw materials. “Traditionally, a guitar-maker always measured their wealth by the amount of wood they had on the shelf in the shop when they died,” Taylor said.

Richardson then asked Martin and Taylor to offer their predictions for the future and how the current boom in guitar sales will affect the market going forward.

Taylor responded that “We think that the market will certainly ratchet up, but in some cases I’ll admit that we could be selling tomorrow’s lunch today. Guitars are going crazy, and we’re delighted about that, but pro audio is not. So it could happen that, 18 months from now, people go ‘I need a PA system and some amplifiers and microphones to use those guitars I bought in 2020 and ’21,’ and there could be a trimming back.” However, he added that he has never seen a boom as large as this one in the guitar market before, and that “I think we could hold onto a 20% increase in what was there before [the pandemic].”

“A lot of people that never got closer to a guitar than dreaming about it now have one, and they’re trying to make it work,” Martin said. “Some of those people will stick with it. So those are new customers.” He added, “And it’s easier to learn today, particularly because you’re going to have to learn digitally, virtually anyway. You’re doing it over the internet, and there’s plenty of opportunity out there.”

Both Martin and Taylor were extremely optimistic that the current health of the guitar market will bode well for future sales. “We look at our sales stats every week, and we go ‘It’s another world record!’” Taylor said. “We wrote orders for more guitars than Martin and Taylor wrote in a year in 1980, and we’ve done that in three days, or four days.” Martin added that “We’re bigger than we’ve ever been, and [Taylor] is as big as us, so the market is bigger than it’s ever been!”