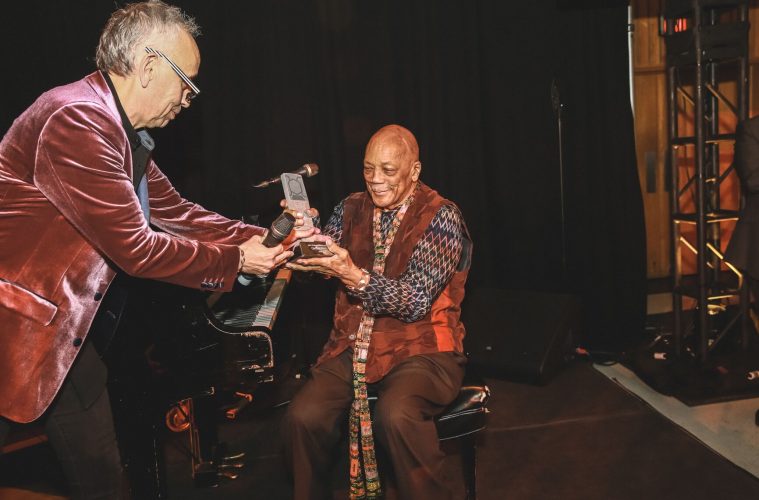 AKG, a division of Harman International, a Samsung company, celebrated its 70th anniversary during a star-studded affair on Nov. 12 at Capitol Studios, housed within the Capitol Records building in Hollywood, Calif. The Music & Sound Retailer was on hand at the event, which included tours of the studios, cocktail hour, DJ services provided by singer and DJ Kita Klane, a performance by jazz prodigy Jacob Collier and the presentation of an AKG Lifetime Achievement Award to the legendary producer Quincy Jones. Guests also received swag upon exiting the party, including a poster hand-signed and numbered by Jones, as well as a pair of K371 headphones.

“Tonight, it is my distinct honor to present AKG’s lifetime achievement award to a living legend who has shaped the sound of our lives,” said radio and television presenter Nic Harcourt, who introduced Jones. “… Quincy has utilized AKG’s creative tools for more than five decades. …  Herbie Hancock called him ‘Proof of the greatest of a single human being.’ That greatness, humanity, truth and sound; that man we celebrate here tonight.”

“Thank you from the bottom of my heart,” responded Jones upon accepting the award. “This is as good as it gets for an 86-year-old, bald headed, bow-legged [person]. [I have] seven kids and eight grandkids. Life is great. I wish everyone a long life with love to share, health to spare, and most importantly, friends who care. God bless you.”

“Quincy Jones has been so instrumental in helping me create music and be a human being of value,” Collier said in-between songs in his set. “He has opened so many doors for me, both as a friend and someone who inspired me for 25 years. I will forever grateful to you Quincy, for everything you have given to me and the world at large.”

Regarding AKG, Collier added he has a small room in his room where he has created music for his entire life. “So much of the gear was created by AKG. So, I want to say ‘thank you’ to the whole [AKG] team.”