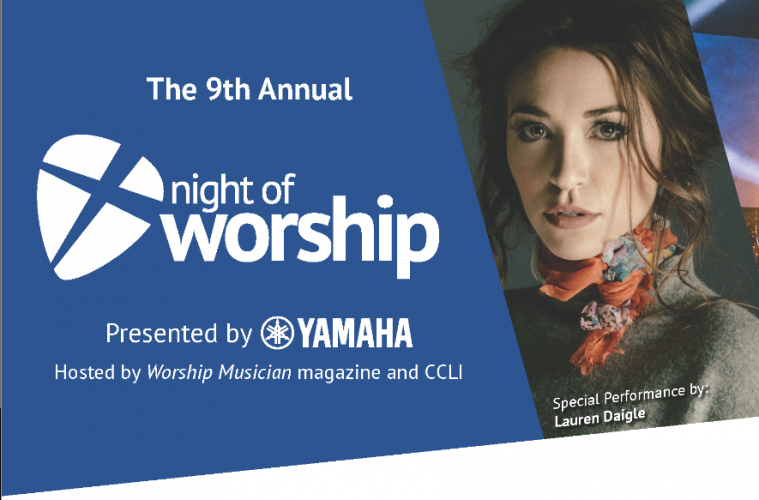 For the ninth consecutive year, musical artistry and inspired worship will converge at the NAMM Night of Worship, presented by Yamaha.

Featuring performances by Christian music artists Lauren Daigle and For All Seasons, and hosted by Worship Musician magazine and Christian Copyright Licensing International (CCLI), this lively session will take place in the Pacific Ballroom of the Hilton Anaheim on Thursday, January 25 from 7 p.m. to 9 p.m. It also will be streamed live on the CCLI website at nammnightofworship.com.

Southern California-based For All Seasons received immediate acclaim for their debut single, “Higher.” The song hit the Top 4 of iTunes’ Hot Track chart for the Christian & Gospel genre on its release date, has enjoyed extensive airplay and has been added to popular streaming playlists such as Spotify’s Top Christian Hits. “Higher” currently has over 300,000 listens on Spotify, and its lyric video has over 40,000 views on YouTube.

Night of Worship highlights an exciting range of technical, musical and artistic offerings at NAMM, geared toward the unique needs of houses of worship. Participants interested in attending the Night of Worship must have a NAMM badge, but can register at namm.org/attend using the promo code NOW2018 to get a badge for only $25 — a 50-percent discount. The NAMM badge also provides access to all four days of the NAMM show and to the Yamaha “All-Star Concert on the Grand” at NAMM 2018 on Friday, January 26.