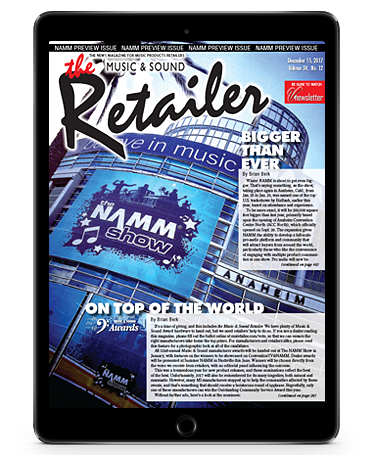 On Top of the World

We present the nominees for all 29 categories of the 32nd Music & Sound Awards. Please make sure to vote for your favorite manufacturer products, representative and community service provider, in addition to selecting the latest entrant into the Music & Sound Retailer’s Hall of Fame.

The NAMM Show is set to take center stage in Anaheim, Calif., once again next month. Learn about several changes, including 200,000 square feet of additional exhibit space, plus much more, directly from NAMM president and CEO Joe Lamond.

Lee Oskar has the rare distinction of being a big name in both the music and music instrument industries. The founder of Lee Oskar Harmonicas offers plenty of info about his company, and he also takes time to discuss the band War, for which he is a founding member, as well as his role in the charity Playing For Change.

MI Spy heads out west, specifically the Pacific Northwest. Did Seattle offer up an “emerald in the rough” among The Trading Musician, Guitar Center, American Music and Dusty Strings?

Allen McBroom explains why it’s easier both financially and in terms of time and effort to maintain current customers versus acquiring new ones.

Randy Shayler, CEO of Zeswitz Music, is not a musician. But the owner of an MBA from Harvard Business School has plenty of business acumen, which has propelled the Reading, Pa.-based MI store to great heights.

Gabriel O’Brien explains why it’s more important than ever to not only effectively communicate with each other, but also to make sure we’re delivering the information in the correct context and via the best medium.

Dan Vedda focuses on the things that drive customer dissatisfaction by providing a short list, gleaned from direct contact with customers of course, but informed by studies and surveys, including the American Customer Satisfaction Index.

We go “Under the Hood” to check out Cerwin-Vega’s CVE series of loudspeakers, which carry the “Technology Simplified” tagline.