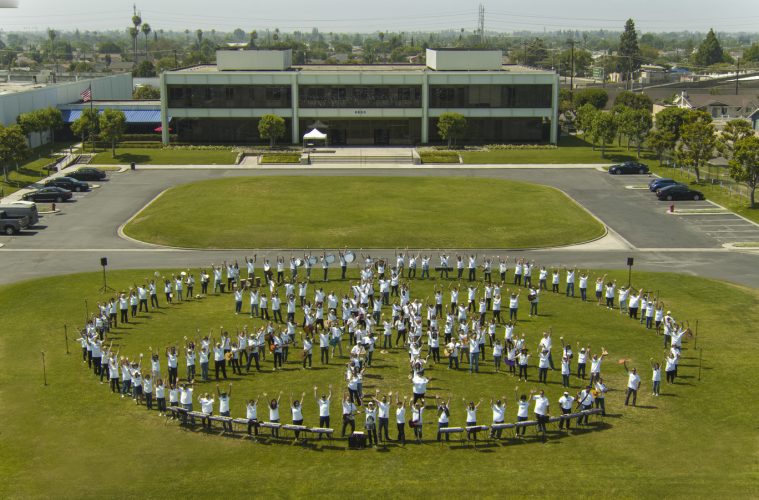 More than 200 employees of Yamaha, the world’s largest musical instrument manufacturer, performed on June 21 in honor of International Make Music Day, a festival of music celebrated each year in more than 120 countries and across the United States.

The performance took place on the great lawn in front of Yamaha Corporation of America headquarters in Buena Park, Calif. Employees played the song, “Twist and Shout” while in formation of the company’s famous tuning fork logo, as a drone captured the excitement overhead.

“Music and Sound is what we do here at Yamaha, so what is more fitting than celebrating with all of you, and making our own music,” said Tracy Bargielski, Yamaha vice president of human resources, addressing the company’s employees. “Creating music takes dedication, perseverance and passion. Today, we get a chance to share our passion for what we do because at Yamaha, every day is Make Music Day.”

“Yamaha is highly involved in music education and the legislation to support such efforts,” added Elizabeth Swift, mayor of Buena Park, who attended the event and presented the company with a Certificate of Recognition for its efforts to celebrate International Make Music Day. “As a former educator and school board member, I believe that all students deserve a well-rounded education that includes music and the arts. I want to thank each one of you employees for displaying your talents today and celebrating the power that music possesses to bring joy to the world.”

The genesis of International Make Music Day dates back 35 years to France, when Jack Lang and his staff at the Ministry of Culture dreamed up an idea for a new kind of musical holiday — a day where free, live music would be everywhere. Anyone and everyone would be invited to join and play music, or host performances. The event would take place on the summer solstice, June 21, and would be called Fête De La Musique, which translates to both ‘festival of music’ and ‘make music!’