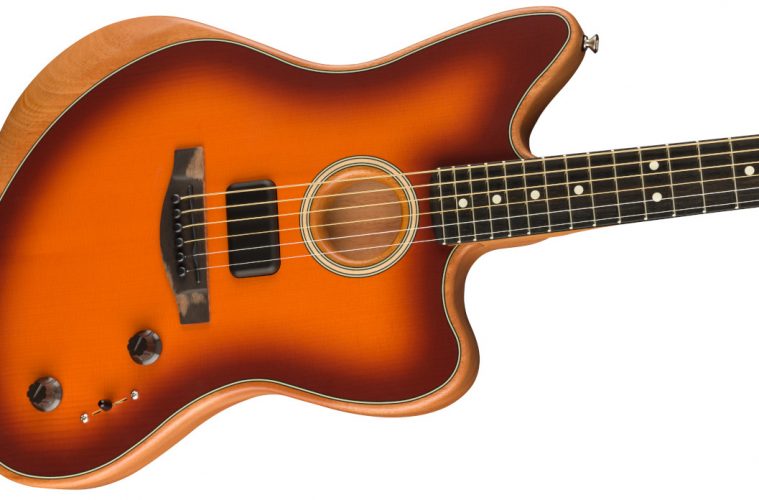 As part of its 75th anniversary celebration, Fender announced the launch of its American Acoustasonic Jazzmaster.

Fender Musical Instrument Corp., in coordination with the company’s 75th anniversary this year, is going back to the 1960s for a reissue of one of its classic models — with a lot of modern enhancements, of course.

Fender on March 16 announced the launch of its American Acoustasonic Jazzmaster, which the company states is the brand’s “most sonically diverse guitar to date.” Launched in the ‘60s, the original Jazzmaster guitar model was one of Fender’s first body shapes and was a hit with end users thanks to its tremolo string system — an arched string system that makes acoustic sounds louder — which many in MI called original and groundbreaking at the time. Now considered an iconic guitar by many artists, the design has been refined for more than 60 years to create the American Acoustasonic Jazzmaster, which features Fender’s most versatile, modern and ground breaking technology, the company stated.

The American Acoustasonic Jazzmaster’s appeal is its ability to sound like 10 different Fender guitars: five acoustic, five electric and any combination in between, all accessed via a single Blend knob. The technology to deliver these sounds took five years of research and development from Fender, which developed many new features, including an acoustic engine, ergonomic nuances to enhance playability, hybrid tone options and new colorways that are exclusive to this model.

“The Jazzmaster has amassed an avid following for the past 63 years with artists like J Mascis, Troy Van Leeuwen, Nils Lofgren and Kevin Shields using it as their guitar of choice on stage and in the studio,” Andy Mooney, CEO of Fender, told the Music & Sound Retailer. “Since 2019, our American Acoustasonic Telecaster and Stratocaster guitars have opened up new sonic possibilities for players, and this time, we wanted to get Fender offset lovers in on the fun.”

He added, “The Jazzmaster model is unlike any other Acoustasonic instrument we’ve released, because it unlocks all-new tones uniquely voiced for the instrument. As more players get their hands on this guitar, we can’t wait to see what soundscapes they discover and create.”

Features available on the Jazzmaster, as well as the entire Acoustasonic family, include a Blend knob that allows access to infinite new tones never heard before in a single instrument. “A few turns toward the right, and you can dial in the rich acoustic tones of Joni Mitchell’s early albums. A few turns toward the left, and you arrive at the raucous feedback of Thurston Moore and Sonic Youth, as well as everything in between,” stated Fender.

And all Acoustasonic models also feature a carved neck heel that gives players easier access to the higher frets, which is a direct response to feedback from the Fender artist community.

Editor’s note: For an in-depth look at Fender’s 75th anniversary, check out a special story that will appear in the April issue of the Music & Sound Retailer.