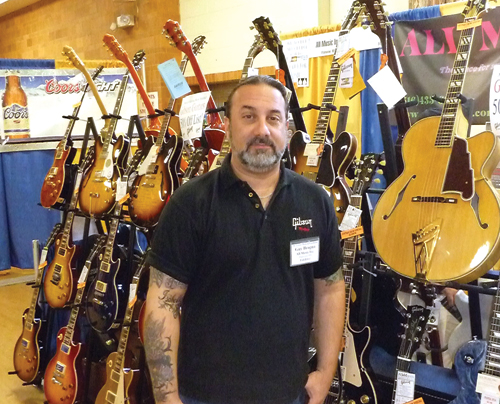 The Sound Of The Underground

The main location for All Music Inc. in Plainview NY, on Long Island, is in a precarious position within the area’s retail landscape. Not only are there two Sam Ash stores and two Guitar Center locations within a 15-minute drive, but the store itself is also only noticeable to the most eagle-eyed of customers.
“We’re just a doorway and then it’s a basement store, so it’s a struggle to get people to even know we’re here,” said the store’s Owner, Guy Brogna, who first came on board 12 years ago following a career as a touring bass player for national acts like Ludichrist and Scatterbrain. “Some of our customers have called us the Kings of the Downstairs,” he continued, jokingly. “In fact, our e-mail address is Music Dungeon.”

As a result, he and his partner, store Founder Irwin Natman, have had to work extra hard to get the store’s name out to the community. One of Brogna’s first major tasks when he joined the ranks at All Music Inc. was to do just that by turning the store into a destination for guitar players across the area. “They had approximately 100 guitars on the floor at the time I started, but, as a bass player, I felt I wanted to create more of a presence in the guitar market. So, I brought in brands like Fender and Taylor; now, we have about 600 to 700 guitars,” said Brogna, who boasts that his store is now one of the few Gibson Five-Star Acoustic Dealers in the world.
“I search out items that are rare or limited editions…the stuff you don’t really see around,” Brogna continued, “whereas lots of stores out there will get the same Strat or Les Paul. If you go to five stores and see the same thing over and over again, it’s like, ‘Eh, OK.’ That’s why I look for these special things.”
Its impressive guitar selection, including a special vintage room, is a great attraction at the Plainview store, but All Music Inc. also sells plenty of other items, including band and orchestra instruments, books, effects, amps and keyboards. In addition, All Music Inc. has a second location in Hauppauge, which is an approximately 25-minute drive away. Brogna describes the Hauppauge store as half store and half lessons, with about 200 students on the…