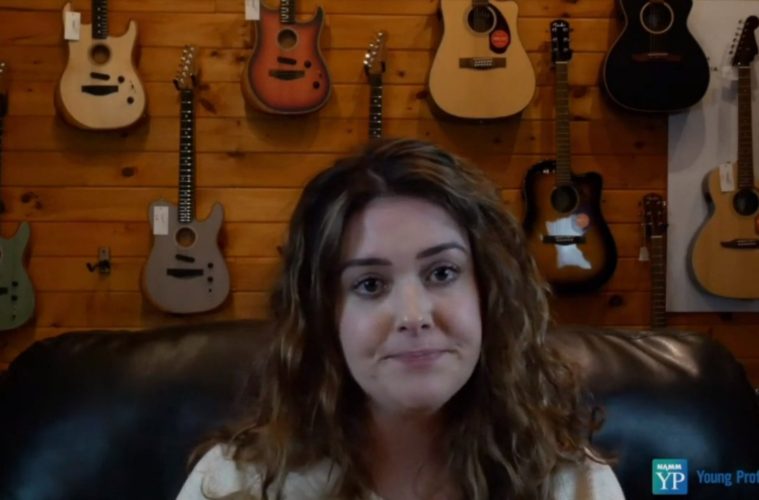 Less people in the store, increased dollar size of transactions and a huge explosion of online sales are the major changes Melissa Ceo, business development manager for C.A. House Music, has seen since the COVID-19 pandemic began, she stated during “NAMM YP: Lessons Learned and Moving Forward From the Pandemic.” C.A. House Music, which has four locations in Ohio and West Virginia, has been forced to make several changes, she added during NAMM’s Believe in Music Week session.

“When we were shut down, we went to curbside sales and delivery,” she said. “We were able to reopen in six weeks, but we still have curbside and delivery.”

Regarding online sales, Ceo said Reverb sales have increased tremendously to the point where before, she could ship all online orders herself. Now, the retailer needs a plan to make those shipments. “The pandemic is so difficult, but it has shrunk the country,” stated Ceo. “We have seen sales come from places we have never seen before, like the west coast. Customer acquisition used to be expensive, but that has changed.”

Another boon to C.A. House Music’s sales is old inventory is now selling quickly, unlike ever before, because new products are simply not available to customers, said Ceo.

However, C.A. House Music’s business development manager acknowledged these positive trends all pertain to combo sales. Band and orchestra sales are a different story. Jeremy McQueary, president of Indianapolis-based Paige’s Music, said B&O business has not been as stellar. “There is no shortage of instruments. There are not as many kids starting out [in music],” he said. “And B&O sales are different online, so we have had to double down on customer service. 2020 was not stellar but could have been much worse.”

Jeremy Payne, brand director and national accounts manager at The Music People, added he has been “really proud of retail. It has rebounded so well.” But with live music nonexistent, production professionals are hurting badly, so only some segments of MI are doing well.

In the future, the pandemic will change some things for good, relayed McQueary. This will likely include fewer large-scale in-person events as people will not immediately be comfortable around a large group of people. Virtual instrument rental nights are another thing that are likely here to stay. This may not be a positive for sales, McQueary said, as retailers are used to having contracts signed on these rental nights, which often take place in January. Now, he expects these monies to come in several months later in the year.

Ceo noted that addressing safety at schools is going to be another thing MI retailers must prepare for in the future. For example, she pointed out that the state of West Virginia is mandating bell covers. This will change C.A. House Music’s inventory, but could also allow for additional sales, she said.

Lastly, the three panelists were asked what they would tell themselves 12 months ago if they knew the pandemic was coming. “I would go to a desert island and drink margaritas,” responded Ceo, to which Payne responded he would buy every hard-to-find pro audio product, resell them, buy a desert island with the proceeds and drink any libation of his choice.

On a serious note, CEO answered that she would have utilized C.A. House Music’s staff more to advance long-term projects.

“Much like Melissa said, people are our greatest resource,” added Payne. “I would utilize all people inside and outside the organization.”

“I would have taken action sooner,” concluded McQueary.