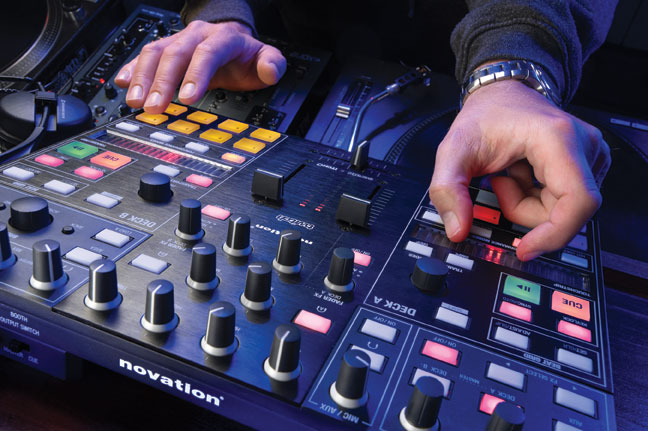 When it comes to products making waves and grabbing headlines in the past year, few have drawn wider interest, and earned greater acclaim, than Novation’s Twitch, dubbed the touchstrip DJ controller and the proud recipient of a Music & Sound Awards nomination as Best DJ Product of the Year. So, in our inaugural Under The Hood technological spotlight, this product for the modern-day digital DJ seemed a natural choice. The Music & Sound Retailer drew on the expertise of Brandon Carroll, Field Trainer/Product Specialist, Focusrite Novation, to elucidate the value proposition that Twitch presents, as well as home in on the features and specs that make this product, released last summer, stand apart.

Twitch, a certified Serato controller, comes with Serato ITCH software. “Serato has two major forms of software,” explained Carroll, “ITCH and Scratch.” Noting that ITCH is meant for DJ USB controllers, he added that ITCH has comparatively more effects than Scratch does. The included DJ software can automatically beat-match tracks to let users get creative with their DJ sets, and it has unique touchstrip controls that enable users to do some pretty impressive things with ITCH’s new performance tools. Carroll added that, although, yes, it comes with Serato ITCH in the box, “You can go on the Novation Web site and download software to make it work with Traktor, and there’s a Traktor overlay, as well. You can also download software that makes it a controller for Ableton Live.” Obviously, the operative word here is flexible.

As noted, Twitch has essentially been christened the touchstrip DJ controller, and the two LED-backlit touchstrips are core to the product’s capabilities. “The touchstrips allow you to do a lot of things in regard to controlling the ITCH software,” Carroll began. “You can drop a needlepoint at any location in the track. One full swipe of the touchstrip will bring your needle anywhere, from the start to the end of the track. So, if you need to play ahead to an important spot, it’s easy to find it quickly with the visual of the waveform, and you can see where the needlepoint is going to drop.” Of the touchstrips, he continued, “You can use them basically to scrub the audio file, almost like you’re doing it with a record. You can do scratch effects, and you can flick it really quickly and it’ll be like flicking a record really quickly, where it speeds up and slows down.”

The Twitch control surface—with two banks of eight large triggerpads, professional cross-fader and per-channel Fader FX—opens up a range of possibilities for digital DJs and the new generation of controllerists. The touchstrips permit users to manipulate their tracks using gestures, just as one would on a multi-touch trackpad or touchscreen. Twitch users can grab, pinch, tap and nudge to navigate, perform and improvise with tunes.

Twitch has four performance modes (Hot Cues, Slicer, Auto Loop and Loop Roll) that interact seamlessly with ITCH, so a user can mash up his or her tracks and mix them back together, completely on the fly. Hot Cues mode permits users to jump instantly to markers in their tracks, and re-trigger up to eight different points, just as one can with a sampler. Slicer mode allows users to do something completely new: re-arrange their tracks while they are still playing using a step sequencer-style user interface.

Twitch’s Auto Loop and Loop Roll modes allow users to further manipulate tracks and, in combination with the touchstrips, change loop lengths in the mix to create glitch effects—all without falling out of time. “You can shorten and lengthen your loops by pinching in and out with your fingers. It’s very similar, for instance, to zooming in or out on an iPhone,” Carroll added. “That’s a very cool feature, and can be used to do live-performance stutter edits and stuff on the fly.” Effects can be assigned to the channel faders at the touch of a button, so users can perform tricks with fader movements as well as with the knobs of the Master Effects section.
Designed both for the road and for the stage, Twitch is robust and compact, ready to slot into tight spaces in the DJ booth. “Because Twitch doesn’t have platters,” began Carroll, “it’s extremely light and portable. It is essentially the size of a 15-inch MacBook Pro, but a lot lighter.”

He added, “I can fit it in a decent-sized laptop bag that accommodates a 15-inch laptop.” Twitch is also bus-powered: Simply plug in the USB and audio cables, and you are ready to play. It includes a high-quality two-in/four-out USB audio interface with balanced, high-level master and booth outputs, which can be connected directly into any PA system or home setup with excellent audio quality. Quarter-inch and mini-jack headphone outputs supply a loud, clear signal to any set of headphones. And, there is a Mic/Aux channel with mono jack and stereo RCA inputs, so vocalists and MCs can be blended with an external audio source, such as an MP3 player, and routed through Twitch’s effects and master outputs.

As the product has been on the market for some six months, it could be said the verdict is in…and its Music & Sound Awards nomination tells the tale. “We’ve seen a lot of great feedback on Twitch,” Carroll confirmed. “There are great new videos just hitting the streets and YouTube that show off some of its features.” And Carroll’s enthusiasm for Twitch is certainly palpable, as when he explained its near-equal suitability for novices and experts. “It’s a product where an entry-level guy, once he just gets his hands on a couple of things, won’t be super-confused and can dig into it,” he remarked. “But, at the same time, an advanced DJ can still take advantage and push this controller to the limits to do some really cool, tweak-head stuff that the beginner might not be able to do.”

The DJ controller category isn’t a brand new segment—there’s a lot of product out on the market, for sure—but Novation’s Twitch, with its unique blend of features and capabilities, along with its robustness but concurrent portability, all at an attractive price point, certainly rocks the landscape, while making many digital jocks very happy.