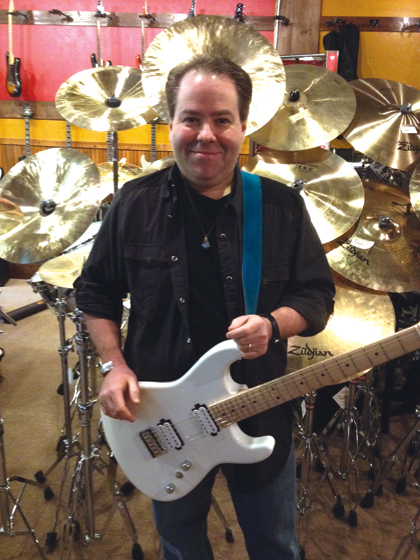 “We want more people playing music, and we want to help them with those dreams,” said Gittli, who began working for the store 16 years ago. “We train our customers on how to use what they bought and how they can get the most out of it. And, if you buy an amp from us and it blows up just before a gig, we’ll lend you something. We’re that kind of place.”

Mom’s Music has worked hard to maintain a strong presence in the local music community since first opening its doors about 30 years ago, and that focus has only gotten stronger as the years have passed. When Gittli—a childhood friend of Max and Mark Maxwell, sons of store Owners Marvin and Beverly Maxwell—first joined the store to run its guitar department, “we had about 60 students and the store was mostly retail,” said Gittli, who said the store sells guitars, drums, keyboards, PAs and accessories, in addition to doing installations and renting band and orchestral instruments. Today, Mom’s Music is much more focused on education, but without sacrificing retailing. Gittli estimates that the business is split 50-50 between lessons and in-store sales.

“The biggest thing was to refocus the store to get younger players going early. We wanted them to have music in their lives for longer,” said Gittli. “I think it was a smart move for us because most stores have education as an afterthought, and the stores out there that don’t have a lesson program haven’t been able to survive in recent years.”

The conscious decision to modify the focus was made six years ago, prompting the store to move after 25 years from its original location to a 13,500-square-foot store with 21 lesson rooms to accommodate 400 private lessons per week. Mom’s Music employs 21 teachers, most of whom “are college-educated and majored in music,” said Gittli. “These are well-respected people with street cred, and they do lots of shows in the community. Students can go out and see them on the weekends.”

Gigging musicians with ties to Mom’s Music are some of the greatest ambassadors for the store. Just ask Gittli, who is one of six Mom’s