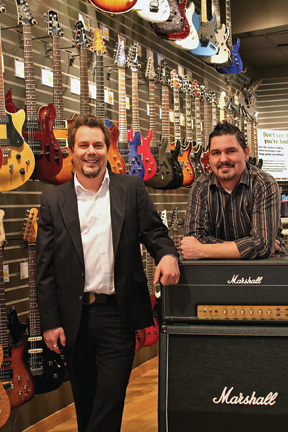 Sweetwater recently hired two new managers. The new Senior Category Managers are the most recent additions to Sweetwater’s recently reorganized Merchandising Department. Jon Croft is the new Senior Category Manager for Guitars and Drums. Croft comes from the L.A. area and possesses a wealth of knowledge in merchandising guitars. Most recently, he was the Platinum Guitar Manager for Guitar Center at its corporate headquarters in California, responsible for all higher-end guitars in the G.C. chain and online. Prior to that, Croft managed one of G.C.’s largest stores in Fountain Valley CA and, earlier, served as a Sales Manager in the chain’s Hollywood store. He has also worked on the vendor side of the business for ESP Guitars and VHT Amplification, and began his career in two boutique guitar shops in the Seattle area.

Senior Category Manager Matt Duncan has come to Fort Wayne from Medford OR, where he was the buyer of Amps, Pedals and Effects for Musician’s Friend. This is the same category Duncan will merchandise at Sweetwater. Previously, he ran his own security systems business but, earlier in his career, he spent seven years in sales and management at the Guitar Center store in Medford.

Vice President of Merchandising Phil Rich said, “I’m very excited to have Jon and Matt on the Merchandising team here at Sweetwater. Their extensive MI experience in both sales and merchandising will be a key factor for our continued success and growth, particularly in the area of guitars and amps, where their talents will be utilized.”