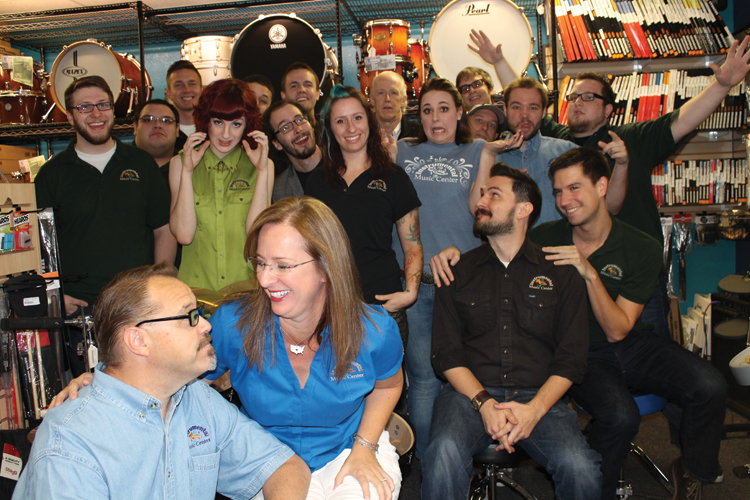 Sax And Violins In Tucson

Neither Michael Faltin nor his wife, Leslie, dreamed of becoming business owners. He was a band director, musician and former member of the Drum Corps. She earned her Bachelor’s degree in Chemistry. However, when Michael began teaching music in the local middle schools, “I was frustrated with music store choices in our town and saw a big need for a good music store,” he said. So, Michael turned to his wife and said, “Let’s open a music store,” to which Leslie replied, “That’s a terrible idea.”

“We had never opened a store before and we were apprehensive,” Leslie recalled. “It was terrifying to sign a lease.”

After mapping out all the MI stores in the area so as not to poach another’s business, Michael and Leslie set out to find the perfect location for Instrumental Music Center, a full-line music store that carries everything short of acoustic pianos. They found a 1,500-square-foot former restaurant in a strip mall and, although they were originally turned off by its odd shape, which Michael describes as being shaped like “home plate,” they eventually decided to take it and, now, they’re thankful for the creativity it allowed them.

“We kept some of their sinks, turned the counters into work benches and used what we had,” Michael said. “Being part of a strip mall, we were able to move into other stores as they closed. We bought out the flower store and got their 40-square-foot, walk-in fridge, from which we used the insulation to make a soundproof studio. We opened little by little and, because we had those constraints, it forced us to be creative.”

Today, the main location of Instrumental Music Center measures 5,000 square feet and houses the store’s repairs and rental services, which the Faltins refer to as the store’s bread and butter. As a band director, Michael had a particular interest in band and orchestral instruments, and it’s these items that Instrumental Music Center rents to both schools and parents.

“Tucson is one of the worst-funded school districts in the U.S., so we are more about the parents and the children who go to the schools, although we do have good relationships with the band directors,” Michael explained.

Added Leslie, “The programs are always under threat, but I don’t subscribe to all that ‘the sky is falling’ talk. There is enough parental support that would allow for a private alternative. We try to be calm and, every year, it works out. We’ve been going through this for a decade.”

The main location of Instrumental Music Center is also where the business houses some eye-catching items designed to draw customers’ interest, rather than their dollars. “You carry some big items that wow the customers, but that isn’t what you sell. It’s a marketing expense,” said Michael. “But you can only have that if you also have some lesser items that sell.”

Among the big-ticket items is a 32-inch gong that is moved around the store to draw visual interest and, soon to come, a QSC PA system. “Not that most people can afford it, but it’ll wow them,” said Michael, “Really knock their socks off.”

The Faltins run a second shop, opened in mid-2011, which measures 2,500 square feet. They split their time equally between the two stores; product can be moved easily between one and the other within 24 hours.

“The second store is more of a satellite: an outlet of the first store. So, it requires less maintenance,” explained Leslie. “Items like the 32-inch gong aren’t in the satellite store. There, we only have bread-and-butter items.

That’s the model from which we can make cookie cutters all over Arizona. It’s not as fun, but it’s clean and functional.”

Although they would love to open a few more stores, Michael and Leslie are not looking to open additional locations at this time, because they are busy caring for their two young children, ages nine and 10. “We are having a blast with our young kids,” said Leslie. “They are the perfect age for travel and investing in life lessons.

Any expansion would cut into that kid-time.”

Although they might not be looking to “take over the world,” Michael and Leslie Faltin do want to leave a strong mark on the community of Tucson. Instrumental Music Center proudly participates in many community events and music festivals, such as the Tucson Festival of Books, which has 140,000 attendees. Store staff was there to meet parents and hand out kazoos. They also donate to local music programs, giving a clarinet to the Girl Scouts, a guitar to the Tucson Girls Chorus and upright basses to both the Tucson Jr. Strings and the Tucson Civic Orchestra. “We try really hard to give back to our community,” said Leslie. “These are things that that big jungle Internet company doesn’t do, and it sets us apart.”

“Tucson is a fun town,” said Michael. “It’s big and small at the same time.” It’s that community feel that the Faltins make sure exists in their stores as much as it does in their town.

“I’m not a big fan of mission statements, but I felt compelled to create one: sales are a byproduct of developing meaningful relationships with customers,” Michael stated. “If we can become friends and know things about each other, that’s something the town vibes with. When relationships are strong, people will buy local.”