We’re living in a digital world, and evidence of the rise of the machines is all around us. One effect that has had on the music products industry is the increasing popularity of digital instruments, such as digital drum kits. Granted, ever since the first digital drums hit the market, there have been acoustic drum fundamentalists who are quick to turn up their noses at the strange plastic gizmos. But, as the technology behind the kits has improved and the stigma has fallen away, more and more drummers have realized that digital drums are, at the end of the day, pretty damn cool and a ton of fun to experiment with.

Roland is one manufacturer that has been on the forefront of the digital revolution, and the company is a proud champion of digital drums. “Roland’s intention is not to replace acoustic drums but, rather, to offer players another instrument, not unlike the distinction between acoustic and electric guitars, or acoustic pianos and synthesizers,” Drew Armentrout, Roland’s Product and Artist Relations Manager, Drums and Percussion, explained. 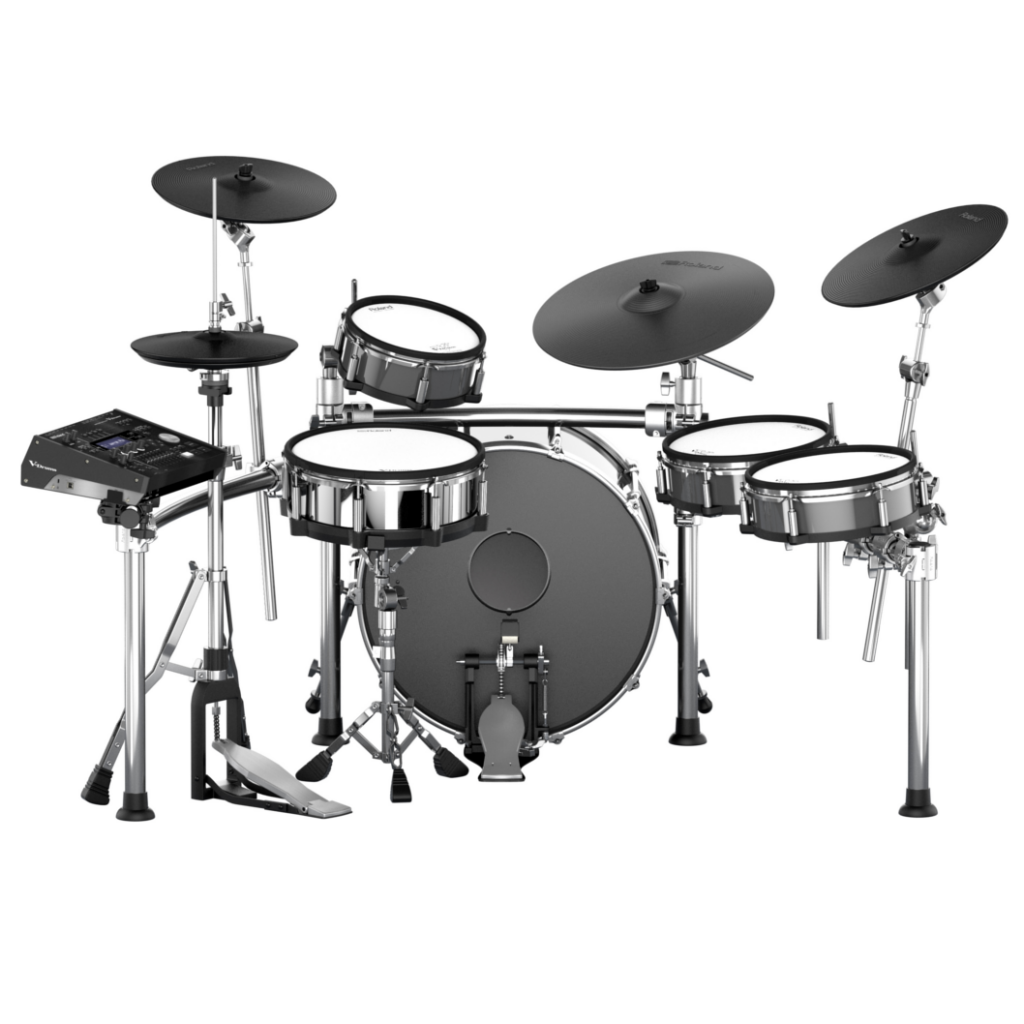 With regard to digital drums’ advantages over acoustic drums, Armentrout said there are several. “For example,” he began, “immediate access to a wide variety of sounds and kits that fit virtually any musical style, editing and customization of the sounds to the player’s personal taste, volume control, the ability to play with headphones without disturbing others, built-in metronome and practice exercises, recording without the need for microphones, and the ability to connect to a computer to capture MIDI and audio data.” He continued, “Electronic drum kits also have a smaller footprint, which gives them an advantage in the area of portability. And, our patented mesh heads give the end user an acoustic-like feel, with the ability to tension the heads to suit each individual’s taste.”

When it comes to digital drums, Roland’s niche in the market is well established. The company’s V-Drums line has several product offerings, at every price point, suiting players of every level of expertise. Thanks to those diverse offerings, Roland has become highly regarded as a premier digital drum brand, and the company’s many innovations in digital drums since the late 1990s have contributed to its reputation as a trendsetter in the digital music-making technology arena. The latest additions to the V-Drums line, the TD-50KV and TD-50K, are poised to solidify that reputation even further.

Although it is hard to surprise consumers with new entries in a well-known, 20-year-old product line, Roland has some tricks up its sleeve with the latest V-Drums models. According to Armentrout, “Effectively, the TD-50 series is the fourth generation of Roland’s V-Drums brand since its introduction in 1997. Further improving the playability, sound quality, interface and innovative design were all part of the goal.” But, in addition to making some overall improvements, the TD-50KV and the TD-50K also feature completely new hardware and software innovations.

Those innovations include the TD-50, an all-new sound module that features a new set of drum sound samples. “One of the goals of this fourth generation of V-Drums was to offer an entirely new sound set,” Armentrout stated. “The TD-50 sound set began with entirely new instrument samples, recorded in major studios by top engineers. The acoustic drum sounds, for example, include sounds from vintage, exotic drums and a wide range of cymbals.” Each individual drum pad features its own compressor and three-band EQ, and specific drums can be treated with three independent multi-effects. A multi-band compressor and four-band equalizer are used for final processing on the entire kit, and the new Snapshot feature allows users to save and compare sound edits to the current kit temporarily before actually saving edits to kit memory. 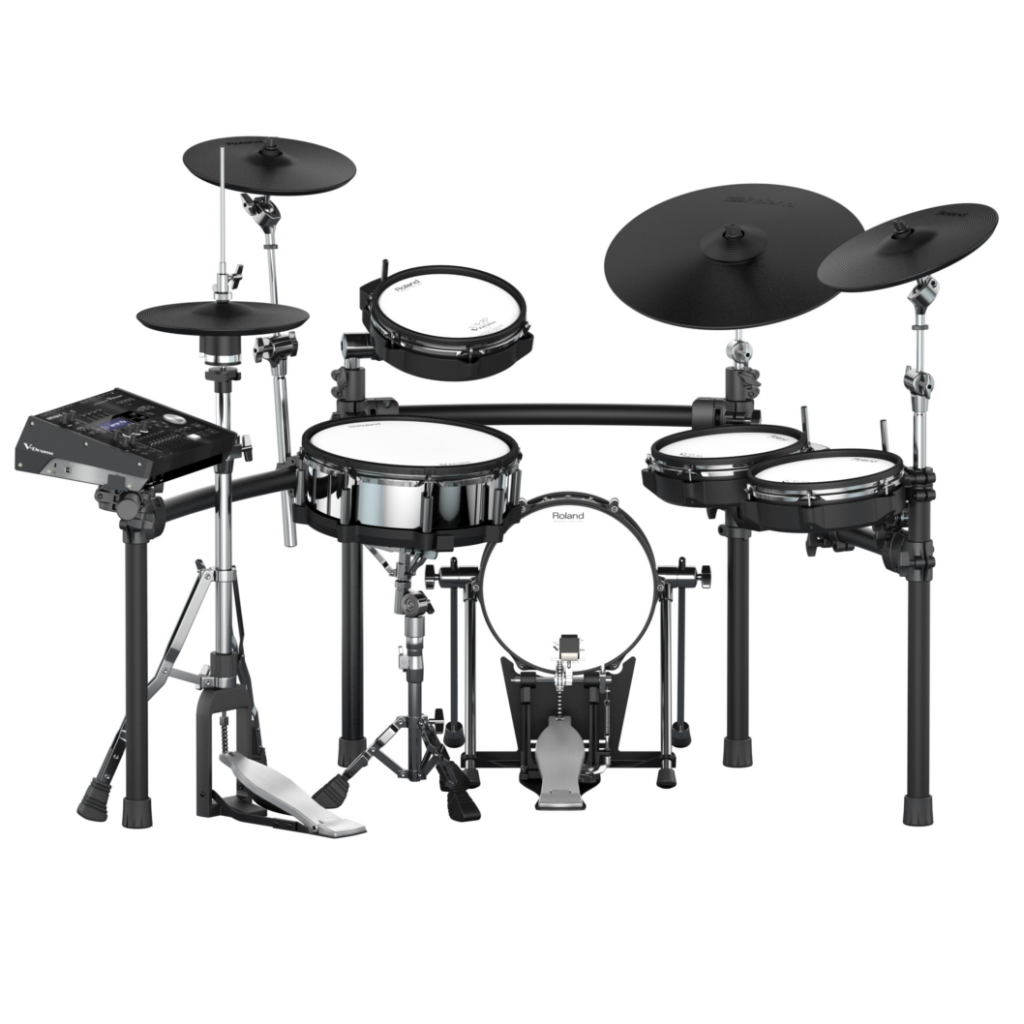 The TD-50 also features Prismatic Sound Modeling, which enables unprecedented customization of instruments. “Customization options include shell depth, head type, tuning, muffling, mic position, transient, width of snare wires, resonance, cymbal size, thickness, cymbal muffling and more,” Armentrout offered. “There is also a layering function, which allows the user to layer and adjust a sub-instrument along with the primary instrument. This includes user-provided WAV files that can be loaded into the TD-50.”

The ability to load WAV files into the TD-50KV and TD-50K’s sound module via SDHC card marks a first for the V-Drums line. “Compatible files are 44.1-kilohertz, 16- to 24-bit WAV files,” Armentrout explained. “These samples can then be assigned to any surface within a kit, as well as being used as a sub-instrument using the layer function. SDHC up to 32 gigabytes can also be used to back up and reload any parameter on the module, so that your changes are saved. You can also play WAV and MP3 files directly from the SD card.” He continued, “USB supports both MIDI and up to 10 tracks of digital audio for multi-track recording on a DAW. The operation is fairly simple; with the proper driver installed, it is simply a matter of connecting of the TD-50 module to the computer, then adjusting input and output destinations and levels, and launching your DAW software.”

With regard to hardware, the TD-50KV and TD-50K include some intriguing new offerings. “The PD-140DS Digital Snare and CY-140DR Digital Ride use Roland’s multi-sensor technology for even more expressive playability than before,” Armentrout commented. “The PD-140DS Digital Snare features a 14-inch-diameter shell with a triple-ply mesh head. The multi-sensor technology allows seamless tonal variations across the entire surface of the head, and traditional cross-stick technique can be used effortlessly, without removing the hand from the head. In short, this snare pad responds to every playing nuance of an acoustic snare.”

In addition to the snare pad, Roland has also developed a game-changing digital ride cymbal. “The CY-18DR Digital Ride is 18 inches in diameter, it has a large bell, and it has the weight and movement properties of acoustic ride cymbals,” Armentrout explained. “The bell is larger, and the multi-sensor design allows seamless tonal transitions as the stick moves across the bow. The ride features three-way triggering, edge, bow and bell, and it includes both a choke and mute function. Most of the players who have tried it say it’s the best-feeling, best-playing electronic cymbal they’ve ever played.”