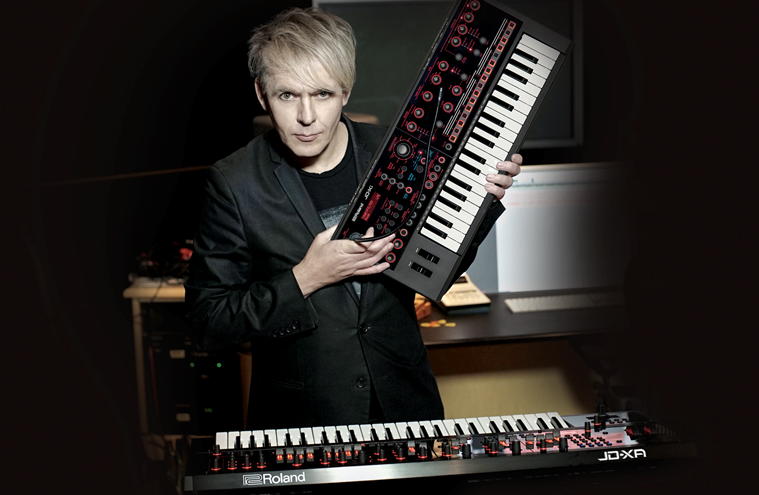 StaffJanuary 22, 2021
During NAMM’s virtual Believe in Music Week, Roland presented its sixth annual Lifetime Achievement Award to the founding member and keyboardist of Duran Duran, Nick Rhodes, who has had a storied career spanning four decades. The Roland Lifetime Achievement Award recognizes individuals for their invaluable contributions to the music industry while using Roland gear throughout their careers. Roland and BOSS’ global network of influencers now reaches more than 1,000 artists with a collective social reach exceeding 1 billion.
Gordon Raison, director, CMO and CSO, Roland Corporation, presented acclaimed musician, songwriter and producer Nick Rhodes with the Roland Lifetime Achievement Award. Best known as one of the driving forces behind the British band Duran Duran, Rhodes formed the group at 16 alongside bassist John Taylor. Known for his experimentation with analog synthesizers, Rhodes has a career spanning more than 40 years and resulting in 21 singles on the US Billboard Hot 100, more than 100 million records sold and innumerable GRAMMY, BRIT, MTV and Ivor Novello awards.
Artists from around the world celebrated Rhodes during the award presentation, including personal congratulations from Mike Garson, Jimmy Jam, Ben Folds, Giorgio Moroder, and many more. Raison also highlighted Rhodes’ instrumental role in making Roland a household name and praised how Rhodes’ “unique creativity, by shaping sounds without compromising melody, has resulted in songs and productions that will live on forever in the very fabric of popular culture.”
Roland Vice President of Global Artist and Influencer Relations Brian Alli added, “Nick represents so many things that we believe in as a company. He started as a kid with a dream. He and his best friend go out and chase that dream, and here we are 40 years later celebrating.” Alli continued, “Nick’s passion has been fueled by a mix of fashion, art, technology, film, and photography, and the strong influence of these different areas can be seen throughout the years, throughout their music, their legendary videos, and even this week with the release of their latest song cover – ‘Five Years,’ a tribute to David Bowie.”
Click here for more of the Music & Sound Retailer’s CTV @ Believe In Music Week coverage.