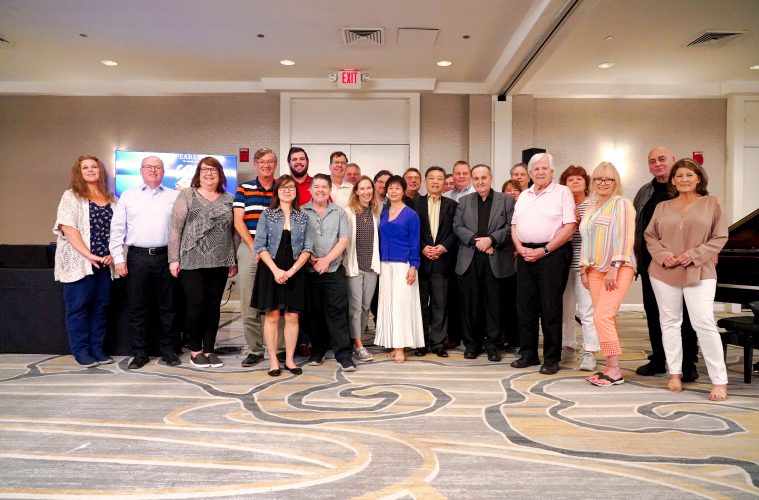 The three-day event was hosted by Leng Tshua, global sales and marketing director, Guangzhou Pearl River Piano Group; Jeff and Fritz Tasch, owners of Grand Piano Haus; and Peter Giles, president, Giles Communications. It served as the launch pad to unveil an entirely new strategic approach being taken in the U.S. by Pearl River, the world’s largest piano manufacturer and best-selling piano brand globally, as well as one of the most prestigious names in the piano industry.

For the first time in more than a decade, the China-based Pearl River Piano Group is establishing direct relationships with U.S. piano dealers to enhance customer service significantly and streamline order processing to reinvigorate the retail piano marketplace.

Key to Pearl River’s approach is a highly competitive, industry-leading wholesale price structure for dealers who purchase directly from Pearl River’s Guangzhou factory. Additionally, the company is setting up a distribution facility in the United States for those dealers who desire great flexibility in filling in their inventory a la carte.

But perhaps most important, Pearl River’s new approach makes available a large number of Pearl River models that have been widely embraced throughout the world for years but have previously not been offered to U.S. dealers and their customers until now.

Pearl River is also significantly enhancing its U.S. marketing and branding campaigns in the coming months. The company has already invested considerable time building three comprehensive websites— www.pearlriverusa.com, www.ritmullerusa.com and www.kayserburgusa.com – to provide dealers and consumers alike with a deeper understanding of the company’s extensive and profitable product lineup, as well as its commitment to the U.S. market and to providing the highest quality instruments at affordable prices. In addition, a comprehensive program of online advertising and point of purchase branding will give even greater support to dealers to drive in-store traffic and sales.

“This is the beginning of a new journey for Pearl River,” said Tshua. “We believe that our new approach is game-changing in the piano industry and are very grateful to the growing number of dealers who have agreed to represent Pearl River in their respective markets fully.”

The conference kicked off Thursday evening with a guest keynote address by Terry Lewis, who had previously served as executive vice president for Yamaha Corp. of America before starting his own business consulting firm, International Business Resources, in 2008.

“I first visited the Pearl River factory in Guangzhou in 1997 during its successful partnership with Yamaha at that time,” said Lewis. “I am deeply impressed with how much the company has achieved since then, both in the quality of Pearl River products and the fact that the company has become the world’s largest piano maker. The addition of the high-end Kayserburg and the Ritmüller lines is already challenging the better-known elite brands and are certain to gain even wider acceptance by artists, conservatories and the luxury consumer market alike. I believe that Pearl River’s strong and renewed commitment to the U.S. market will be a big success.”

The evening festivities concluded with an electrifying performance by pianist Ed Vodicka performing on the Kayserburg KA-180 grand piano. He was joined by bassist Scott Mason, who is also head of jazz and contemporary music studies at Roosevelt University, and drummer Paul Wertico, associate professor of jazz studies at Roosevelt University and former drummer for the Pat Metheny Group.

Friday morning’s session opened with a presentation by Giles, who provided attendees with a detailed understanding of Pearl River’s history, its early decision to embrace and refine European piano standards, unwavering commitment to quality control and craftsmanship, as well as its global support to the artistic community.

“Pearl River has remained highly successful around the globe for more than 60 years, and its pianos are the best-selling in the world, whether they are destined for the home, for schools or the concert stage,” said Giles, a 30-year veteran of the music products industry, having managed PR campaigns for Yamaha, Casio and NAMM, as well as countless programs for piano dealers. “Pearl River is highly determined to bring this success to the United States so that dealers here can enjoy the same extraordinary levels of success that dealers around the globe are experiencing.”