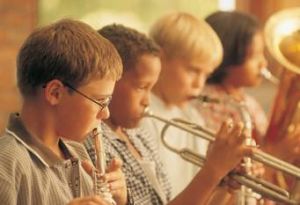 The NAMM Foundation will support a new initiative led by the President’s Committee on the Arts and the Humanities and developed in cooperation with the U.S. Department of Education and the White House Domestic Policy Council. The Turnaround Arts initiative launched in Washington DC will work to turn around low-performing schools with strategies that expand access to comprehensive music and arts education as part of the core curriculum.

The Turnaround Arts initiative, announced by the committee’s co-chairs, George Stevens Jr. and Margo Lion, is a new public-private partnership designed to narrow the achievement gap and increase student engagement through the arts. Working in some of the nation’s lowest-performing elementary and middle schools, this program will test the hypothesis that high-quality and integrated arts education boosts academic achievement, motivates student learning and improves school culture in the context of overall school reform.

The NAMM Foundation, which seeks to strengthen music education in schools and communities nationwide through its SupportMusic Coalition, has supported numerous projects exploring the impact of active music making during various stages of life. NAMM’s research has consistently shown a positive relationship between arts education and overall student achievement, supporting the initial White House findings.

Over the last year-and-a-half, the White House has turned to the NAMM Foundation for current music research, advocacy support for the initiative and ideas on how best to structure the program. NAMM members in the test communities will be shown ways to engage in and support the initiative on the local level. On a national scale, NAMM will help in procuring additional musical instruments for the test community schools.

“This initiative is a crucial step in supporting the NAMM Foundation’s ongoing efforts to increase active participation in music making among school-aged children,” said Mary Luehrsen, Executive Director of the NAMM Foundation. “Now working with the White House, we can tap into NAMM’s extensive arts education research and our vast member knowledge base to ensure that these schools see a marked improvement, helping to prove that the initiative is a success.”