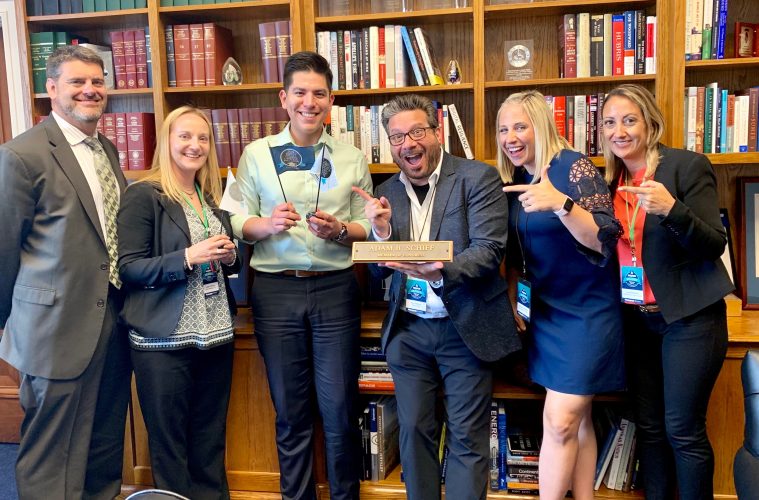 NAMM advocates from California on Capitol Hill in 2019.

In what NAMM hopes is the last virtual event of any kind it will host, the trade group on May 25 presented its NAMM Advocacy Summit event, formerly called the NAMM Advocacy Fly-In, over Zoom. Traditionally, approximately 100 NAMM delegates take to Washington, D.C., to speak to members of the U.S. House of Representatives, the Senate, governors and their staffs. Although it is difficult to replicate the in-person experience on Capitol Hill, the four-hour event, for which there were more than 700 registrants, provided plenty of good information and fun, and even included a cameo appearance from music education champion and former New York Yankee superstar Bernie Williams.

As is the case each year, NAMM presented its “asks” of politicians, or what the MI industry seeks to achieve. This year, a key ask is fully funding the Every Student Succeeds Act (ESSA), Title IV, Part A to state and local school districts to expand access to well-rounded subjects, specifically including music and the arts. Fiscal year 2021 funding for this stands at $1.22 billion, however, fully authorized funding of $1.65 billion is “necessary to ensure that the well-rounded goals of ESSA are realized for every child.”

Also, the “ask” requests support of ESSA’s Title I “funding for our nation’s most vulnerable children and Title II funding that promotes the effectiveness of our teachers; fulfill the intent of the law with authorized funding.”

Prior to making this ask however, NAMM suggests its advocacy members thank their politicians first. NAMM offered these words for what advocates could write to their politicians: “Thank you for your leadership through the pandemic and your ongoing commitment to address the challenges, needed changes and opportunities for our country. [We thank you] for the pandemic-related emergency assistance to states and local communities for education so that every child in our country receives the needed resources and support from schools and communities for their education and development needs.”

NAMM also suggests advocates share with their constituents peer-reviewed research concerning mitigation protocols for in-person music learning as children return to school and sign or support the “Arts ARE Education” pledge supporting the arts as important to student well-being in this and all times, as well as share this support on their website and constituent outreach. This pledge asserts that the arts are “part of a balanced education and asks signees to commit to supporting equitable access to arts education that includes instruction in all arts areas.”

The final NAMM Advocacy Summit “ask” is for politicians to authorize funding for the National Endowment for the Arts that provides competitive grants in every state and congressional district for national arts and culture organizations.

To get NAMM advocates inspired, NAMM dialed up speeches from several heavy hitters, including a keynote speech from Arne Duncan, former U.S. Secretary of Education and current managing partner of Emerson Collective. Duncan recalled growing up in a household where both his parents were devoted to music. He talked about growing up in a poor neighborhood and the inequities seen in America. “Talent is evenly distributed,” he said. “Opportunity is not.”

Duncan added that music education should be considered a core activity and no longer carry the stigma as being “extracurricular.” “The idea that music is extracurricular [makes no sense],” he said. “It has to be the norm [in schools]. Not the exception.”

Losing music and arts education for many students during the COVID-19 pandemic extolled a huge toll, Duncan noted. “We need make opportunities available for every child,” he asserted. “That is what we have to fight for.”

Following these powerful words, the conversation shifted to whom Duncan admires most, as well as leadership advice. First on his list for those he admires is former U.S. Secretary of Education Richard Reilly, whom himself has often appeared on Capitol Hill with NAMM members to help take up the fight for music education. “I really look up to him for his compassion and balance” said Duncan.

The former Secretary of Education next mentioned Martin Luther King and Barack Obama, with whom he remains friends. Duncan acknowledged that he no longer plays basketball with Obama, because his home is in Chicago, while Obama now lives in Washington D.C. However, he does play basketball in Chicago nearly every morning.

Regarding being a great leader, Duncan said what is most important is what comes from the heart: passion. “My parents pursued their passion of music collectively for more than 40 years and they made a difference,” he said.

Duncan added that being a great leader requires building a top-notch team comprising the strongest, most diverse individuals. “I want people who tell me the truth. Not what I want to hear,” relayed Duncan. “You might not want to hear it, but you need to hear it.

The managing partner made sure to also call out music educators, whom he said not just teach music, but touch souls. “Creativity, heart and compassion of teachers have been remarkable with a lot of fear and uncertainty at home during the pandemic,” he said.

Duncan concluded with these words: “Music educators: thanks for helping to change lives.”

For the entire NAMM Advocacy Summit story featuring much more coverage, see the July issue of the Music & Sound Retailer.

For more features from the Music & Sound Retailer, click here.