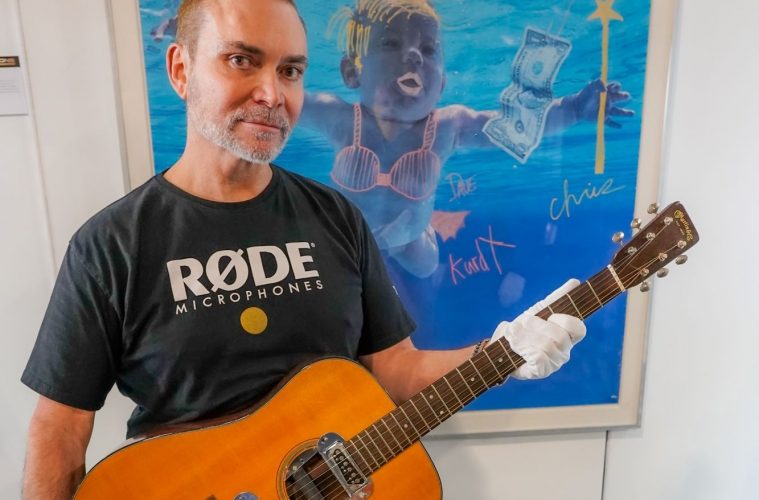 Peter Freedman holds the C.F. Martin guitar that Kurt Cobain played on "MTV Unplugged," for which he paid $6.01 million.

Despite the world suffering from a pandemic, the MI auction market has likely never been hotter, Martin Nolan, executive director of Culver City, Calif.’s Julien’s Auctions, told the Music & Sound Retailer. “People want an escape from the harsh reality we are in right now. … People are also stress shopping. Every store was closed,” he said. “Then, there is the element that the stock market has been so volatile this year. People are saying, ‘Let’s diversify. Let’s buy something. Let’s get something iconic. I deserve this. I am going through a pandemic. I need to acknowledge this. I need to reflect on where I am in life.’ People are at the point where they have disposable income and they want to splurge more. They are not traveling. They are not buying an expensive watch. They may not be buying an expensive car. They see something in an auction that is cool and a great conversation piece. We are all nostalgic. We all want to reflect back to our youth. We are buying a happier time in our life. We are buying some normalcy. And in years to come, we are owning something that will likely appreciate in value.”

Nolan knows firsthand. He was a key component of the June 20 sale of Kurt Cobain’s 1959 C.F. Martin 18-E that was played on the famous 1993 “MTV Unplugged” performance for $6.01 million. “This is the highest price paid not only for a guitar but for any item of memorabilia,” said Nolan. “We were the first auction house to sell a guitar for more than a million dollars. That was John Lennon’s J1 60E that was stolen or taken from him at a Beatles Christmas show in 1963. Nobody knew where it was until we were contacted in early 2015 that a person unknowingly might have the guitar. So, we went on a whole journey of authenticating and researching it. We even had to work with Yoko Ono, because she was the rightful owner of the guitar. We sold it for $2.4 million, then a world record. Half the money went to John and Yoko’s charity as part of the settlement.”

On June 20, 2019, Dave Gilmour sold his black Fender Stratocaster $3.9 million, setting a new world record. Exactly one year later, the Cobain guitar was sold to Röde Microphones founder Peter Freedman. “He is a great guy and a long-time client of ours, stated Nolan of Freedman. “He has a special affinity for the [Cobain] guitar and decided he would go after it.”

Julien’s Auctions had expected the Cobain guitar to sell for between $1 million and $2 million. Nolan said he was on “cloud nine” when seeing the final selling price more than $6 million. “We sold the cardigan Kurt wore on “MTV Unplugged” in October for $334,000,” he recalled. “That was a world record for a Cobain item or cardigan. When we priced the Cobain guitar, we figured it would sell for three times the cardigan sold for. But I believed it could sell for 10 times the cardigan. I believed it could reach a new world record. But I never had any inkling we could break $6 million. It was just incredible. … It was even more exciting because it was the first time during the pandemic we had bidders in the room, socially distancing of course.”

The Cobain guitar is even more fascinating considering there is a story beyond the MTV performance. Nolan recited its history. “Kurt and [wife] Courtney [Love] went into [Hollywood’s] Voltage Guitars. Lloyd Chiate, still the owner of the store, would go around the country sourcing guitars. He bought the Martin guitar in the early 1990s, in a dingy guitar shop in either Mississippi or Alabama for $3,500. There were only 302 of the guitar made. This was No. 7. [Chiate] brought it back to his shop. Kurt Cobain came into the store looking for a Martin guitar. He wanted a left-handed guitar and there was an easy transfer from right to left with Martin guitars. [Chiate] sold it to Kurt and a pregnant Courtney for $5,000, a nice markup for a guitar in the early 1990s.”

Chiate came to Julien’s Auction’s showroom before the auction finalized. “He looked at the guitar,” recalled Nolan. “There were two scratch marks. He said, ‘Those are still there. Those were there when I sold it to Kurt.’”

Chiate returned to Julien’s on the final day of the auction. He and Freedman had the opportunity to meet and take a photo together with the Martin guitar. “That was history changing hands,” said Nolan. “That was truly incredible.”

Nolan stressed the market for musical instruments is not only hot at the high end in terms of price. Lower-price models under $100,000 are also seeing plenty of sales. “There is strength across the board,” he responded. “And the sale of the Cobain guitar raised the benchmark for musical instruments. Before we sold the [Lennon] guitar for $2.4 million, there was a resistance for people to pay more than $1 million for any musical instrument. We smashed that glass ceiling. … We have raised the bar. Values have gone up. People are willing to spend on these items.”

The market for musical instruments will remain hot even if the COVID-19 pandemic passes, when people will have more options to spend their money on, such as travel and sporting events, Nolan told the Retailer with confidence. “This is going to be our best year in the [auction] business,” he said. “That is partly because people who have felt guilty about buying a collectible item are saying, ‘what the heck?’ But also, people are seeing these items as investments. A good example is the [Kurt Cobain] cardigan I mentioned. We sold that in 2015 for $117,000. The buyer of that cardigan brought it back to us four years later and we doubled his money. There is definitely a trend. We are seeing interest and demand and people keep coming back for more and are paying higher prices.”

Nolan’s biggest challenge now is to find a memorabilia item, music-related or not, that can top the $6.01 million earned for the Cobain guitar. “I am thinking about that,” concluded Nolan. “I am really pleased that Kurt Cobain, someone I have so much love for, set the record. I am looking for the next [great item]. Clearly, there is demand. People lined up to bid for the Cobain guitar. And that was with the knowledge that we already had a $1 million bid for the guitar before we opened the auction. The news about the guitar’s sale have gone worldwide. People are stunned and amazed, but loving it.”