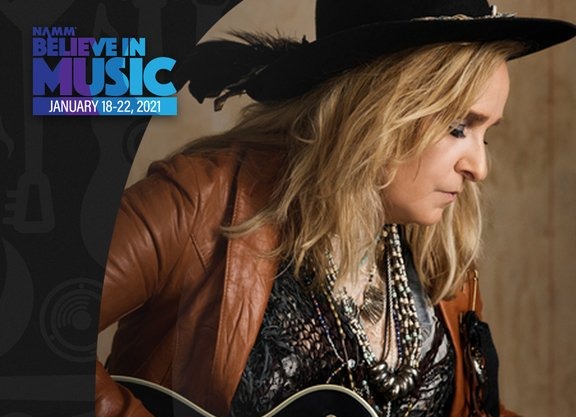 Grammy- and Academy-award winner Melissa Etheridge on Jan. 22 received NAMM’s 2021 Music for Life award during Believe in Music Week. Etheridge follows Garth Brooks, who also was honored with the coveted award a day prior. Upon acceptance of the award, Etheridge discussed a number of topics, including Etheridge TV.

“When the pandemic started, I decided I wanted to do a free concert every day until it ended, thinking it would not last that long,” Etheridge said. “That stopped in May when my son passed away.”

Etheridge, along with wife Linda Wallem, a producer and writer for TV shows such as “Nurse Jackie” and “That ‘70s Show,” decided to create Etheridge TV, a paid subscription service. “Five days a week we bring music to my fans,” said Etheridge. “We make music three days a week, have chats one day and on Friday, we show old bootlegs of past concerts.”

Etheridge has even performed live concerts where 20 to 40 people applaud for her from a separate location. This model has proven effective enough that Etheridge is looking into livestreaming her concerts post-pandemic in an effort to reach fans in countries in which she never tours. However, Etheridge acknowledged livestreaming technology needs a lot of improvements. “We cannot replicate the experience of everyone together. A lot needs to be done to make streaming better.”

The Grammy-winner was also asked about her childhood growing up in Leavenworth, Kans., and about her musical influences there. She recalled getting her first guitar at 8 years old and visiting both Urban Music Store and Tune Shop. “My first live concert was Buck Owens,” relayed Etheridge. “He was amazing.”

Lastly, Etheridge was asked about her widely acclaimed version of Janis Joplin’s “Piece of My Heart” that she performed with Joss Stone at the 2005 Grammy awards. Etheridge recalled receiving a chemotherapy treatment for cancer the morning of the performance and the warm reception she received from fellow musicians. “That is one of my top performances I ever did,” she said.

“We have a gift. The gift needs to be given,” Etheridge stated. “I am blessed to share it.”

Etheridge concluded with a version of her hit song “Come to My Window.”