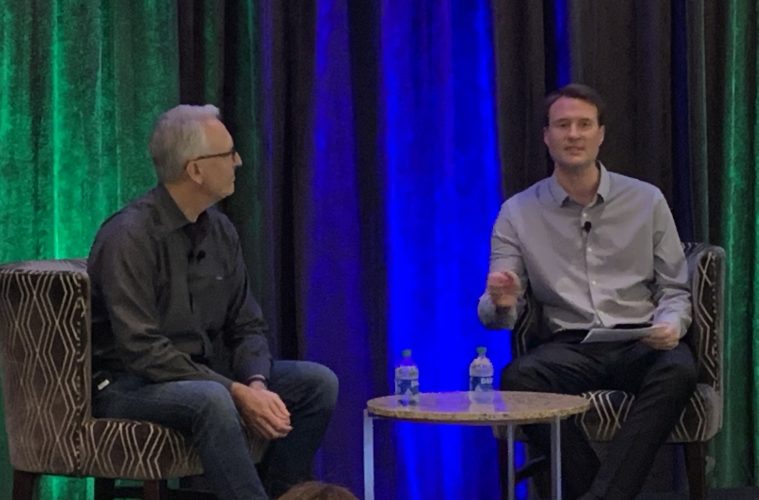 In his first in-person interview since the beginning of the pandemic, NAMM president and CEO Joe Lamond on July 13 spoke at the National Association of School Music Dealers (NASMD) meeting to offer his take on leadership. He first remarked that he highly respected people who appeared at the event.

“We could not be here last year,” he said at the Hilton Nashville Downtown. “A lot has changed since then, but it took a lot of bravery to be here.”

Lamond reflected back to a year ago, when NAMM had to cancel The NAMM Show for the first time since World War II. “First you have to get your ego out of the way about how bad it is to cancel the show,” he recalled. “But then you realize this is going to happen. We then proceeded to get everyone back their money instantly and make sure we took care of all of our members.”

Once the decision was made to cancel the show, Lamond said NAMM quickly pivoted to hosting a virtual show, something he acknowledged it had no knowledge or experience of, nor any financial budget. “When we shut down the winter show, it was a loss of 90 percent of our revenue,” he said. “Always make sure you can recover if you have something catastrophic happen.”

NAMM’s president and CEO equated the experience to flying an airplane. “In a plane, altitude is your friend,” he stated. “I use the analogy that if both of your engines go out, you want to be 10,000 feet in the air. I don’t want to be at 1,000 feet. I want to have plenty of time to look for a safe place to land. The altitude for us was to make the right decisions at the right moments and know that we will live to fight another day.”

Early on in the pandemic, news headlines were scary and if you watched them often, “you were often led down wrong places,” stated Lamond. “The media was seldom right, but never in doubt. I heard there will never be live events again. There will never be a reason to go to trade show again. To believe that, I would have to believe that 8,000 years of human experience had suddenly changed. I would have to believe people would not want to come together for trade. … I figured some of these things could be true, but not all of them are true. This setting is the perfect example. We all came together in Nashville not because we had to. It was something we chose to do. I banked on human nature probably being unchanged post-COVID.”

Leadership involves excellent planning, and NAMM has long-term plans regarding how The NAMM Show could grow. But COVID-19 threw those plans out the window. “What did Mike Tyson say? ‘Everyone has a plan until they get punched in the mouth,’” relayed Lamond. “Right now, our goal is to get through the next phase.”

Lamond offered an analogy of martial artists often “doing their thing” and acting on instinct. However, Bruce Lee would continually assess a situation and adjust to it. “That’s what we need to do,” he said. “We have seen lots of challenges in my time in the music industry. I expect we will see a lot more of them.”

One positive the pandemic has brought MI retailers is the ability to handle crisis management. “I think everyone now has a master’s if not a Ph.D. in crisis management,” concluded Lamond. “I can picture someone coming into your office in the future and saying, ‘There is a huge crisis. We have a big problem.’ You will say, crisis? Sit down. I will tell you what a real crisis is.”