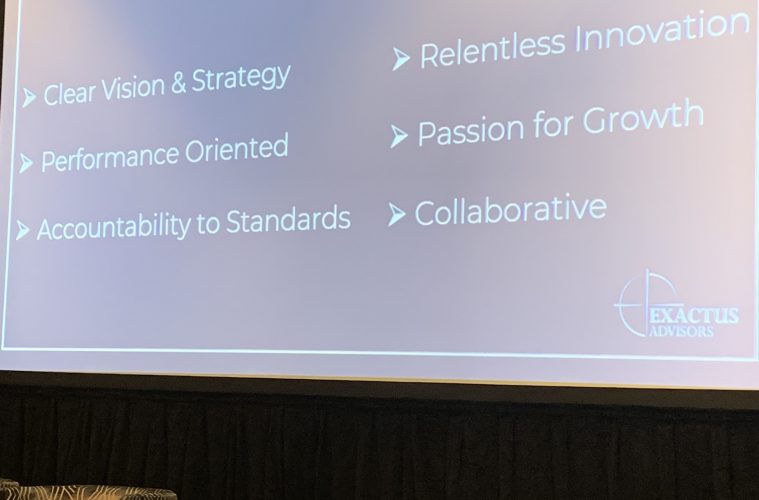 Jimmy Blackmon, who has led high-risk military missions all around the world, including serving as the air mission commander on the operation that netted No. 2 and No. 3 in the “Iraqi Deck of Cards,” on July 13 delivered the closing keynote session at the National Association of School Music Dealers (NASMD) show at the Hilton Nashville Downtown.

Blackmon spoke in-depth about his highly dangerous combat missions and then correlated what he learned on these missions to the business world. He called today “The Age of Disruption” and acknowledged there is one big problem: an ability to prepare for the competition, something that provided a huge advantage in the past, is gone.

“In the Cold War, we had all the knowns. We knew the enemy was the Soviet Union,” said Blackmon. “We knew the size of their army. We knew their GDP (Gross Domestic Product). We knew the budget that they gave to defense. We knew their ‘big seven’ weapons systems. We knew we were going to fight them in the plains of Eastern Europe.

“If you have all the knowns, you can create a strategy for overmatch,” he added. “If I know how many competitors I have in business; how many shifts they have, how many employees they have and what their margins are and the markets they are in, I can create a strategy to beat them. But we do not have those knowns anymore. So, we have to fundamentally change the way we define the environment.”

One thing business owners cannot do is predict the future because everyone is terrible at it, Blackmon stressed. The unknowns always change. The environment always changes. “We have to align to a common purpose and vision and we have to understand talent, potential, maturity and judgement of everyone on the team. And the smaller you are, the more important it is,” he said. “If you have 20,000 employees, you can afford to have a bad day. If you have 12, you better get it right.”

One mistake businesses make is promoting employees due to performance, as opposed to demonstrated potential for increased responsibility. “If you do the latter, you are a global unicorn,” asserted Blackmon. “People promote because someone did a good job and they say they can do another job. So, they promote to incompetence. It is alive and well at every business out there. There are a lot of ways to promote performance, but we have to ask, what are the skill sets required for this job? Then, pick the people based on the skill sets required. Instead, we encourage incompetence day in and day out. You have to optimize the potential of your organization.”

Blackmon offered examples of businesses who have gotten it right and ones who have gotten it wrong in terms of business strategy. He started with a company who got it wrong: Nokia. “They are an engineering company that made the best phone out there,” noted Blackmon. “They were so good that in 2007, they owned 46.8 percent of the market. What happened in 2007? Steve Jobs walked across a stage and pulled an iPhone out of his pocket. But Nokia had a strategy for the long term. They said they made the best device and that will win the day. In 2010, Nokia owned 23 percent of the market and still did not hire one software engineer. They did not get it was not about the phone, but the apps. In 2012, they owned 2.8 percent of the market share and Microsoft bought them at a bargain. Nokia’s CEO Stephen Elop’s famous quote was, ‘We didn’t do anything wrong, but somehow, we lost.’”

Blackmon offered Blockbuster Video, BlackBerry and Kodak as other companies that failed to innovate correctly. “Getting ideas right and constantly innovating is vitally important,” he said. “If you get caught on your heels, you are going to get outmaneuvered. That is true in pretty much every industry because things are changing quickly.”

On the other side, Blackmon offered up Intuit as a company that made the right strategic moves. “They did not originally brand themselves as Intuit. You and I knew them as Quicken, TurboTax and QuickBooks,” Blackmon said. “But they transitioned their programs from desktop software to the cloud. They went from a closed platform to an open platform. You want to talk about risk? You’re talking about people’s finances here and you are going to let third-party companies have access to their apps? Absolutely, because it is essential for reaching the objectives they had. Intuit went from a North American company to a global company. They rebranded, sold off Quicken, and every year since 2007, they have maintained a 12.6 percent annual growth rate. If that is not enough for you, they are Fortune World’s Most Admirable Company to Work For 14 years in a row.”

The closing-session speech closed with interesting anecdotes, as well as a discussion of the characteristics of successful 21st century companies. Blackmon said these successful companies share six characteristics: a clear vision and strategy, performance oriented, accountability to standards, relentless innovation, passion for growth and collaborative.

Regarding a clear vision and strategy, “Have a vision,” stated Blackmon. “What do we look like today? What are we going to look like in five years? What are the milestones we need to reach to get to where we want to be, knowing we will have to adapt along the way?”

Performance oriented refers to measuring objectives and key results. Accountability and standards means the company on a daily basis lives up to what it says it is going to be. And regarding relentless innovation, passion for growth and collaborative, Blackmon said as companies scale, they need to expect to face complex challenges and know how to overcome them.