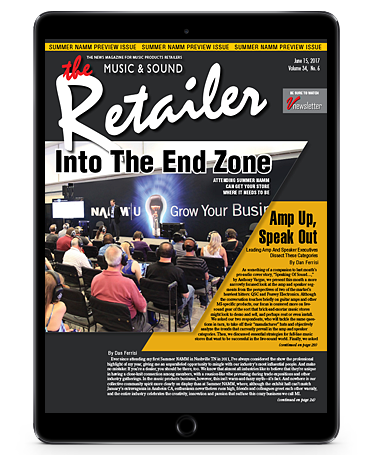 Into The End Zone

In the music products industry, our close-knit connection isn’t warm-and-fuzzy myth—it’s fact. And nowhere is our collective community spirit more clearly on display than at Summer NAMM, where, although the exhibit hall can’t match January’s extravaganza in Anaheim CA, enthusiasm nevertheless runs high. Friends and colleagues greet each other warmly, and invaluable networking and training take place.

Amp Up, Speak Out

As something of a companion to last month’s pro-audio cover story, “Speaking Of Sound…,” by Anthony Vargas, we present this month a more narrowly focused look at the amp and speaker segments from the perspectives of two of the market’s heaviest hitters: QSC’s Ray van Straten and Peavey Electronics’ Fred Poole.

Somewhat rare in the music products industry are companies that boast equal strength on the manufacturing and distribution sides, let alone with brands whose names are iconic and widely respected in musician circles. Korg USA is in that small group. We sit down with company leader Joe Castronovo this month.

For decades, Austin TX has been known for its uncanny ability to be the hippest spot for most types of music. It’s almost like there’s a vortex that sucks musical talent into the city limits. This month, however, that vortex must be on the fritz, because it’s sucked in our resident super sleuth, who’s searching high and low for guitar amps.

Special To The Retailer

Attracting more people to music and involving them in it is the dream for most music store owners, right? Well, if you haven’t considered cultivating programs for beginner musicians of a mature age, you’re probably missing out.

The ideal new revenue stream produces revenue for your store while requiring no financial stake on your part. Yes, no-risk revenue is the first cousin of unicorns and leprechauns. However, it can be achieved.

Confessions Of A Retailer

Continuing in the “Keepin’ It 100” vein, Donovan Bankhead reveals some of the things he worked on to turn himself around and embark on the journey to become the leader his employees and his business deserve.

At Wentworth Music, in the heart of British Columbia, Canada, Noel Wentworth is making musical dreams come true. That’s been his goal, and his job, since opening the Wentworth Music Education Centre in 2004.

Most independent music stores are searching for ways to wring dollars of margin out of each and every sale. Accordingly, many brick-and-mortar retailers try to maximize their profits by selling used instruments and other equipment.

People choose to visit a physical store; it’s no longer the default option. The shopping environment we create, along with our offering of goods and services, determines whether we make the list and, crucially, how often consumers visit.

Peavey’s first entry into the speaker and sound-reinforcement arena was with its field-replaceable Black Widow speakers. The company continues today with the release of the 1,500-watt RBN 112 speaker enclosures and RBN 215 powered subwoofers.