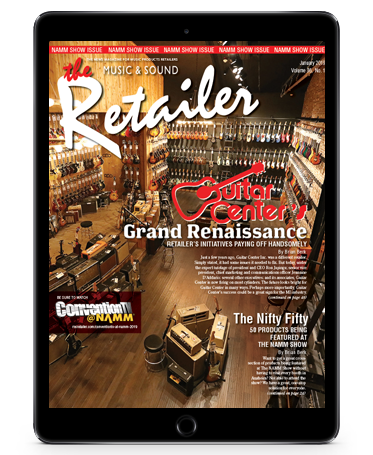 MI’s largest retailer has had an incredible recent turnaround. We get an exclusive scoop from CEO Ron Japinga and senior vice president, chief marketing and communications officer, Jeannine D’Addario.

Looking for all the latest product launches at NAMM? You’ve come to the right place. Here are 50 for you.

Ravi on the Record

Former columnist for the retailer, Ravi, returns for a special cameo article to pay tribute to a retailer we recently lost.

Tom Sumner was named president of Yamaha Corp. of America on April 1. This is the first time that the world’s largest musical instrument manufacturer, Yamaha Corp., has named an American executive to the top position in the United States. We asked Sumner what that means to him, how his tenure has gone thus far and much more.

A couple of months back, we took a look at Ossining, N.Y.-based Mike Risko Music. Now, the Women’s International Network conducted an interview with Miriam Risko, for whom music is truly in her blood.

We wrap up the editorial portion of our January NAMM issue with an interview with Justin Norvell, executive vice president, Fender Products, a Kurt Vonnegut fan who is a completely self-taught guitarist. Find out who his greatest influence is and much more.

In our first of two “Under the Hood” articles this month, we take an in-depth look at Audinate’s Dante AVIO Series.

Tips From the Teacher

Confessions of a Retailer

It’s a new year, and Tim Spicer has four resolutions to make it your best year yet.

It’s 2019. The reality is, MI retailers need to have a strong online component, explains Robert Christie.

What is a MAP Holiday? Allen McBroom explains.

A new year is a good time to think about where you are and where you plan on going. Composing a brand message is a simple and effective way to start planning your strategy going forward. By deciding what this message is, you set the tone for your store.

There are plenty of reasons why brick-and-mortar retail still provides plenty of benefits. Dan Vedda explains.