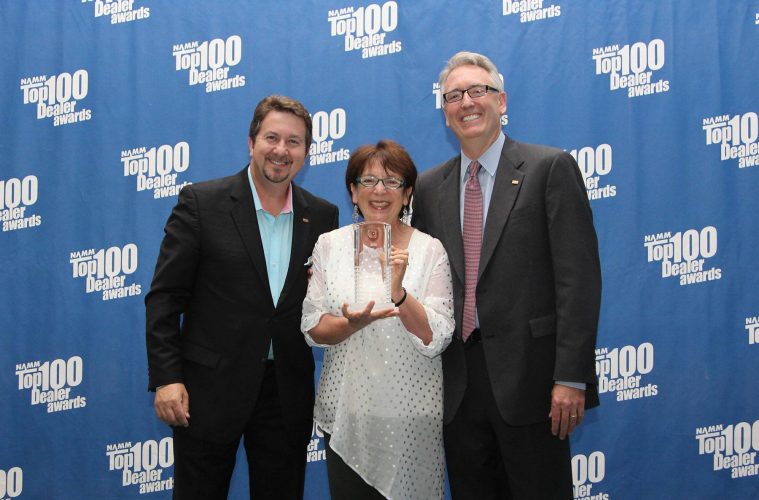 Editor’s Note: “Front and Center” is brought to you by the Women’s International Music Network (The WiMN). The interviews showcase accomplished women who work in the music and audio industries, spotlighting successful female performers, manufacturers, retailers, educators, managers, publicists and others. Visit the wimn.com to view the weekly interviews and to learn more about how to be featured.

For the past 17 years, Myrna Sislen has been the owner of Middle C Music in the Washington, D.C. area. It is a full-service music store serving beginner band students needing instrument rentals or repairs up through experienced musicians looking for guitars or pro-audio microphones, and everyone in between. Sislen is also a classical guitarist who enjoyed a concert career that spanned 30 years and included debut recitals at the Kennedy Center and Carnegie Recital Hall. As an educator, she was an associate professor of music at George Washington University for 29 years, in addition to authoring eight guitar arrangement books.

Sislen has been a female in a traditionally male-dominated field not once, but twice in her career, and many of us can learn a thing or two from her tenacity, resourcefulness and drive. She recently shared some thoughts, advice and recollections about breaking into the field of classical guitar, how she was inspired to take over a failing business that has since been honored three times by the Washington D.C. City Council and some ways she’s encouraged several generations of aspiring musicians in the process.

The Women’s International Music Network: You’ve been a classical guitarist for many years. What initially drew you to learn this type of guitar?

Myrna Sislen: That is a great question. I actually started as a folk guitarist while I was in high school. Lead Belly was my favorite, and I specialized in his music. When I got to American University and started taking applied music lessons on the guitar, learning classical guitar technique and its infinite playing possibilities felt exactly right to me. I was home. I do believe that every musician has certain sensibilities that guide their direction. In my case, I can’t say where it came from, but once I started, that was it. I never questioned the choice; I just went with it.

The WiMN: Having traveled to many countries during your concert career, what are some things you learned about the music industry, being a female in an often male-dominated field?

Sislen: At that time, you could count the number of female classical guitarists on one hand. Although there certainly was some disdain from male guitarists — and sexist comments about how a woman couldn’t possibly play as well as a man — I never let that discourage me. I actually got more concert dates because presenters liked the “novelty” of booking a woman playing classical guitar. Fortunately, that situation has changed dramatically over the years. There are now just as many women classical guitarists concertizing all over the world as there are men.

The WiMN: How did you make the transition from performing artist to music educator? And what skills/experience/education would you recommend for readers looking to possibly teach music?

Sislen: There was never really a transition. Realistically, all musicians have to teach to earn a living. I started teaching while I was studying at American University and didn’t stop until about “412” years later, when I retired as head of the classical guitar department at The George Washington University. For almost every classical musician, teaching and concertizing are not mutually exclusive. I was very lucky to get a university teaching position that not only gave me a W2 form but allowed me to have access to a concert venue at GWU, and a way to make a steady living. My advice for teaching is to use all the techniques you have learned and that work for you and pass those on to your students. I have always felt that everything I learned from my teachers prepared me for teaching. After a certain point, it becomes our responsibility to pass it on and pay it forward.

The WiMN: Before opening Middle C Music, had you ever envisioned yourself as a music store owner, or did the opportunity simply present itself one day and you decided to go for it?

Sislen: How did you know? Actually, that is exactly what happened! I had never aspired to retail, but one Thursday, I was leaving my kickboxing class across the street from Middle C when I ran into another local musician who was working out. He mentioned that the former owner was selling Middle C, and the price was almost nothing. I went immediately to the store to ask, and the actual price was even lower. As I was walking out of the store — and I swear to God, this is exactly what happened — I took one step, and at the second step, something came over me that said, “You have to do something to save this store.” Without knowing anything about running a business, I felt that no one would open another music store, that it would be too hard and too expensive, and that instead it would become another mattress store (for some reason I can’t explain, at that time there were four mattress stores on the block) or a Cingular cell phone store.

Standing outside the store, I called my sister and a friend who said they were not interested in going into business. The former owner had said there was a couple who were interested, but didn’t have any money, so I called them, left a message and waited. They never called back, but a couple of hours later the former owner called me and said someone had just come into the store and that the two of us would be her dream team. I called; he answered within 15 seconds. We met that Saturday, got corporately married the next Tuesday and signed the papers that Friday. Unfortunately — or in reality, it was ultimately fortunate — he didn’t work out, and we separated one year later. That was quite a surprise to me since my experience in music was that you stay together forever. But in business, that almost never happens.

There was quite a learning curve, since I knew nothing about business, but I have always felt that was a plus. If you don’t know the rules, it gives you tremendous freedom to think outside the box, as long as you don’t go into debt and lose everything. Also, being a classical musician is great preparation for being an entrepreneur. As a musician, we are never aware of how much money we make an hour. If we were, we’d go crazy. This is perfect when you own a small business and work pretty much 24/7.

Oh, and did I mention that the former owner had lost $4,000 a month for the previous five years? As our accountant said, “You are buying the Titanic and the ship is sinking.” But she had an amazing inventory, mostly print. The doors opened, and I have not lost one penny in 17 years. So, ultimately, I would say that, metaphorically, the train stopped, the door opened and I got on. That is the choice I made, and I never regretted it … well, almost never. In 2002, only 1 percent of music store owners were women who were not related to a man in the business. It was a challenge. Once again, I found myself in a male-dominated industry, and once again, I was not about to let that fact discourage me.

In the beginning, manufacturers would not talk to or sell to me. Fortunately, I met another woman owner, Liz Reisman of Creative Music in Monroe, Conn., and we formed a two-person buying group. It wasn’t long before we became a force to be reckoned with. And now, women owners in the music industry are a walloping 2 percent.

The WiMN: What are some of the ways you’re attracting and encouraging young people to start (or continue) learning a musical instrument during the school year and during their breaks?

Sislen: The interesting fact for us is that almost half of our 630 students are adults who need just as much — if not more — nurturing and encouragement to start and continue lessons. Adults are even more passionate about creating music than younger people and children. Our goal is to create a place where both older and younger students feel absolutely safe to express themselves when learning to play an instrument. We recognize that it takes courage to expose yourself and your feelings when you take a music lesson. To that end, we have many student recitals during the year, Halloween and holiday recitals, Valentine’s Day recitals, and of course spring recitals. In addition, my favorites are the adult recitals and our family recitals. Teachers also play with students when necessary to help them feel comfortable. In the summer, we have rock band camps and songwriting camps for 10 to 15 year olds. In our rock band camps, we encourage nontraditional instruments like cellos, violins, French horns, flutes, violins and violas.

The WiMN: What are some ways female musicians will feel welcome in your store if they’ve not always felt comfortable walking into other music stores?

Sislen: From the beginning with Middle C Music, I wanted to create a space that was safe, comfortable and nurturing. Of course, selling stuff is always important, but not my paramount goal. If you create a wonderful space, people will come and buy. That has been the case for the last 17 years. As a woman owner, it is natural that women customers and musicians are welcome. It is also expressed in the décor of my store and more importantly in the culture of inclusiveness we all work to create.

The WiMN: Because of your influence on other women in music and the example you’ve set, you’ll be honored at this month’s She Rocks Awards. How are you feeling about that distinction?

Sislen: I can’t express how honored I am to be chosen for a She Rocks Award! My entire career has been one of championing women in music and business. I would like to think I have done this by example, but even more importantly, I have dedicated myself to mentoring, encouraging, sharing ideas and being there for other women in the music industry. And yes, to show the men that we are their equals.