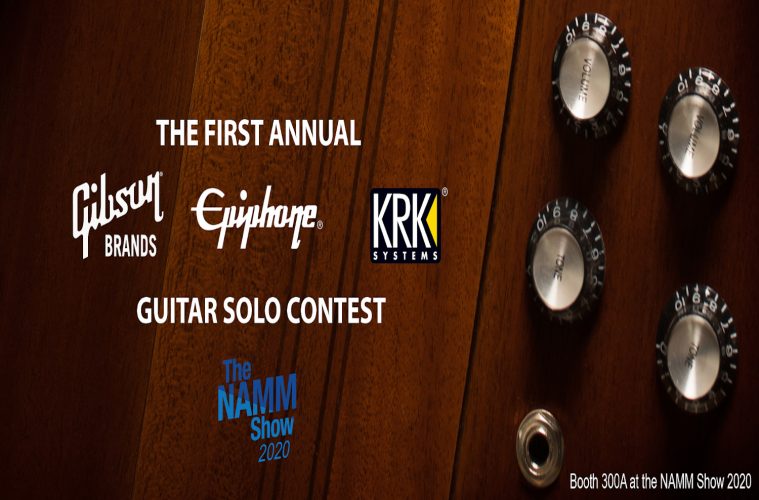 KRK Systems is joining forces with Epiphone and parent company, Gibson Brands, to host the first-annual NAMM Guitar Solo Contest at the Gibson booth (300A) during The 2020 NAMM Show. Contestants can sign up daily at the KRK section of the Gibson booth from 10 a.m. to noon.

From the sign-up, 10 contestants will be selected on a first-come, first-served basis, and two contestants will be selected randomly, all to perform between noon and 3 p.m. each day. During the performances, each contestant will have 15 minutes to prepare and compete. This includes selecting their guitar and digital amp tone, taking two practice runs over the simple 30-second music composition, and finally performing live in front of NAMM-goers through a pair of KRK ROKIT G4 10-3 three-way monitors on the third and final take. All final takes will be recorded live on-site.

Each day, after the final 12 daily performances, the recordings will be judged on specific criteria by a panel of Gibson employees and endorsed artists. One winner per day will receive a pair of KRK ROKIT G4 studio monitors, KRK KNS Headphones and other Gibson and Epiphone swag. Winners will be announced daily at 4:30 p.m. at the KRK booth and on social media. They will also be contacted by a Gibson representative who will coordinate the shipping of the daily prize. The winners do not have to be present to collect the prizes.

Following the completion of The NAMM Show, each daily winner will be entered into a final, grand prize round of the competition where one grand prize winner will be awarded an Epiphone guitar, along with bragging rights for the year.