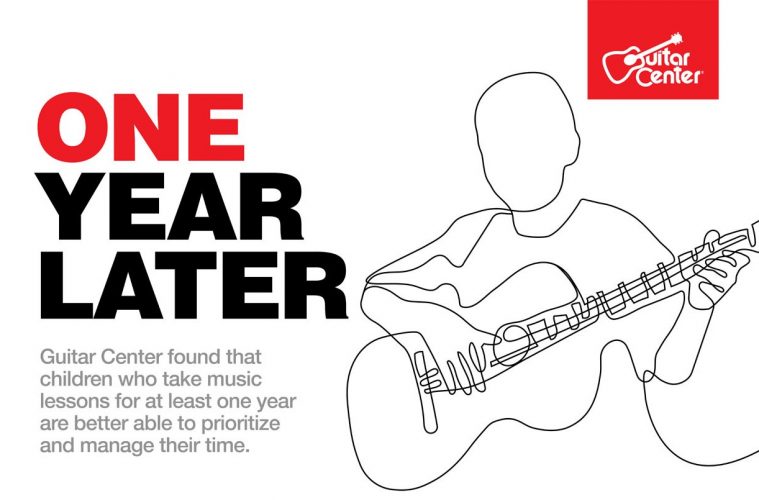 Supplemental music lessons have a profound effect on children ages 7 to 17, according to a new study commissioned by Guitar Center. Specifically, the study found that students participating in supplemental music lessons enjoy a variety of positive effects and healthy habits, including self-imposed limitation of screen time; increased problem-solving skills, time management and prioritization; increased self-awareness and social skills, and more.

“A growing number of parents, researchers and technology advocates acknowledge that limiting screen time in favor of other pursuits such as music aids in the healthy development of children,” stated Donny Gruendler, Guitar Center vice president of education. “In this study, we found that students in outside of school supplemental music lessons are far more likely to balance their own screen time rather than doing it simply because they are made to do so by a parent or caregiver. That is, regularly scheduled music lessons can help build healthy after-school habits and time-management skills that students may otherwise forgo in favor of other leisure pursuits. Altogether, such habits result is a number of additional beneficial life skills and reinforces what we’ve known for some time: studying and playing music has benefits far beyond the mere learning of playing a musical instrument, and its ripple effects result in happier, healthier, more balanced children.”

Additionally, after just a year of taking private music lessons, the study found that for students ages 7-17, these lessons:

The online study commissioned in July 2019 surveyed a total of 2,323 parents respondents across the United States, “Examining Parents’ Perceptions of the Self-Regulatory Behaviors, Self-Determinative Screen-Time Use, and Engagement with Screen-Based Personal Learning Environments for Adolescents Participating in Private Music Study,” was authored by Brian C. Wesolowski, Ph.D. (University of Georgia Hugh Hodgson School of Music), and Stefanie A. Wind, Ph.D. (University of Alabama College of Education). The selection criteria included parents of adolescent children ages 7-17 who were currently participating in private music lessons through either a national music store, local independent music store, music institute, or with a private independent music instructor.

“In this study, we used psychometric methods that allowed us to measure parents’ perceptions of their children’s level of self-regulation, self-determination, and engagement with personal learning environments to enhance their learning. Our methods took into account the pattern with which parents responded to survey items in order to estimate how they perceived the abilities of their children with regard to these three constructs,” Stated Brian C. Wesolowski, Ph.D., and Stefanie A. Wind, Ph.D. “For all of the constructs, we found that parents of children who participated in music lessons for over one year perceived statistically significant higher levels of all of the behaviors compared to parents whose children participated in lessons for less than a year. This difference was substantial for all of the constructs that we measured and persisted across socioeconomic, race/ethnicity, and gender groups.”