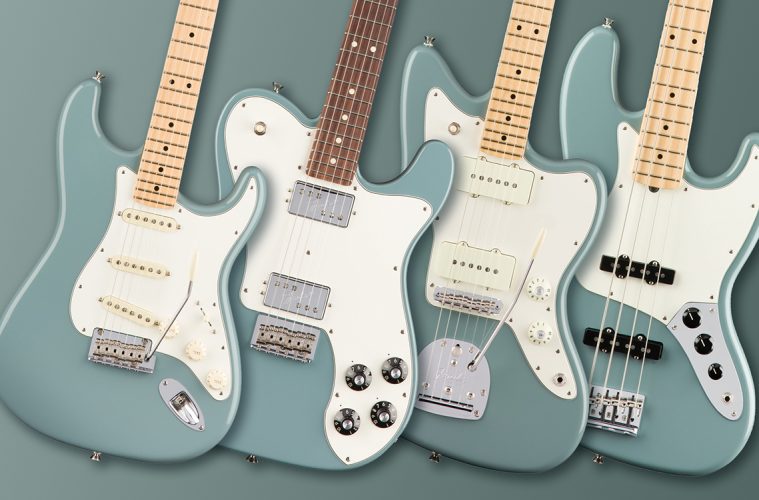 When an iconic brand like Fender launches a new flagship guitar line for the first time in more than 30 years, it’s worth taking notice. Since its debut in 1986, Fender’s American Standard Series has been one of the definitive electric guitar lines for hobbyists and professionals alike; however, the company decided to change things up for 2017. Enter Fender’s new flagship: the American Professional Series. Featuring upgraded and reimagined versions of Fender’s most well-known electric guitars and basses, the American Professional Series freshens up these legendary instruments for a new generation, while remaining true to the spirit of the originals.

The various design changes in the American Professional Series resulted from extensive deliberation and testing, as well as from feedback from Fender’s stable of artists, and a desire to capitalize on new trends in electric guitars and basses. “The product team has been working on this for the better part of two years,” Evan Jones, Fender’s Chief Marketing Officer, revealed. “Music is constantly changing, and players are constantly evolving with their needs. So, a big part of it was to serve the needs of players who are taking guitar to all sorts of interesting and different places.” He added, “With the trend toward offsets and increased adoption of alternative silhouettes, including the Jazzmaster and the Jaguar in the new flagship line was key for us.”

In addition to broader trends in the guitar market, Fender also wanted to capitalize on how electric guitars are used in contemporary music. “It was important for us to pick a name that was representative of where we see guitar in music—where we see guitar in culture—while also speaking to the expansion of what it means to be a guitar player today,” Jones explained. “It’s about using guitars in diverse ways. We are seeing the traditional lines of genre blurring. The definition of what it means to be a guitarist is expanding today, as music evolves. It’s critical for Fender to be at the heart of it.”

The standard features of the American Professional Series arose from Fender’s holistic, collaborative approach to product development. “We work very collaboratively, and we come into work every day thinking, ‘How can we make it better?’ Everything evolves from that ethos,” Norvell affirmed. “The design challenge of being Fender and having all of these iconic designs is also our greatest asset. So, it’s an exercise in stealth and subtlety. For us, it’s all about ‘coloring inside the lines,’ where we leave what players love and celebrate about our instruments intact, while making improvements in ways that only enhance what’s already there.”

The biggest change made to the American Professional Series probably centers on new neck shapes for all the models across the line. All American Professional electric guitars feature a “Deep C” neck shape. “The Deep C neck is a super-comfortable shape based off some early ’60s tapers, and it gets thicker and more substantial as you go up the neck,” Norvell explained. “And then there’s added wood at the neck joint for increased stability and tonal transfer between the neck and body.”

The decision to incorporate the Deep C neck was the result of extensive testing at Fender’s Artist Relations Office in Burbank CA. “We had a ton of neck options that were served up,” Norvell added. “I think we had 10 or 12 different shapes that we had artists try out in sort of a blind taste test. There was a universal gravitation toward that Deep C neck, which we eventually went with.” Both the Jazz Bass and the Precision Bass also feature new neck shapes. “We have a super-slim neck on the Jazz Bass, and a nice, big neck on the Precision Bass, modeled after some of our most requested and popular shapes,” he noted.

In addition to the new neck shapes, all the new American Professional Series models feature narrow-tall frets (except for the Fretless Jazz Bass model) that enable easier fretting and string bending, as well as genuine bone nuts and redesigned pickups by Tim Shaw, Michael Frank and Michael Bump. “We were thinking about how most pickup sets use one uniform magnet, despite the fact that there are 18 different polepieces on a Stratocaster, for example,” Norvell explained. “We wondered if the sound and balance could be optimized for each string in each pickup location more like a mixing desk, where each position could be ‘tuned’ to perfection. So, that’s what we did.” He added, “Some of the new guitars have three different magnets on them, and multiple magnets within a single pickup. They sound phenomenal!”

The American Professional Series also marks the debut of three new finishes: Sonic Gray, Antique Olive and Mystic Seafoam. “When we launched the American Elite Series and Offset Series, one of the things we wanted to test was whether a range of more vibrant, interesting colors could find a home with a younger consumer,” Jones remarked. “And I think the feedback we got was a definite yes.” He continued, “One of the the biggest trends we’ve seen is the influx of female players into the guitar market. It started with acoustics five…10 years ago. What we’re seeing now, we suspect, is that, as those consumers have come in and gotten more familiar with guitars, they’ve started to migrate over to electrics.”

Jones explained, “For us, that’s exciting, because we want to make sure we’re driving excitement back to retail. Not only for the players who have been around a long time, but also for the next generation of players, we want to give them a reason to come into the category and, ultimately, find their way to retail.” He added, “That’s why, with the American Professional Series, we’re leading with multiple colors, such as Sonic Gray, Antique Olive and Mystic Seafoam. We think consumers are gravitating toward those more aggressive colors in a big way.” According to Jones, “As a whole, we’ve found, through our introduction of American Elite Series and Offset Series guitars, that color allows us to drive energy into a line, while keeping Fender on trend to appeal to the broadest number of players.”

The American Professional Jaguar and American Professional Jazzmaster have V-Mod single-coil pickups, and they also boast an improved tremolo and bridge with a screw-in arm, as well as brass Mustang saddles that stabilize the strings. Both the Jaguar and the Jazzmaster also have their own treble bleed circuits tailored to each guitar’s unique voice.

The American Professional Jazz Bass features V-Mod single-coil pickups designed by Michael Bump, as well as redesigned tuning machines that create an optimum break angle over the nut. That increases sustain and tuning stability, while also reducing buzz. Posiflex graphite rods run the length of the neck for added support. The Jazz Bass is also offered in left-hand and fretless variants, as well as the American Professional Jazz Bass V five-string version.

MSRPs for all models in the American Professional Series range from $1,399.99 to $1,599.99. Color options across the line include the new Sonic Gray, Antique Olive and Mystic Seafoam finishes, as well as Three-Color Sunburst, Sienna Sunburst, Black, Olympic White, Crimson Red Transparent, Butterscotch Blonde and Natural. Color availability varies by model and style.