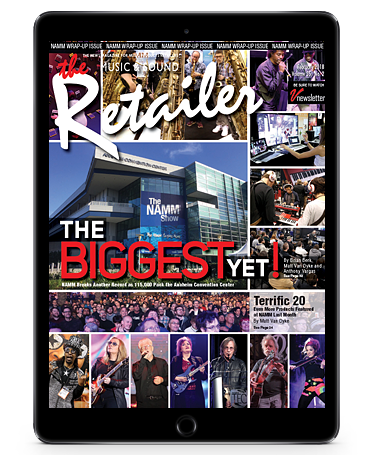 NAMM attendance spiked by more than 9 percent to a record 115,085 attendees, and exhibitors totaled nearly 2,000 last month in Anaheim.

Get ready for an interview with not one, but two Peavey executives. Both Peavey Founder and CEO Hartley Peavey and Chief Operating Officer Courtland Gray join us this month.

MI Spy takes it to central Ohio to visit the home of the Ohio State Buckeyes: Columbus. Will German Village Music Haus, Bluegrass Musicians Supply, Guitar Center or Sam Ash score a touchdown this time around?

The Music & Sound Retailer takes a look at the storied 135-year history of Gretsch.

We don’t stop there. Also on tap is a look at QSC’s golden anniversary.

As margins continue to dwindle, Allen McBroom says retailers must turn to the used gear market.

We head deep into the heart of Texas to take a look at Texas Music Emporium, whose owner is an auto mechanic by trade.

Mason Music’s Will Mason joins the Retailer for his first column, and takes a look at how to hire the best employees at your store.

Despite internet competition, Dan Vedda reaffirmed that, during the holiday season, customers want to shop in a “nice” environment with helpful people who can help them pick out the right present.

Fender had a huge NAMM Show with tons of product launches. We take a look at one of the hot releases, the American Original Series.

For our second edition of this new column, we spend some time with Tony Price, vice president of sales for Roland Corp. U.S.