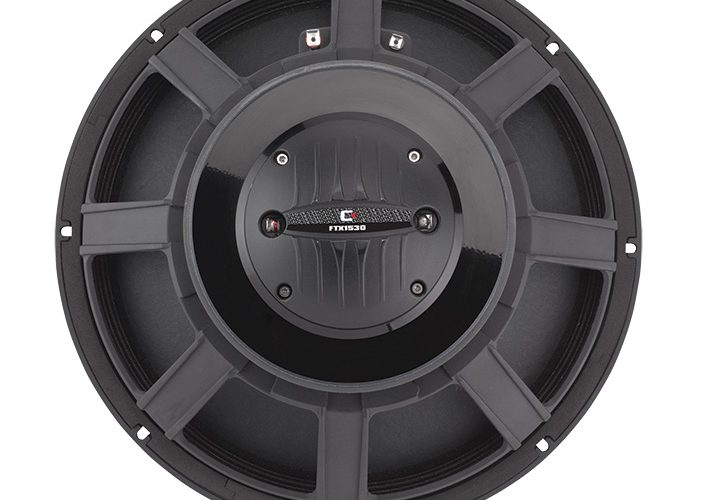 Celestion’s FTX Series brought an array of technological innovations to the speaker market when it first launched in 2014. To offer a more complete range of solutions, the company has added two new driver sizes to the line—the 10-inch-diameter FTX1025 and the 15-inch FTX1530 join the previously released 12-inch FTX1225, 8-inch FTX0820 and 6.5-inch FTX0617.

According to John Paice, Celestion’s Marketing Communications/Artist Relations Manager, “The FTX Series came to be after we noticed an emerging market trend for coaxial, sometimes called dual concentric, drivers. These are nothing new; they’ve been around for many years, but we believed we could put our own stamp on the technology.”

That stamp is the FTX Series’ Common Magnet Motor Assembly, which uses the same magnet for both low-frequency (LF) and high-frequency (HF) elements to enhance the inherent benefits of coaxial speaker technology. “Through our FEA [Finite Element Analysis]-based process and the development of what we call the Common Magnet Motor structure, we believe we have produced a range of coaxials with lower distortion and enhanced coherence, and overall better sound quality than what was previously available,” said Paice. The Common Magnet Motor Assembly also reduces the unit’s weight and offers a smaller driver footprint.

Using the same magnet for the LF and HF elements enables a number of design tweaks that enhance the FTX Series’ overall performance, even when compared to other coaxial speakers. “Coaxial speakers concentrically align low- and high-frequency drivers, enabling them to act as a ‘single source,’” explained Paice. “Celestion’s Common Magnet Motor Assembly powers the LF and HF components with the same magnet assembly. This enables the voice coils of both elements, hence their acoustic centers, to be brought even closer together. That configuration delivers further improvements in signal coherence and time alignment, the result being a more natural-sounding audio reproduction.”

The FTX Series also offers improvements to signal alignment when compared to two-way models. “In the traditional two-way system,” said Paice, “the HF and LF originate from different points, so they will have different path lengths (distance between speaker and listener) and time alignments. For the coaxial speaker, HF and LF path lengths are almost identical, and the time alignment is very similar. So, the sound output should have greater clarity, with an off-axis response that is more consistent as the listening angle varies.”

These characteristics make the FTX Series well suited to many general-purpose sound-reinforcement applications, as well as a variety of more specialized uses. “These products are first and foremost dedicated sound-reinforcement speakers,” said Paice. “They excel in applications where a focused, coherent sound signal is required. Think of the new generation of experiential movie theaters where sound effects are beamed at the movie-goer with great accuracy—you could well be listening to an FTX speaker. For more general full-range applications, these products excel where a very compact solution is required—something less bulky than a conventional two-way solution.”

“Another interesting application development is in the growing world of digital guitar (and bass) amplifiers and emulators,” he continued. “These products are using sophisticated signal processing techniques to accurately emulate different amplifier and speaker combinations, with output being sent through so-called full-range, flat-response speakers. This is another natural fit for the FTX range.”

In addition to the series’ hallmark Common Magnet Motor Assembly, FTX drivers also boast a number of unique features that further distinguish them from other coaxial speakers on the market. For example, all FTX models are built using Celestion’s Sound Castle soft-clamping assembly. “The Sound Castle soft-clamping assembly ensures even clamping pressure on the diaphragm surround, while actively reducing stress on the diaphragm during operation,” said Paice. “This contributes to lower distortion and even greater reliability of performance. It also enables the full internal volume of the rear cover to act as a loading chamber for the diaphragm, resulting in superior mid-band response.”

The FTX Series’ design also features demodulation rings, which minimize the effects of power compression and voice coil displacement. “During normal operation, the speaker’s voice coil moves up and down inside the magnetic gap of the motor, causing the cone to move and sound to propagate,” explained Paice. “However, there are side effects. The coil’s motion causes a modulation of the magnetic flux within the gap. It will also appear as if it were a variable inductance, which affects the overall efficiency of the system. By using demodulation rings, we can exert some control over this, reducing the magnetic flux modulation and making the variation of inductance more linear, and hence more predictable. The overall effect is a reduction in distortion.”

When asked about future developments in the FTX Series, Paice hinted that some big things may be on the horizon. “The next step is to migrate the Common Magnet Motor technology from the cast frame format to a range of pressed-steel products, the TFX range. This will provide a similar range of benefits for more cost-sensitive applications,” offered Paice. “Following that, we will be looking at neodymium magnet variants for applications that demand a lighter-weight solution.”