Brothers Guitar Shop: Concrete Jungle Where Dreams Are Made Of

Also in New York City, Brothers Guitar Shop is a new MI store that opened in Manhattan’s Upper East Side in November.

Shawn Gorelik and his older brother, Frank, have been in the retail business their entire lives. They watched their father run a hardware store that they eventually took over, and went on to open a second shop of their own. The two brothers are also both music lovers. Shawn was a guitar player from a young age, and Frank took it up about four years ago. “Once he learned to play, we were able to jam, and it got a lot more fun,” said Shawn.

The worlds of music and retail collided when Shawn and Frank decided to hire an experienced guitar technician named Joey Rodriguez for a position in the family’s hardware stores in 2017. Rodriguez, whom Shawn calls “a brother from another mother,” had previously worked on guitars at Sam Ash, and having that skill on his resumé piqued the brothers’ interest.

“We were passionate about guitars and collecting to begin with. One thing led to another, and the next thing you know, we have 50 guitars in the hardware store to repair,” said Frank. “So, the business grew organically.”

The repair business flourished in the back of the hardware store, eventually growing to also include buying and selling guitars online. Soon, the music business needed a space of its own. With that, Brothers Guitar Shop was born.

The fact that Shawn and Frank sought to open their first MI shop during the height of a global pandemic brought some challenges, as well as some lucky breaks. “We got lucky that, because of the pandemic, rents are so low right now. We were able to take advantage of that,” said Shawn.

The 800-square-foot shop opened on Manhattan’s Upper East Side in November 2020. According to Shawn, the railroad-style store was an “empty canvas,” and the brothers designed a retro-themed store with 1970s-influenced flourishes and fixtures that they built themselves. “Our vision is straight from the heart,” he continued. “It’s a representation of ourselves, and that’s really rewarding.” The store’s staff of five includes the Gorelik brothers, Rodriguez (who is now the lead guitar tech), a part-time helper and a part-time social media person.

The narrow shop isn’t ideally shaped for social distancing, but the brothers were able to take advantage of a recent New York City initiative to open up shopping on city streets. “We love street fairs and that kind of atmosphere, so we set up tents outside and applied for outside vending,” said Shawn. “We had a grand opening with a concert outside and held another outdoor concert around Christmas,” added Frank. “We open the door and greet people as they walk by because we want to interact with people on a personal level.” 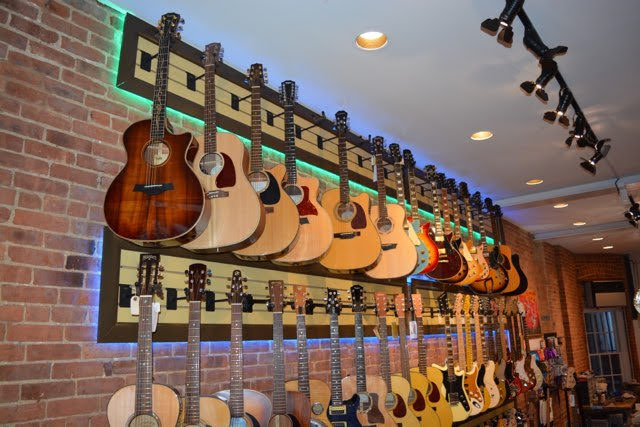 Those who enter the shop find a continuation of that warm, personal atmosphere in what Shawn calls a “stigma-free zone.” “Our customer service philosophy is that anyone who is interested shouldn’t feel awkward coming in,” he continued. “We want to help everyone, whether you have no experience or if you’ve played for 50 years.”

“In other guitar shops, people can feel uncomfortable. It can be intimidating when all you see on the wall are $5,000 guitars and up. When beginners come in here, we sit down with them and teach them chords,” said Frank. “We have a product offering for everyone,” he continued, adding that the shop likes to extend its local, family-run philosophy to the instruments they stock, spotlighting New York-based manufacturers like Electro-Harmonix and D’Addario.

With an eye toward always cultivating and expanding the music community with their shop, Shawn and Frank have continued to find new ways to expand the store’s reach, including adding lessons programs and workshops. They designed an open-platform concept where customers can walk right up to the guitar tech and see what he’s doing. “It’s very different speaking to the tech versus speaking to someone at the counter,” Shawn explained.

When the pandemic began, the brothers recognized that people were stuck at home, and they tapped into an idea from the hardware industry and offered a pickup and drop-off service for guitar repairs. “We realize New Yorkers want the most convenient option, so that’s where the delivery idea came from,” explained Shawn, who plans to continue and expand the program in the future.

The brothers also have plans to offer production services, set up live streams for local musicians “because they have no outlet right now,” and build more custom instruments, while documenting the process for social media, of course. “A lot of our success has to do with our online and social media presence making us visible for people to see us. We’ve been active with customers on social media, putting out content every day,” said Shawn, who has made sure the store has a presence on platforms like TikTok and Instagram to reach up-and-coming generations of players. “It seems like the music industry is a kind of old-school business, like [the hardware business], but we want to use the technology available to us. We want people to know we’re here and what we’re about.” 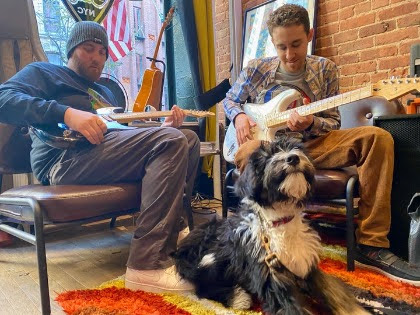 Having grown up together in retail, becoming partners in business and music alike has been a rewarding experience for Frank and Shawn Gorelik, with Frank noting, “Brothers working together can sometimes be hectic. It’s a complicated thing, but we love working with each other.”

Tapping into that brotherly love and shared passion for music has helped Brothers Guitar Shop to quickly become an integral part of New York’s music community.

“We’re on the same page for the business and how we envision it growing,” said Shawn. “We look at each other and smile when a customer has a good experience. It’s a joyful thing to listen to music all day.”

Frank concurred, “It’s not about money; this is a passion project. We want to bring the community together. Music is life.”