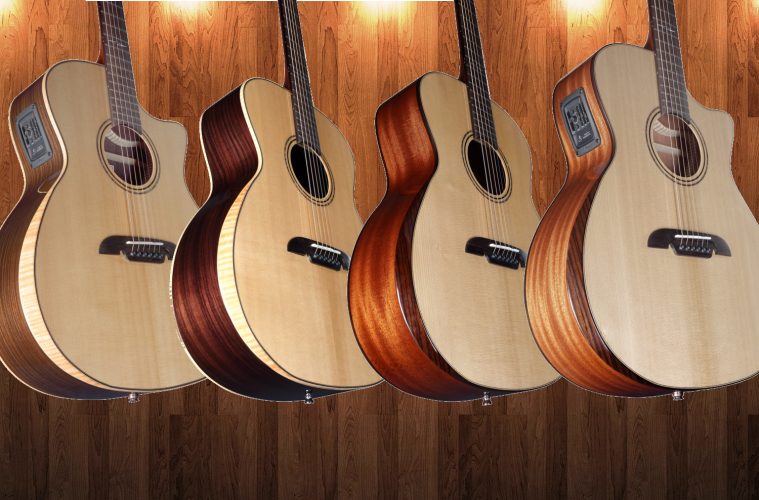 Guitar manufacturers have many options, including new neck shapes, cutaways, softer strings and smoother frets, when it comes to increasing comfort for guitarists.One comfort-enhancing option that seems to be having a moment as of late is the built-in armrest. Owners and operators of brick-and-mortar music retail stores have been seeing a lot more armrest guitar offerings recently. However, they might not know the benefits that the product category provides, or how to explain to potential customers how an armrest guitar can change his or her guitar-playing experience for the better.

According to Chris Meikle, Head of Development at Alvarez and Senior Vice President of St. Louis Music (Alvarez is a St. Louis Music brand), “When you’re playing a guitar for a long time, the big pressure point is underneath the strumming arm. Reducing that edge with a bevel makes it more comfortable.” He added, “For some players, depending on their body size, a bevel may actually make the guitar easier to play.”

With those benefits in mind, Alvarez’s new line of AG/AR Artist Series Armrest Models makes player comfort a top priority. But, although the beveled armrests of the guitars are indeed functional, they also take the look of the guitar to a level of sophistication not often seen at this price point.

“Without a doubt, an armrest allows the maker to add some flourish to the design,” Meikle explained. “So, it’s not just the comfort that appeals to the player, but also the aesthetic.” He continued, “It allows us, as a maker of primarily affordable instruments, to show how much we can do. We can take an idea like an armrest, which originally came from great luthiers in the past, and we can show that we’re able to attain high quality in that style and, through some careful considerations, make a guitar with a street price of $399.”

One of the major design process focal points for Alvarez’s AG/AR Artist Series Armrest Models was working to differentiate the guitars from other armrest offerings in the greater guitar market. According to Meikle, “I started armrest development over two years ago, and we were going to launch them at the NAMM Show in 2016. But, I delayed it because I thought that we hadn’t differentiated ourselves enough among competing armrest models at the time. We were too ‘me, too.’” He continued, “So, we went back to the drawing table and made a more beautiful and more comfortable armrest. We improved the natural radius of the bevel, so the armrest looks more elegant and offers something better than many affordable guitars that were already in the marketplace. Compared to many armrest bevels, we believe ours is more elegant and natural to the shape of the guitar.”

Meikle added, “The challenge with making the armrest models was in making the bevel slimmer and more elegant. In doing so, we were working with less material. So, we had to be more careful, precise and efficient. Finding the balance between craftsmanship and efficiency is something we always spend time on.”

Alvarez rigorously tested the new armrest guitars to ensure their durability and playability. “Speaking to the stages of development, we build several sets of samples and test them from a player’s perspective, and we also test for stability and structural integrity,” Meikle offered. “We do a series of stress tests, along with drying and humidity tests, as we go into preproduction. When we know we have it right, we go on to production.”

Two AG/AR Artist Series Armrest Models are available: the AG60AR and the AG70AR. The AG60AR features an A-plus-grade solid Sitka spruce top, mahogany back and sides, and a rosewood armrest. The AG70AR has an A-plus-grade Sitka spruce top, rosewood back and sides, and a flamed maple armrest. “The difference between the two is the tone from the different combinations of tonewoods, as well as affordability,” Meikle said. Both models are grand-auditorium guitars. “Grand auditoriums have a shape that is very versatile, because they’re big enough to generate the air volume needed to get great tone,” he explained. “They’re smaller than a dreadnought, and they curve more, so they’re great to put an armrest on.”

The AG60AR and AG70AR both feature a scale length of 25.5 inches and 21 frets, with a one-and-three-quarter-inch nut. “One of the reasons we use an inch-and-three-quarter nut is so the guitars welcome fingerpicking as well as strumming, so they can be as versatile as possible,” Meikle said.

Alvarez’s AG/AR Artist Series Armrest Models are available in either acoustic or cutaway acoustic-electric versions. The acoustic-electric models (AG60CEAR and AG70CEAR) feature LR Baggs electronics. The AG60AR carries an MSRP of $599 ($749 for the AG60CEAR), whereas the AG70AR has an MSRP of $699 ($849 for the AG70CEAR). All versions are currently available in natural finish.