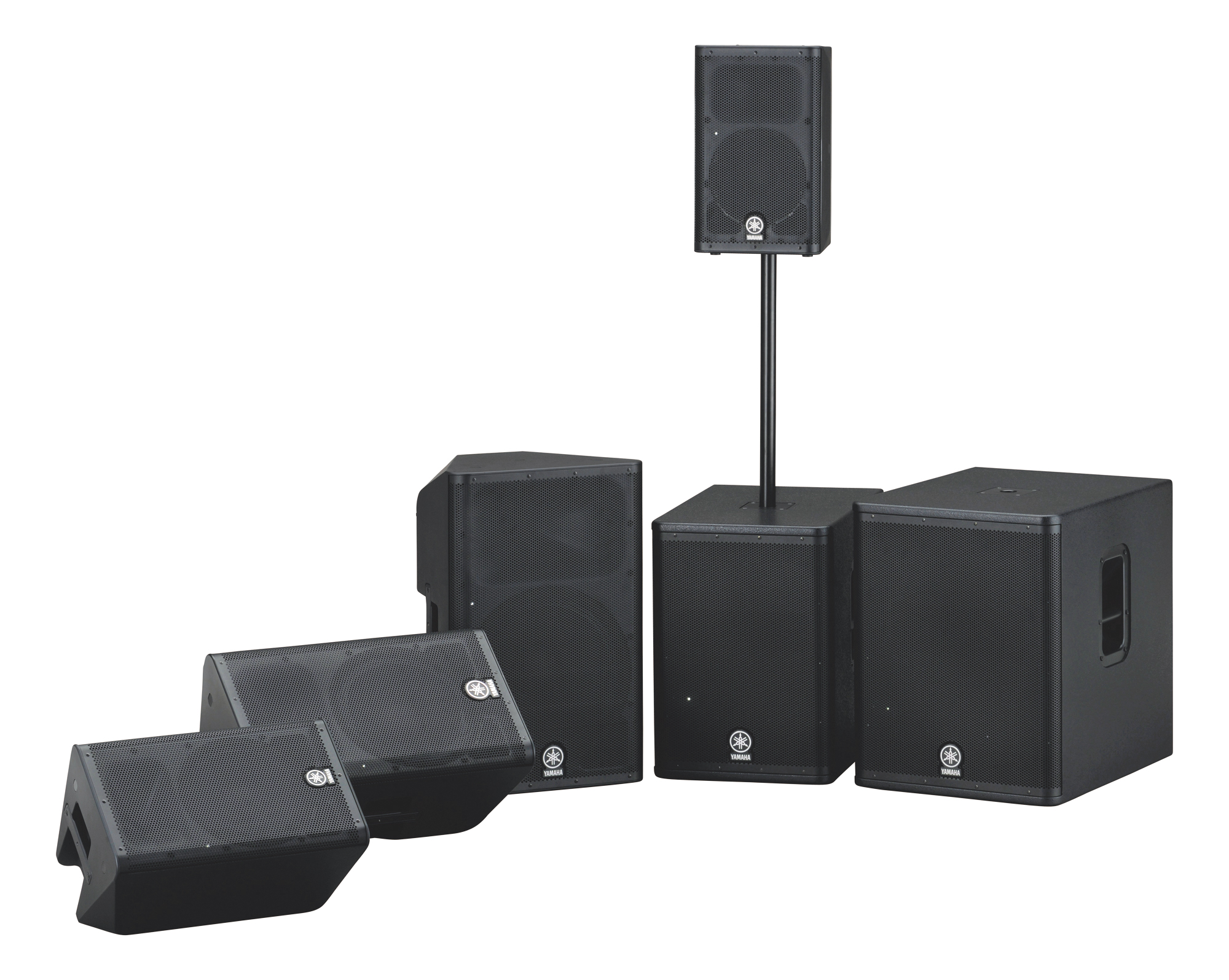 When a company such as Yamaha, which possesses all the resources of being an established industry leader with a global reach, goes to Winter NAMM with a high-profile product series to unveil, one can be pretty confident that the market is in for something big. And that most certainly was the case last month in Anaheim, where Yamaha introduced its DXR and DXS powered speaker and sub line. These products, which, in the words of John Schauer, Product Manager, Live Sound, Yamaha Pro Audio & Combo Division, are the “little brothers” of Yamaha’s flagship DSR products, are real game changers.
The series encompasses six models: the DXR8, DXR10, DXR12 and DXR15, plus the DXS12 and DXS15. According to Wayne Hrabak, Marketing Manager, Live Sound, “Various combinations of those systems can meet a broad range of desired applications for users. In the case of mobile DJs, for instance, using 8s or 10s as the top boxes, paired with the 12- or 15-inch subs, provides a very small, lightweight, compact system.” When asked about ideal users for the products, Schauer, too, mentioned mobile DJs, but also cited musicians, sound companies that have smaller gigs and rental houses as being among prospective purchasers.

The affordable price points the series boasts belie just how much technology each model packs. For instance, the new speakers allow for mixing capabilities right on the back panel. “The idea of having a small mixer on the back of the powered speaker was something of a new design,” explained Schauer. “We’re not the first to do it, but we have some interesting twists to ours.” He continued, “We will accept any input, whether it is a mic-level, quarter-inch from a keyboard, RCA from a CD player or an MP3 player…all those things can be accommodated.” Each channel has its own level control and MIC/LINE switch, allowing users to tweak their settings. The LINK function lets users configure a stereo or dual-mono system using two DXRs.

FIR-X tuning derived from Yamaha’s DSR speaker line helps ensure that the DXR series delivers excellent sound. “The end user gets a flat phase response,” explained Schauer. “In other words,” he continued, “every frequency coming out of the box at the same time. So, there isn’t a dip or peak around the crossover region between the two drivers.” This is a distinguishing characteristic particularly because of the price range in which this series places. Schauer remarked, “Frankly, FIR filters were originally done in commercial audio…products that cost in the five digits. This type of processing had been incredibly expensive, but, now, Yamaha has been able to put it into end products like these.”

The new speakers boast advanced DSP, as well, which helps to ensure that users get the absolute most from the products. Schauer explained, “With DSP, we’re able to do several things. First, we can protect the unit: its power supply from overheating, the amplifiers from being damaged and, of course, the drivers from being hurt.” He noted that DSP allows the output of the loudspeaker to reach new heights. “The actual sound pressure levels are maximized by using it,” he affirmed. Additionally, Yamaha has added D-Contour, which, as Schauer explained, essentially means that, as you lower the level signal sent to the speaker, low frequency and high frequency are boosted logarithmically. “So,” he remarked, “you pull it down and the boost comes in. As the input level increases, it goes back to flat. The idea is that it stays a nice, warm-sounding, musical loudspeaker.”

The D-XSUB feature on the DXS subwoofers, a newly developed processing technology designed specifically for the subs, dynamically controls the low frequency range. A BOOST mode provides enhanced punch to the sound, whereas an XTENDED LF mode enhances the bottom of the low frequency range. The selection will depend upon the type of applications and musical genres. Wayne Hrabak discussed the importance of the subs being able to match their siblings in terms of performance power. “Because the full-range cabinets can produce such high SPL levels, the subwoofers have to keep up with them,” he emphasized. “The only way you can really do that is with DSP control.” Continuing, he added, “You can get incredibly high amounts of low-end response out of these small 12-inch and 15-inch enclosures. You would swear it was at least an 18-inch.”

There are, of course, many questions that naturally arise when one is checking out a new speaker and sub series—any number of specs and variables spring to mind—but, ultimately, what matters most is simple: Do the boxes sound good, in every situation, at any volume, every time? And this metric is where the new Yamahas really stand apart. “For the size of the enclosure, how much they weigh and the way we’ve integrated the DSP in with the amplification system in the loudspeakers themselves,” began Hrabak, “the most noticeable thing is that, as you increase the level, the sound quality remains identical.”

“With many competitive products,” Hrabak continued, “as you turn the level up to where you’re challenging the amplifier or whatever protection is in the box, the actual sound quality in the sound will change. It might become edgy, or you might actually hear the amplifier begin to shut down on itself. That then changes the quality of the sound.” However, he added, in the case of the DXRs, “no matter how loud you play the system, the sound quality always remains the same.”

Schauer referenced the brain trust available to a corporation on the scale of Yamaha, stressing the degree to which it helped make these products even better. “This is probably one of the most developed products we’ve ever done,” he remarked, the statement carrying more weight given his 25-some-year tenure with the company. From listening sessions in Japan to several in the United States, plus trips to Paris to draw on the talents of the NEXO “golden ears,” the meticulous development process helped the products to achieve absolute excellence.

Hrabak aptly summed up the pride and confidence Yamaha has in the DXR and DXS models, saying, “We have compared these speakers to everything else that’s currently available under $1,000.” The conclusion? “We can look anybody in the eye and say, ‘Try to outperform these’.”