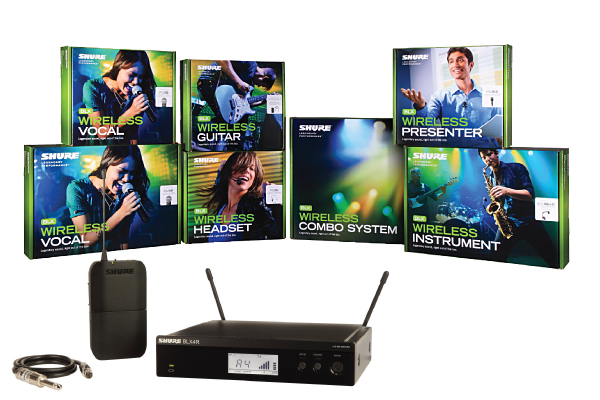 Shure, founded in 1925 and renowned for its microphones and audio electronics, including products that, like the SM58 vocal microphone, have become veritable legends, has not slowed its aggressive pace of product innovation, coming up with exciting new launches at seemingly every trade show. Shure unveiled one of its newest introductions—BLX Wireless Systems—at January’s NAMM show and, now available to the MI retail channel, the series is already generating excitement. It combines high-quality design and construction with easy set-up and operation, delivering reliable, rugged wireless performance. To get more details, The Music & Sound Retailer spoke to Erik Vaveris, Category Director for Wireless Products, and Mike Nagel, Product Manager, Wireless Products, both of whose enthusiasm for BLX was immediately evident.

“We were trying to raise the bar in performance for affordable wireless,” responded Vaveris when asked about how BLX had been initially conceived. “We challenged ourselves to deliver a level of audio quality and stability that rivaled much higher-end systems.” He remarked upon the excitement of the development process, saying the engineers continually came up with innovations and improvements to facilitate the series’ principal goal: making great performance available to everyone, in terms of both technical accessibility and affordability. “For a customer who wants to be wireless because they want the freedom of movement and to look more professional,” Vaveris began, “the BLX system gives them really professional-grade audio quality, outstanding RF performance and reliability, and does it all in a simple, easy-to-use package.”

Nagel was actually working the NAMM show when BLX bowed, and thus got a firsthand look at how prospective retailers (and customers) reacted. He noted that one of the big “wows” was how much ground the series covers in terms of options. Transmitter options include the BLX1 Bodypack Transmitter and the BLX2 Handheld Transmitter; both boast lightweight, rugged construction. The BLX1 has a TQG connection for use with Shure lavalier, headset, earset and instrument microphones and guitar cables. Also in its feature set are a tactile on and off switch and adjustable gain control. The BLX2 has integrated microphone capsule options that include Shure’s PG58, SM58 and Beta58A. It…