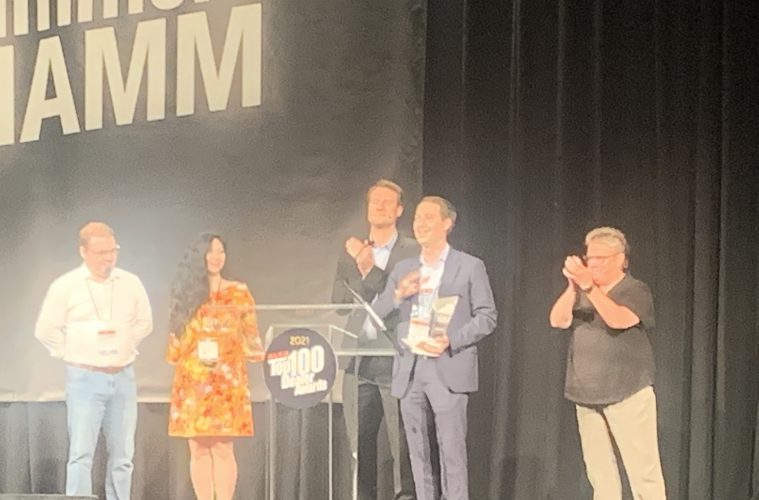 West Music on July 15 took home the coveted NAMM Top 100 Dealer of the Year award during a two-hour event at the Music City Center.

“It is absolutely an honor,” said West Music’s Ryan West. “To be among so many retailers who made it through, congratulations on such a fantastic job. To all the team members watching [on Zoom], this one is for you.”

“We have 200 of the greatest people on the planet,” added West Music’s Robin Walenta, “and we happen to have a really good one.”

The other winners during the star-studded night were:

“In the past year, we saw the world come to a near stand-still, yet the heart of the independent music retailer stood at the ready to serve its community and help to inspire, console, and provide joy at a time when so many aspects of life were changing,” stated Joe Lamond, NAMM President and CEO. “We applaud all music retailers for the vital role that they serve in their communities and beyond.”

One story of music providing a vital role comes from West Music Co., winner of the Dealer of the Year and the Music Makes a Difference awards. When the coronavirus pandemic arrived in 2020, music therapy came to a sudden halt. For one student named Payton, her medically fragile status meant that there was a new level of worry for her safety, yet Payton’s parents were eager to have remote music therapy sessions and see if that could work. Her mother says, “We are so grateful that remote music therapy sessions were an option, and West Music got them up and running for us quickly! I can’t imagine how much regression we would have seen in Payton’s skills without being able to have music therapy during this time.”

All submissions for the Top 100 Awards were evaluated for effectiveness in marketing, customer engagement, and innovation in retail by a panel of independent judges.