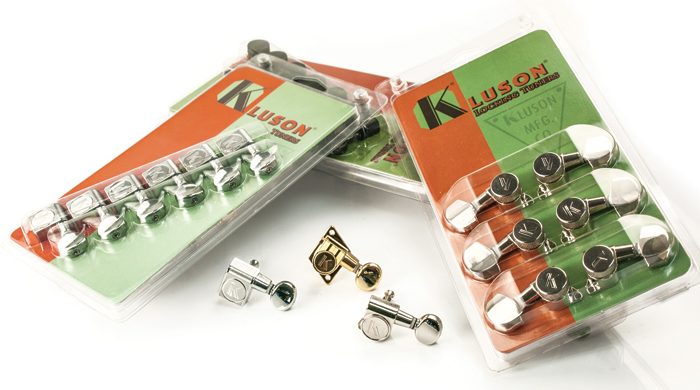 The love for, and the desire to make, music has been a hallmark of humankind as far back as we can be traced. So, it’s perhaps not surprising that a number of MI brands have long and storied histories, stretching back generations. Cymbal maker Zildjian, for example, was created in 1623; musical instrument powerhouse Yamaha was founded in 1887. Here, though, we focus on Kluson, which emerged on the scene in 1925 and came to establish relationships with every major instrument manufacturer of that era and for decades to follow. Kluson became the “go to” supplier for Gibson, Fender, Martin and Rickenbacker, to name just a few. Kluson tuners were installed on instruments prior to, and right through, the dawn of rock ‘n’ roll and the development of the solid-body electric guitar. This, of course, put them in the hands of many guitar legends.

Even the most powerful brands, though, can fall on hard times, and that’s precisely what happened with Kluson. The company declined in the 1970s and, following that, from 1981 to 1994, the brand was actually defunct. Larry Davis and WD Music Products acquired the Kluson mark in 1994, determined to give it new life. Prior to its having been acquired, Kluson hadn’t designed anything new in three decades; this, naturally, presented some challenges. Dave Lewis of WD Music, to whom The Retailer spoke exclusively, said, “By the time Larry Davis and WD acquired the Kluson mark, 25 years had passed since Kluson was a power player in the musical instrument world.” He continued, “The Kluson workers were gone, the tooling was gone and the history was scattered.”

With dedication, persistence and passion, WD Music created the new Kluson brand from the ground up. Early on, the decision was made to add quality and features beyond what the original production had offered; this is noteworthy because Larry Davis had set out to recreate the original Kluson tuners. He realized, however, they had a few shortcomings when judged by today’s standards: a low 12:1 gear ratio, a thinner button shaft that resulted in damaged tuners and a tendency toward button deterioration. Because to recreate something even while knowing there were such issues would defeat the purpose, Davis ensured that improvements were made. Gear-ratio changes offer more stability and accurate tuning. Increased button-shaft diameter helps control damage from occasional bumps. And, using more stable materials helps to ensure a longer life.

The Retailer asked Lewis to trace how the reenergized Kluson tuners were developed. He began, “We had improved the original stamped-steel designs, but didn’t have modern die-cast designs.” Early last year, the company designed a reliable, drop-in, high-gear-ratio tuner, which proved to be a success. That was the motivation for Kluson’s second design, after it was noted that there wasn’t an upgrade for Fender’s American Standard or Standard series using the two-pin mount. “We added the 19:1 gear ratio, locking and non-locking options, and our oval button for the classic Kluson look with our signature pinstripes on the housing,” he continued. Then, the F-tuner challenge hit the table. Lewis commented, “We designed a die-cast, drop-in fit featuring the new Kluson ‘Supreme’ appearance with the pinstriped housing and 19:1 gear ratio. We went with the most common to fit today’s reissues and the latter CBS-era Fender instruments that had the collar. One customer referred to them as ‘jewelry for your F tuner guitar.’”

So, in regard to the question of what WD Music could do to reenergize a nearly 90-year-old brand that had once been a staple in the music industry, the company’s answer was simple: three all-new die-cast tuning machine designs that offer high ratio, superb feel, reliability, ease of installation and cost-effectiveness, plus U.S.A.-made hardware. From WD Music’s perspective (and in the minds of virtually everyone who has experienced the products firsthand), the new offerings reach a level that far surpasses what the original had achieved. Underscoring the point, Lewis declared, “Kluson improved all the stamped-steel and die-cast gear ratios, ranging from 15:1 to 19:1; offers both locking and non-locking models in several mounting styles; improved the material used for buttons to ensure long life; and made a serious effort to achieve ease of installation without modification and with minimal tools.”

There seems little doubt that, owing to the improvements to the originals, the newly designed Kluson will regain—and build upon—its legendary stature. Kluson was reintroduced at the NAMM show this past January as a prelude to Kluson’s 90th anniversary next year. “We had several long-term goals,” stated Lewis. “Recreating the high-demand original tuners was the first step. Recording historic usage so we can provide accurate information for collectors and restorers is ongoing. For those who like the classic look in die-cast, we licensed the Kluson name to TonePros. Finally, by starting up production on the new Kluson die-cast line-up, and adding U.S.A.-made Tele bridges, ABR and Nashville-style bridges and tail pieces, we’ve added a new chapter to Kluson history.”

As mentioned, the reinvigorated Kluson made a splash at NAMM, and that’s where retailers got their first look. The first thing retailers saw was new window-box packaging and blister packs in classic colors. “These make products easy to see and really add a color splash to peg wall, floor display or jewelry-type cases,” enthused Lewis. “Plus, our new Kluson catalog is counter-friendly, with easy-to-read descriptions and hundreds of new items.” But the real eye-opener was the new die-cast tuners and U.S.A.-made hardware that fit the most common instruments and that can upgrade performance and reliability. Now, months after the show, WD Music still has the pedal to the metal. “We’re advertising the new die-cast tuners in trade magazines, sending news and updates to our ‘opt-in’ dealer e-mail database, contacting manufacturers to offer the new Kluson tuners, using social media to spread the word and, of course, standing behind them all with a lifetime warranty,” Lewis added.

It appears that WD Music is shepherding Kluson to a new golden age. Kluson is now offered by the Gibson Custom Shop on select models, and can be requested through the Fender Custom Shop. The Kluson die-cast line is currently available. Non-locking products range from $56 to $90, whereas locking products fall between $76 and $110, depending on the plating color.